The Case for Non-violent Ex-felons to Own Guns 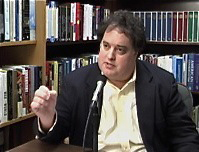 Should an ex-felon be allowed to own guns? In 2004, the North Carolina General Assembly passed a law that said no. But in August, the state Supreme Court ruled the law went too far. Daren Bakst, legal and regulatory policy analyst for JLF, agrees with the high court and recommends that lawmakers revise the law. He explains why gun ownership makes sense for non-violent ex-felons. Then we hear from a renowned syndicated columnist about his concerns for the country. We are ‘in the midst of the most radical transformation our country has ever seen,’ in the words of columnist and Fox News commentator Cal Thomas. He shares his concerns about the direction of American politics and offers some ideas for reversing disturbing trends. This year’s $1 billion tax hike means disturbing news for the North Carolina economy, according to N.C. Republican Party chairman Tom Fetzer. Fetzer blasted tax increases during a recent statewide tour. He explains why North Carolina’s struggling economy needs an alternative to higher taxes. That’s followed by a look at foreign policy. The Cold War ended nearly two decades ago, but relations between the United States and Russia have been complicated in recent years. Peter Coclanis, associate provost and history professor at UNC-Chapel Hill, says Russia’s demographic trends could lead to additional security challenges in the years ahead. And finally, North Carolina History Project director Troy Kickler explains the ‘tenthers’ movement, named for supporters of the 10th amendment to the U.S. Constitution. Kickler discusses the issue of power divided between the national government and the states, and the two diametrically opposed views of how it should or shouldn’t be followed.