The Cost Of College Students Who Don’t Graduate 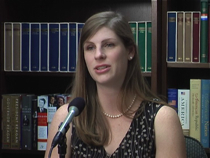 College students are taking longer and longer to graduate, and some don’t graduate at all, making this area ripe for reform in order to save taxpayer dollars, according to Jenna Ashley Robinson of the Pope Center for Higher Education Policy. Robinson explains that increasing admission standards could help pare back the number of students who don’t complete their college experience despite relying on public funding for the opportunity. Then we turn to the ongoing debate over redistricting reform. Some lawmakers from both major parties want the North Carolina General Assembly to change the way the state draws future election maps. You’ll hear Republican Reps. Paul Stam and Chuck McGrady, Democratic Reps. Rick Glazier and Deborah Ross, and Jane Pinsky of the N.C. Coalition for Lobbying and Government Reform discuss bipartisan legislation to rewrite the redistricting process. Next is a look at labor law. Pro-union contracting requirements tied to the 2012 Democratic National Convention in Charlotte prompted some Republican state lawmakers to seek changes that would strengthen North Carolina’s right-to-work law. You’ll hear highlights from a recent legislative debate on the topic. That’s followed by comments from University of Chicago economist Luigi Zingales, who says that when he saw the federal government’s response to the recent economic crisis, it reminded him of some of the worst aspects of the political and economic climate in his home country, Italy. Zingales responded with the book A Capitalism for the People. He recently shared key themes from the book during the annual John W. Pope Lecture at N.C. State University. And finally, as legislators consider reforming North Carolina’s tax system, they should be aware of several basic constitutional requirements.

Jeanette Doran, executive director of the North Carolina Institute for Constitutional Law, discusses the requirement for uniformity in tax law and the Just and Equitable Clause. She also assesses whether these requirements are followed in the current code, and how legislators can assure they are adhered to in any new code that is adopted.