The Good, The Bad, The Ugly Of Romney’s 47% Remark 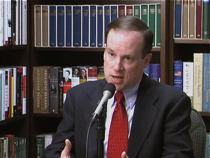 The moment Mitt Romney’s comment about 47 percent of the country being dependent on government became public, critics from across the ideological spectrum reacted. Some said his comments were a blunder. Others said he was simply repeating a common talking point made in conservative circles. John Locke Foundation President John Hood analyzes the Romney statement and points out what was correct, what was incorrect, and what was plain silly. Then we turn to the continuing debate over “green energy.” Duke Energy CEO Jim Rogers explained during the recent Democratic National Convention in Charlotte that he’s pursuing so-called green energy policies in order to help pass what he labels the “grandchildren’s test,” the notion that his grandchildren will look back one day and decide that he did the right thing. You’ll hear Rogers’ comments, along with a stinging critique from Roy Cordato, John Locke Foundation Vice President for Research and Resident Scholar. Next is a look at journalism from a veteran journalist who now functions as managing editor of Carolina Journal. Rick Henderson discusses why Carolina Journal and CarolinaJournal.com often cover stories that mainstream media outlets downplay or ignore. That’s followed by a look at state finances. North Carolina state government spends $3 billion on contracted services, and some state lawmakers want to ensure contracts of $1 million or more face special scrutiny. You’ll hear highlights from a recent debate on the topic. And finally, now that UNC Chancellor Holden Thorp has announced he will leave the post at the end of the academic year, analysts are assessing his legacy. Jane Shaw, president of the Pope Center for Higher Education Policy, weighs in on how Thorp will be viewed, as well as the qualities the Board of Governors should look for in a successor.