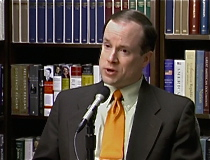 The tug-of-war between Wisconsin Gov. Scott Walker and public sector unions has stirred talk about North Carolina’s law that prohibits public sector collective bargaining. Unions want the law overturned, but local officials are wary. John Locke Foundation President John Hood explains North Carolina’s law, the history of unionization in our state, and the impact on taxpayers when unions are allowed to collectively bargain for wages and other items. Than we turn to comments from a champion of conservative principles. Many North Carolina conservatives look south of the state line for an example of a U.S. senator who’s willing to buck the Republican Party when it strays from conservative principles. That senator, South Carolina’s Jim DeMint, recently visited the Charlotte area to discuss America’s challenges, including government overspending. You’ll hear highlights from his presentation. Next is a look at a key property rights issue. As some lawmakers push for major changes to North Carolina’s 50-year-old annexation law, they’re also seeking a moratorium on forced annexation. Sen. Andrew Brock, R-Davie, explained why during a recent debate. You’ll hear his comments, along with a response from Sen. Bill Purcell, D-Scotland. That’s followed by a look at global warming zealotry. Scientists continue a fierce debate about the potential danger of global warming, but much of the discussion in public school classrooms is one-sided. Paul Chesser, executive director of the American Tradition Institute, explains how a group called the Alliance for Climate Education is trying to indoctrinate students through a series of public school presentations. And finally, John Locke Foundation Vice President for Research Roy Cordato explains that what’s called market-based environmentalism is nothing more than command and control central planning — the hallmark of socialism. Cordato explains why some well known conservatives champion the approach, much to his chagrin, and why the free market should be allowed to work.