The Need For Innovative School Superintendents 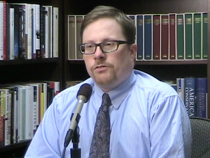 As of late March, five North Carolina public school districts were looking for superintendents, according to the North Carolina School Boards Association. Leading a school is a tough job, says John Locke Foundation Director of Research and Education Studies, Terry Stoops. He outlines the responsibilities and challenges the superintendent faces, and explains North Carolina’s troubling pattern of ‘rinse and repeat’ in which a handful of superintendents make the rounds of the counties. Stoops recommends a new strategy for recruiting innovative leaders. Then we turn to property rights concerns in North Carolina. Some lawmakers are working to repeal the controversial state Map Act, which allows the N.C. Department of Transportation to block development indefinitely for property included in official state highway corridors. You’ll hear highlights from a recent debate featuring comments from affected property owners. Next is a look at the intersection of privacy and technology.

The American Civil Liberties Union usually trumpets liberal causes, but a recent ACLU conference featured remarks from former Republican state Sen. Thom Goolsby. He outlined his concerns about potential law enforcement abuse of new surveillance technology. That’s followed by perspective from a distillery owner in North Carolina who hopes to change a state law that bans all sales outside the state’s Alcoholic Beverage Control system. Scott Maitland, proprietor of the Top of the Hill Distillery in Chapel Hill, explains the change he and his colleagues are seeking during this legislative session. And finally, we look at a legislative push to open up competition in health care by exempting some services, such as ambulatory surgical centers, from a state law that requires them to gain state permission when they wish to expand or invest in new equipment. Katherine Restrepo, the John Locke Foundation’s Health Care Policy Analyst, says the Certificate of Need law should be repealed to offer consumers more choices and to lower costs. She describes current efforts to at least pare back the law’s scope.