War On Education, Or War On The Truth? 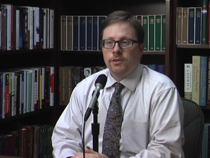 Defenders of the status quo in public education are continuing to say that fiscal reformers in the North Carolina General Assembly have damaged schools and children with their policy decisions. Not so, says Terry Stoops, the John Locke Foundations’ director of research and education studies. Stoops refutes myths spread by North Carolina progressives, such as that “cuts” were made to the education budget and that some teachers took pay cuts. Then we turn to matters of government efficiency. Six years after a state audit raised questions about a North Carolina government contract with Office Depot, including findings that the state overpaid the office supplier $300,000, State Auditor Beth Wood continues to have concerns about similar contracts. Wood recently briefed lawmakers on flaws in the state’s contracting process. Next is a look at state preparations related to the Ebola outbreak. Now that the virus has claimed victims in the United States, North Carolina health officials are making preparations to address possible Ebola cases in this state. The state epidemiologist, Dr. Megan Davies, recently shared details of North Carolina state government’s preparations with legislators. That’s followed by a look at the N.C. National Guard’s special relationships with military units in Moldova and Botswana. It’s all thanks to a State Partnership Program. Coordinator Maj. Clay Jackson explains what those partnerships mean for the European and African countries and for National Guard troops in this state. And finally, with the election just days away, most of the attention is races for the U.S. Senate and Congress. But John Locke Foundation Director of Fiscal Policy Studies, Sarah Curry, says a number of local ballots around the state will ask voters to say yes or no to raising the sales tax rate by a quarter cent. She explains where the referenda are appearing, why, and looks at several particular counties where voters are being asked the second, third, or even fourth time.