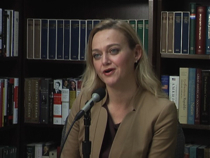 Four lawsuits have been filed against North Carolina over the election reform laws passed by the General Assembly this year and signed into law by Gov. Pat McCrory. To help North Carolinians understand the issues at play, some of which are overlapping between the suits, a new website has been created – ncvotingcases.org. The North Carolina Institute for Constitutional Laws’s executive director, Jeanette Doran, explains the importance of the website, the documents it contains, and her analysis of the likelihood of success of the suits. Then we turn to North Carolina’s unemployment compensation debt. Lawmakers have taken some heat for their decision to change the state’s system of unemployment benefits in order to pay off a debt of more than $2.5 billion owed to the federal government. During a recent legislative meeting, lawmakers learned that recent numbers show the state is on track to pay off that debt in 2015. You’ll hear details. Next is a look at state efforts at job creation and recruitment, which is a huge and costly undertaking. State government devotes $1.4 billion a year to various work force development programs. Tony Almeida, economic development adviser to Gov. Pat McCrory, recently discussed details of that spending with state lawmakers. That’s followed by a discussion of reforming the higher education system. People of all political persuasions seem to agree that something’s wrong with the American system of higher education. Conservatives have spent years calling for reforms, and President Obama unveiled his own reform ideas during a series of college speeches this fall. Richard Vedder, economics professor at Ohio University and head of the Center for College Affordability and Productivity, explains how the president’s ideas miss the mark. And finally, we delve into problems that are ahead with the Affordable Care Act – ObamaCare – with the John Locke Foundation’s health and human services policy analyst, Katherine Restrepo. She explains that problems with the healthcare.gov website pale in comparision to the policy concerns that will affect every American.