What Do The Primary Results Mean For The Fall? 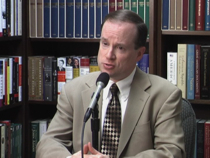 North Carolina’s primary election is in the books. Now we look to some runoffs in July and then to the general election in the fall. John Locke Foundation President John Hood analyzes the election results and discusses why so many conservatives filed for seats this cycle. Then we turn to the ongoing debate over state spending and taxing. Outgoing Democratic Gov. Beverly Perdue wants the Republican-led General Assembly to approve a sales tax hike that would raise money to fund her education goals. You’ll hear Perdue’s pitch for her budget plan, along with reaction and alternative ideas from Senate President Pro Tem Phil Berger, R-Rockingham. Next is a review of North Carolina’s vehicle fleet. North Carolina state government owns more than 28,000 vehicles. A recent report from the General Assembly’s Program Evaluation Division suggests state agencies could do more to ensure they use those vehicles efficiently. You’ll hear details from senior program evaluator Sean Hamel. That’s followed by a look at the intersection of your job and your religious faith. You may not think there is a correlations, but Hugh Whelchel says those two key aspects of our lives have very close links. The executive director of the Washington-based Institute for Faith, Work, & Economics explained those links during a recent visit to Campbell University. And finally, we look at the state’s incredible spending growth. Fergus Hodgson, the John Locke Foundation’s director of fiscal policy studies, provides the historic numbers and puts this month’s budget and spending debate into context.