Why Extending the Bush Tax Cuts Would Help the Economy 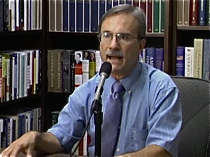 If left to expire, the tax cuts enacted during the Bush administration will end, giving Americans a huge tax hike. Some say the rich, in particular, deserve a tax hike because they don’t pay their fair share. But others, such as John Locke Foundation Vice President for Research Roy Cordato, say the tax cuts should be extended for every taxpaying household. He explains why, and he also makes a moral argument that the rich should not be deprived by government of their right to the fruits of their labor. Then we turn to the election environment. With the vote just about one month away, North Carolina’s Americans For Prosperity chapter is reaching out to voters with a series of bus tours throughout the state. A recent swing through central North Carolina carried the title “November Is Coming.” You’ll hear AFP state chapter director Dallas Woodhouse explain the purpose of this campaign, and former Charlotte Mayor Pat McCrory will explain why voting in the 2010 election is critical for the future of the state and nation. Next we turn to the economy, which continues to sputter, particularly in terms of private-sector job creation. Uncertainty about future state and federal government action has helped slow the economic recovery in North Carolina and nationwide. In a recent hearing on Capitol Hill, several economists offered U.S. senators ideas for addressing that uncertainty. You’ll hear their comments and a response from Joseph Coletti, John Locke Foundation Director of Health and Fiscal Policy Studies. That’s followed by a look at a subject many people rarely read or hear about. When you hear the word “orphanage,” you might think of Little Orphan Annie or Oliver Twist begging for gruel. But Richard McKenzie, who grew up in a North Carolina orphanage and now serves as an economics and public policy professor at the University of California at Irvine, says orphanages get a bad rap. He’ll explain why. And finally, why is the state Board of Education Chairman, Bill Harrison, being paid $90,000 to oversee the federal Race to the Top grant funds? John Locke Foundation Director of Education Studies, Terry Stoops, talks about Harrison’s new salary and why the role may well overlap with the duties of existing education staffers and the state’s Superintendent of Public Instruction, June Atkinson. Stoops also discusses the grant itself and improvements to the public education system that could be made without the federal dollars.