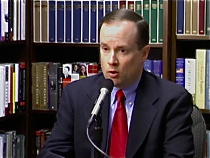 Reaction to the new congressional and legislative maps has been fierce. Some say the new boundaries drawn by legislative Republicans are unfair, pack minorities into too few districts, and are overtly political. John Locke Foundation President John Hood addresses the critique and explains the role the federal Voting Rights Act plays in determining whether the maps will pass legal muster. Then we turn to a spirited legislative debate over regulatory reform. Despite a veto from Gov. Beverly Perdue, North Carolina lawmakers are moving forward with reform. You’ll hear highlights from the N.C. House’s debate on overriding Perdue’s veto of Senate Bill 781. Supporters said the measure would help small businesses and entrepreneurs thrive, while critics said the legislation could block future regulations necessary for protection of public health and the environment. Next we delve into a point of contention over redistricting. During the debate over new maps, a key dispute involved race. Black lawmakers rejected N.C. House and Senate maps, even though those maps would likely lead to the election of more black representatives and senators in 2012. Reps. Nelson Dollar, R-Wake, and Mickey Michaux, D-Durham, debated the reason for black Democrats’ opposition to the plan. That’s followed by a fundamental question about the public and private sectors in this country. Has the debate over the proper role of government versus free markets reached a crossroads? Peter Frank thinks so. The Jesse Helms Center Free Enterprise Fellow and director of Wingate University’s BB&T Program on the Moral Foundations of Free Enterprise discusses that crossroads and the impact of government intervention and market forces on our nation’s future. And finally, many will remember the recent legislative session for debate over the state budget and how to address a massive deficit, but JLF’s Director of Education Studies Terry Stoops says parents and supporters of school choice have progress to celebrate. He outlines key accomplishments, including the lifting of the charter school cap and a special-needs tax credit.