Year In Focus: The Standout Interviews Of 2012 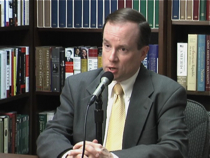 As we prepare for a new year, Carolina Journal Radio revisits some of the standout interviews of 2012. First, John Locke Foundation President John Hood discusses themes from his latest book, Our Best Foot Forward: An Investment Plan for North Carolina’s Economic Recovery. Highlights include tax reform, and investment in physical capital and human capital. Next, John Stossel once was a liberal television consumer affairs reporter, but he eventually evolved into one of America’s leading libertarian voices. The columnist, author, and host of Fox Business Network’s “Stossel” shared key tenets of his libertarian philosophy during a 2012 visit to Chapel Hill. Next are comments from a U.S. senator many consider a future presidential candidate. Sen. Marco Rubio of Florida has made his mark as a rising star in the conservative movement. He shared his thoughts about the American Dream, the 2012 election, ObamaCare, and the Tea Party during a trip to Raleigh. That’s followed by a fascinating look at the benefits of capitalism. Whether you like capitalism or consider it evil, you have to admit that large-scale industrial processes tied to capitalism have made our world dirtier. That’s true unless you have discussed the topic with George Mason University economist Donald Boudreaux, who explains how our world has been “cleaned by capitalism.” Next, John Locke Foundation Vice President for Research Roy Cordato explains why flexible policies related to growth and transportation are better than so-called “smart growth” policies, which actually restrict choices for citizens and property owners. Cordato explains why flex-growth policies respect individuals and “smart growth” policies transfer authority to government.