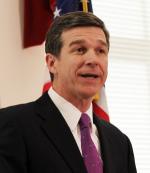 Cooper also called upon members of the General Assembly to conduct their business before the public, debating appropriations openly, where their decisions can be scrutinized.

“The people of North Carolina deserve open and honest government,” Cooper said at a press conference.

He proposed four changes to state law that he said would strengthen the Justice Department’s ability to uncover and punish corruption:

* Make lying to a State Bureau of Investigation agent a felony;

* Standardize financial disclosure requirements for all public officials, with tougher penalties for deception;

* Make all proposals for the state budget public, debated through appropriate committee processes and the full legislature.

Cooper told reporters that his proposal was not motivated by any specific current investigations. He said his office and the SBI had investigated more than 350 public corruption cases during his tenure, involving officials at the state and local level. In some cases, he said, witnesses have withheld information from SBI agents or lied to them.

Cooper said giving state Justice officials the powers of grand jury subpoenas and questioning under oath, in addition to making lying to agents a crime, would match federal law. Lying to federal agents is a felony.

He also called for consistency in the state’s financial disclosure documentation for all public officials, both elected and appointed, as well as for candidates for office. Members of boards and commissions and university administration officials should complete economic interest statements as well, he said.

“The system in place now includes a patchwork group of public officials,” Cooper said, “some of whom are covered by the Governor’s Executive Order and some who just voluntarily do it.”

He said there were “no real penalties” for providing false information on the disclosures.

“The public has a right to know if a government official or a candidate for office has economic interests which could be a conflict of interest,” Cooper said.

In one example, House Speaker Jim Black last year appointed Kevin Geddings to the newly formed N.C. Lottery Commission. But Geddings had to step down because he failed to disclose on an economic interest statement his previous business ties with Scientific Games, a potential lottery vendor. Under current law, Geddings is not likely to face any punishment beyond losing his position on the commission.

Cooper also criticized the practice in recent years at the Assembly, in which powerful lawmakers inserted items in the state budget outside of the committee and public debate process.

“Spending taxpayer money without deliberation and sunshine on the process plants seeds of doubt in the mind of the public about influence and power for those who know how to work the system,” Cooper said.

He said lawmakers should detail funds set aside as “reserves” with specific legislation, and should undergo scrutiny through the full legislative and budgetary process. He also said new state jobs should come from a recommendation by the governor or a state agency, also through the full appropriations process. Legislators who request specific projects in the state budget should be identified as well, Cooper said.

Black has come under criticism for creating a job in the Department of Cultural Resources for former Rep. Michael Decker, who switched parties in 2003 from Republican to Democrat to support Black as speaker. Black used reserve funds under his control to create the position. Former Cospeaker Richard Morgan, R-Moore, and State Senate President Pro Tem Marc Basnight, D-Dare, also maintained reserve funds after the 2003 budget process that helped pay for projects that their supporters wanted.

In response to a reporter’s question about North Carolina’s Northeast Partnership, which was established as a state agency and receives public funding but has declared itself a private nonprofit not subject to open-government laws, Cooper said his attorneys are composing an opinion on the agency’s status.

“I am absolutely concerned about the Northeast Partnership,” Cooper said. “The law should be enforced.”