Casinos, airports empty as Sin City worries it may be next target

I was in Las Vegas, an assistant city editor for the afternoon daily newspaper, the Las Vegas Sun.

I awoke that Tuesday morning to a clock radio, from which an announcer was talking about a plane flying into a building in New York City. He and another man were debating whether it was an accident.

Then a second airliner struck the towers. My father, on the East Coast and three hours ahead of me, called and asked whether I was watching “this.” I was not, and I don’t remember even turning on the TV. I got dressed and went to work. 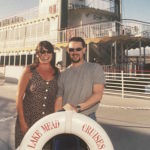 On my way in, at a red light at Lake Mead Drive and Boulder Highway, I was listening to National Public Radio when the South Tower collapsed. My wife Lisa — we weren’t married at the time — was a newswoman for the Las Vegas bureau of The Associated Press. She, along with the bureau’s other two reporters and photographer, was sent to take the weakening pulse of the city in the hopes of advancing the biggest story of our lives. Air travel stopped, and she was sent to McCarran International Airport to talk to workers and travelers who were angry, frustrated, scared. McCarran, like airports across the country, emptied quickly. But the incessant racket from the slot and poker machines droned on nevertheless.

When commercial air travel resumed, fewer people chose to fly, and fewer still chose to fly to Vegas. The Strip, once a West Coast Times Square where residents jostled for position on the sidewalks and tourists routinely stepped into traffic on Las Vegas Boulevard, became a quiet thoroughfare that more closely resembled a street in Lancaster, Pennsylvania, than the major artery pumping life into Sin City. A few strong-willed Americans wandered through the austere casinos, where craps and blackjack tables were eerily devoid of the once-ubiquitous crowds. The green and red felt of the tables, once busy with cards and dice, were now covered with green and black tarps, adorned with words promoting places such as the Excalibur, MGM Grand, and Caesar’s Palace.

At the Sun, a bewildered group of editors sat around a large table and espoused theories, rumors, and even some credible news. We mostly just stared at the table. Las Vegas, because of its many visitors and, well, how it was perceived in the minds of radical Islamic terrorists, was a target. We decided that much, anyway.

Before the meeting, we published the Sun each around noon, Monday through Friday. Beginning that day, and continuing for months, we would publish a second issue, later that afternoon. I never quite understood the reasoning for that — as we were just entering the age of instantaneous news — but I guess the editor was looking for a distraction. In retrospect, that was welcome.

Race and the consequence of ideas in the classroom