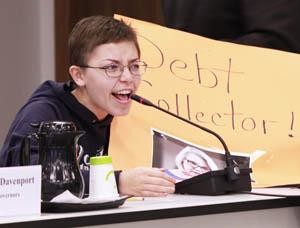 Protests turned violent during a Tuesday morning meeting of the UNC Board of Governors as students and faculty gathered once again to call for the removal of UNC president-elect Margaret Spellings, former secretary of education in the George W. Bush administration.

Four students were arrested after physically resisting police, and though at press time none has been identified publicly, all face charges for disrupting the meeting, according to Jeff McCracken, chief of the Campus Police at UNC-Chapel Hill.

The protests began in silence, but erupted into shouts and demands during the board’s discussion about program cuts at East Carolina University. Students swarmed the boardroom table, chanting and shouting before being removed forcibly by police.

Several students occupied the board members’ seats and used the microphones to shout and chant, “Stand up, fight back,” and “No justice, no peace.” One student took the gavel at the chairman’s seat and pounded it against the table in rhythm with the chants.

“See what you’re participating in?” One student yelled as officers escorted protestors from the room. “See what you’re allowing to happen to students? That’s some scary s–t. You’re letting a student be dragged out of here. What is wrong with you? You should all be scared. Look at what you’re doing to us!”

Law officers, who took several minutes to subdue the frenzy, say they acted well within the boundaries of the law as protestors showed unnecessary resistance.

“I think the behavior and the response of the officers here was completely dictated by the behavior of the protestors today,” said McCracken. “We hate that we had to take any action, but that was their choice.”

“We have approximately 40 officers [on duty],” McCracken added. “This whole situation’s not normal. We were expecting a protest but were hoping they would not be violent.”

The incident followed a protest at the board’s Dec. 11 meeting, during which at least four faculty members were removed for disrupting board proceedings during roll call. A discussion about disciplinary action followed, but no action was taken.

No faculty members participated in Tuesday’s disruption, but professors made their sentiments known in a quiet protest before the start of the meeting.

“This is about Margaret Spellings leading the system in the wrong direction,” said Zach Robinson, professor of mathematics at East Carolina University. “Spellings holds a record of attacks on diversity. She has openly attempted to suppress positive depiction of a same-sex household on public television. As secretary of education she neglected to apply for millions in funding for historically black colleges and universities. We think there is ample evidence that she is not somebody who is prepared to accept the challenges of leading a diverse faculty and student body to success.”

Robinson, who has helped the Faculty Forward Network — a New York City-based coalition of professors, students, and parents affiliated with the Service Employees International Union — conduct a survey of 1,400 UNC faculty members, says that many professors are deeply unhappy with the direction of the system, particularly with the lack of funding for new construction.

“Over the last 10 years or so we estimate that there’s been approximately 30 percent reduction in construction expenditures in the system,” Robinson said. “For a system that has a constitutional mandate to provide free education for the people of this state — as is practical — reduction in funding for construction is not only [taking us] in the wrong direction, it’s actually unconstitutional.”

Examining UNC’s construction expenditures in isolation of other factors is a mistake, however, as spending for the system as a whole has increased in the past 10 years, according to Jenna Robinson, president of the Pope Center for Higher Education Policy.

“The UNC system is very generously funded by the state of North Carolina, [with] the fourth highest per-student expenditures in the nation,” Jenna said. “Moreover, we should expect construction expenditures to be tied to usage and need. As data from the UNC system shows, facilities use is below the established targets for nearly every school — for both classroom and laboratory space.”

The Faculty Forward Network and NAACP college division have attempted to request meetings with members of the board to no avail, Zach Robinson said.

“The Faculty Forward Network stands ready to meet and confer with management and administration on this and a number of issues, and if they’re willing to do that, we would look forward to such a meeting,” he said.

“I don’t know that there has been such a [meeting] request made [by Faculty Forward],” said UNC spokeswoman Joni Worthington. “But obviously there are processes in place for faculty input to the board. There are processes in place for student input to the board. The Faculty Assembly includes members elected by the faculty. We have an Association of Student Governments that includes representatives from multiple campuses. Those are the kinds of avenues that students and faculty across the university can use.”