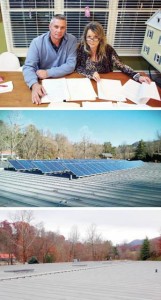 Yancey County resident Melissa Graham’s stimulus-funded project converting a former blue jean factory into a mixed-use commercial facility failed, and Graham did not pay tens of thousands of dollars to a subcontractor, but a report from the N.C. Department of Commerce viewed the project as a success, and Commerce says it “met its responsibilities in evaluating the satisfactory completion of all projects and the awarding of the associated grant.”

Graham, who is in her late 30s and lives in a remote area of Yancey County, received the $378,000 stimulus award in 2011 to pay for wall insulation, skylights, a solar water-heating system, and a solar electric generating system at the 60,000-square-foot building in Micaville. She never has owned the facility — which she renamed the Mountain Heritage Expo Center — nor has Carolina Journal been able to locate any formal lease she has signed to occupy the building.

Graham was unable to secure permanent tenants for the center, and had refused to pay $60,000 to one contractor who worked on the building. Sometime in 2013, the building’s owner put the facility up for sale. Graham then tried to get rid of the solar panels, initially posting them for sale on Craigslist before donating some of them to a nearby private school.

Emails obtained by CJ indicate that Commerce officials were aware that the project was failing, Graham had not paid for contracted jobs for which she had been reimbursed, and that she wanted to remove and dispose of the solar panels. Commerce has not made the official responsible for overseeing the project — John Hardin, executive director of the Office of Science, Technology, and Innovation — available for an interview.

A November 2012 Commerce report implied the MHEC project was a success, stating that it could “breathe new life into this dormant mountain community.” Green State Power, the solar energy company owned by Sen. Kay Hagan’s family that installed the two solar systems, also features the project on its website even though Graham removed the solar panels a year ago.

Melissa Graham has not responded to phone messages or messages left with a relative by CJ.

In a statement, Commerce Department spokesman Graham Wilson said, “While this grant occurred during the previous administration, the State Energy Office [in Commerce] met its responsibilities in evaluating the satisfactory completion of all projects and the awarding of the associated grant.” Wilson added, “When suspected wrongdoing is brought to the state’s attention, we will consider revisiting any project.”

The funds for the MHEC project originated with the federal government’s American Recovery and Reinvestment Act of 2009, commonly known as the stimulus. Federal stimulus funds generally flowed through state government agencies. The State Energy Office in Commerce handled some of the North Carolina funds and it designated another Commerce entity, the North Carolina Board of Science and Technology, to control some funds through its Green Business Fund.

Hardin, who heads the science board’s staff, has worked in the office since 2003 and was named director by then-Gov. Mike Easley in 2008. In a letter dated June 15, 2011, Hardin notified Graham that she had received a Green Business Fund award.

In 2012, the State Energy Office was moved to the Department of Environment and Natural Resources. CJ reviewed the MHEC file, now housed in DENR, including Hardin’s emails referencing the project.

The facility, called Taylor Togs, employed 125 workers making Levi’s blue jeans before closing in 2004. Hugh Dorris of Asheville and Bobby Atkins of Burnsville formed Micaville Loop LLC in July 2008 and planned to attract another garment operation. They bought the building in November 2010 but had failed to attract another tenant.

Atkins told CJ that Graham approached him about her vision for the building and he decided to give her a chance.

She submitted a grant proposal in March 2011 to Commerce to fund “Project Green at Mountain Heritage Expo Center.”

Graham’s plans were to transform the building into a mixed-use commercial building hosting a farmers market, restaurant, bank, and exposition space for conferences. She sought $378,000 to insulate the building, add skylights, install a solar hot water system, and install a solar power system hooked up to the electrical grid. She stated that her organization would contribute $50,000 towards the project. CJ could not determine if Graham actually provided any funding.

Graham stated that she would be the project manager. She also stated in the grant application, “There will be no employee from the Mountain Heritage Expo Center paid out of the grant funds.” But records show that she wrote herself six checks totaling $19,000 from grant funds.

Graham hired Synergy Building Concepts, a general contractor owned by Michael and Connie Downey, to build and insulate a stud-framed wall along the interior perimeter of the building. Synergy’s contract for the job was $97,029. Graham made only two payments to Synergy totaling $35,000.

Michael Downey met Graham in early February 2012, expecting to collect his final payment. Instead, he told CJ, “She told me that she needed $25,000 to pay for a van she just purchased and said she couldn’t pay me. She said she had already paid me enough.”

Records examined by CJ indicate that Graham was reimbursed by Commerce for work done by Synergy. In December 2011, Graham invoiced Commerce for work she said she had paid for. Included was an invoice from Synergy to Graham for $50,587.39 for Synergy’s work on the project. Graham included a copy of a check from MHEC for $50,587.39 made out to Synergy. Hardin approved the invoice for Commerce and Graham was paid.

CJ showed Michael and Connie Downey copies of the invoices they supposedly had sent Graham. They said they had not generated those invoices.

In the DENR file there were emails from Connie Downey to Graham discussing non-payment.

On Feb. 22, 2012, Michael Downey sent a package to Kamilah Riley, a compliance officer under Hardin in Commerce, including a cover letter and copies of email correspondence and invoices between Synergy and Graham. The letter was not included in materials Commerce and DENR provided CJ as part of a records request, but the Downeys provided a copy to CJ.

The Downeys hired an attorney to pursue the issue. They said his investigation revealed that Graham had no property or other assets in her name and that trying to collect from her would be futile. He also said they pursue payment from the building owner because he was not part of the grant process.

Based on the items in the file, Commerce took no action to deal with the Downeys’ complaint.

The original project budget included $80,647 for the solar electrical generating system and $70,609 for the solar hot water system. Green State Power, then known as Solardyne, installed both systems. CJ has been unable to determine how much the company was paid.

Solardyne/Green State Power was created in August 2010 and is owned and managed by Sen. Kay Hagan’s husband Charles “Chip” Hagan and their son Tilden. CJ has been unable to determine how the company was selected for this job.

Green State Power features a photo of the MHEC installation on its website: “Mountain Heritage Expo Center in Burnsville, N.C., provided an excellent site for an evenly balanced solar install: 76 pv panels on one side of the roof, and 20 thermal panels on the other side.”

A July 9, 2013, email from Hardin’s assistant Trudy Guffey to Graham shows that Tilden Hagan asked Commerce “about some equipment that was obtained through a Green Business Fund Award” to MHEC.

Graham responded to Guffey the following day stating that the owners are selling the building. “If we lose the building, what do we need to do? The panels and water system are removable, but the daylighting and insulating are not,” Graham wrote. “Your assistance is greatly appreciated!”

Later that day, Guffey wrote back to Graham, saying her office was discussing the project with the State Energy Office. “We will get back with you after the meeting to discuss the details,” she said. There is no further correspondence on the issue.

In November 2013, both solar systems were removed under Graham’s direction. A group of volunteers assembled by the Arthur Morgan School provided the labor. The school is a Yancey County private school serving grades seven, eight, and nine. In return, Graham gave the school 10 panels from the water heating system. CJ has been unable to determine the location of the remaining solar panels.