Commerce Official Tries To Divert Money To His Nonprofit 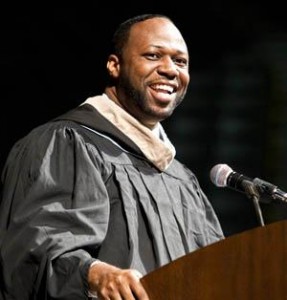 A senior official in the North Carolina Department of Commerce launched a scheme in November to direct more than $2 million in federal funds to a small Raleigh-based nonprofit organization that he chaired last year. The money would be a windfall for an organization that appears largely to have been dormant for the past two years.

Assistant Secretary for Community Development Henry C. McKoy failed to note his affiliation with the North Carolina Sustainability Center during 2010 on his initial statement of economic interest filed in February 2011, and in an update filed last month (PDF download). It is a Class 1 misdemeanor “to knowingly conceal or fail to disclose required information” on the form. McKoy was serving on the NCSC board as chairman at least through July 8, 2011 — nearly a year after he began his current position with Commerce.

Under McKoy’s plan, Buncombe, Edgecombe, Orange, and Yadkin counties would receive funds for a “Community Capacity Building Program.” Each county would receive $600,000 and could retain 10 percent for handling the grant. Each county then would be required to turn over the remaining $540,000 to NCSC for planning and research activities. NCSC would receive a total of $2.16 million. Records indicate McKoy began discussing the project in November and that he met in person with officials in at least three, if not all, of the counties to discuss it. Carolina Journal was unable to determine how he selected the four counties.

McKoy is a relative newcomer to public administration. Gov. Bev Perdue appointed him to the Commerce position in August 2010. He reports to Commerce Secretary Keith Crisco, and oversees approximately 90 employees and a budget of more than $100 million.

McKoy’s plan to funnel money through the four counties to NCSC was outlined in a Jan. 6 memo (PDF download) that he sent to Crisco seeking approval. The money was to come from surplus federal Community Development Block Grant funds from the years 2002, 2004 and 2007.

The memo stated that the “[e]ligible activities provided by NCSC [with the grant money] may include but will not be limited to the following:

CJ has been unable to determine if Crisco approved McKoy’s plan. Officials in three of the counties told CJ they haven’t heard any more about the funds since late January.

Late Monday, CJ informed Perdue spokesman Mark Johnson about McKoy’s activities. Johnson said he would look into it. One day later, Commerce spokesman Tim Crowley informed CJ that he had taken over the matter. Wednesday, Crowley told CJ he is still looking into the matter and would not be able to respond until Thursday afternoon.

McKoy did not return messages left Wednesday on his mobile phone and office phone. (See editor’s note at end..)

According to its website, “the North Carolina Sustainability Center catalyzes change and inspires residents, businesses, and communities to advance an economically vibrant, socially equitable, and environmentally prosperous future for North Carolina.”

There is no phone number listed on the website, and the center’s physical address is in fact a mailbox in a UPS store at a North Raleigh shopping center. Only two employees are listed. Katie Kross of Chapel Hill is the center’s president and Karen Sina of Raleigh is the center’s business manager, according to the website.

CJ left phone and email messages with Kross seeking a phone interview. In an email response, Kross initially declined a phone interview saying she was busy with her young children this week.

Reached by phone, Sina refused to answer questions about the center but said, “We are just getting off the ground. You will have to talk with the president.”

As part of the Sustainable Community Capacity Building Program, our Center has proposed to provide sustainability education, technology, and technical support services to the four counties in service of community development efforts.

The project is in discussion/proposal stages right now but is not funded yet or under contract. Specifics are still being explored.

Kross also noted that she joined the center as president in November 2011.

According to the website, the current NCSC board of directors is made up of 10 people, with Maria Kingery of Morrisville-based Southern Energy Management serving as the organization’s chairman. Kingery did not respond to email and phone messages trying to determine when McKoy left the board.

Public records show that the center started out in 1998 as an organization named Saving Our State. It was renamed Sustainable North Carolina in 2004.

An April 2010 report in Philanthropy Journal stated that Sustainable North Carolina “is suspending operations as it reevaluates its future.” McKoy declined to comment for that story.

On Aug. 2, 2010, the same day Perdue announced McKoy’s appointment to the Commerce position, McCoy filed a name change form with the N.C. Secretary of State’s Office, renaming the organization the North Carolina Sustainability Center. McKoy signed the form with the title “Chair, Board of Directors.”

Even though the center’s website features a blog that has been updated several times in recent weeks, NCSC’s latest Internal Revenue Service Form 990, Return of Organization Exempt From Income Tax, indicates the center is not very active (PDF download). It received $7,638 in grants and had $8,441 in expenses for the calendar year 2010. The form lists McKoy as the center’s chairman. It was dated July 8, 2011, and signed by McKoy as chairman.

McCoy, 39, originally from Fayetteville, obtained a business degree from the University of North Carolina at Chapel Hill in 1995, and he currently lives in Durham. He is pursuing a master’s degree in Environmental Management from Duke University.

He claims on a recent bio that he has served on more than 45 national, statewide, and community boards. He is a past board member of the SJF Institute, an organization founded in 1999 with offices in Durham, New York, and San Francisco. SJF describes itself as an “independent nonprofit institute that works with positive impact business and sustainable entrepreneurs to facilitate their access to capital, promote employee engagement, and help build sustainable economies.” President Obama’s former green jobs director Van Jones also served on the SJF board, according to the website.

McKoy is a 2003-2005 William C. Friday Fellow for Human Relations, and claims that he is “a sought after motivational speaker on topics ranging from energy finance to community development to adaptive change management.”

According to a May 2010 profile in The News & Observer of Raleigh, “McKoy has carved out a niche for himself as an expert on the green economy and ‘socially and environmentally responsible’ businesses. So much so, in fact, that last spring he was invited to the White House to discus green jobs and green investing.”

Before joining the Commerce Department, McKoy spent more than 15 years in banking, including time at Central Carolina Bank and SunTrust Bank.

In 2007, he formed Fourth-Sector Bancorp, an investment advisory firm focused on energy and sustainable industries. He changed the name to SIE Financial Group in 2007, and then to Fourth Sector Financial in 2009.

In March 2010, McKoy received a notice from the Secretary of State’s Office that Fourth Sector Financial would be dissolved administratively for failing to file any annual reports. On June 30, 2010, just a month before joining the Commerce Department, he filed annual reports for 2007, 2008, and 2009.

McKoy is not listed as a principal on Fourth Sector’s website, and, since the listed phone number is no longer in service, it appears the company has ceased operations.

Editor’s note: The initial version of this story reported that Henry McKoy was contacted Thursday. Instead, he was contacted Wednesday, April 4. We regret the error.