Three others implicated in separate plans to conceal unlawful donations 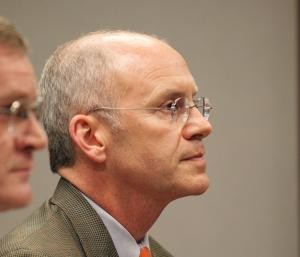 The felony conviction Wednesday of Greensboro businessman Peter Reichard, Gov. Bev Perdue’s former campaign finance director, confirmed the existence of a plot to funnel thousands of dollars to the 2008 campaign from a donor who had provided the maximum allowed by law. Additional indictments implicate Reichard, along with three other Perdue associates, in two other schemes to skirt campaign laws and bring more money than the law allows to Perdue’s election efforts.

Reichard entered an Alford plea, an arrangement that allows a defendant to maintain his innocence while acknowledging that the prosecutor has sufficient evidence to win a jury trial.

At the request of Wake County District Attorney Colon Willoughby, a grand jury indicted Reichard and three others for their roles in separate schemes to provide financial support for Perdue’s campaign organization without properly reporting the transactions.

Superior Court Judge Donald Stephens sentenced Reichard to two years probation and ordered that Reichard pay a $25,000 fine within 90 days. He also prohibited Reichard from working in any political campaigns during the probationary period.

Reichard’s scheme involved allowing Charles Michael Fulenwider, a Morganton fast-food franchisee, to contribute $32,000 to support the salary of campaign staff member Juleigh Sitton, an attorney from Morganton. Fulenwider had given the Perdue campaign the maximum $8,000 allowed during the primary and general election periods before providing the additional $32,000.

Willoughby said that Sitton received $3,000 per month in salary from the campaign from August 2007 through November 2008. Fulenwider provided an additional $2,000 a month over a 16-month period. The unreported contribution from Fulenwider was disguised as a consulting contract between Fulenwider and Tryon Capital Ventures LLC, a private company controlled by Reichard. Willoughby stated that Reichard, Sitton, and Fulenwider entered into phony consulting contracts in an attempt to cover their activities.

Sitton has been charged with causing the Perdue campaign committee to file false reports and obstruction of justice. She is expected to appear in court in January. Fulenwider has not been charged, but Willoughby has said that others may face charges during this investigation.

In a statement issued by his attorney, Hart Miles, Reichard said he did not want to undergo the time and expense of a trial. “I have spent most of my adult life working hard to serve my community and the state of North Carolina,” he said. “I acknowledge that I have made some mistakes along way and today pay the price.”

The statement also said “Mr. Reichard will not be granting any interviews.” (For a PDF download of the statement, click here.)

Caldwell’s indictment states that he solicited and accepted a check from James Fleming, a Morganton barber, in the amount of $3,048.50 to pay for a chartered aircraft for Perdue. Caldwell then reimbursed Fleming for the check with money that came from an unidentified third party — a violation of campaign law. Fulenwider, an acquaintance of Caldwell, originally was invoiced for the flight.

Caldwell is expected to appear in court in January.

The third scheme involves Perdue’s close friend Trawick “Buzzy” Stubbs, a New Bern attorney and the law partner of Perdue’s late former husband. Stubbs also is charged with causing the Perdue campaign committee to file false financial reports and obstruction of justice. Specifically, he is accused of providing $28,000 worth of flights in private aircraft for Perdue’s political activities and funding the flights through his law firm.

The Perdue campaign reported the flights and reimbursed Stubbs months after they took place. The reporting began after news stories appeared alleging former Gov. Mike Easley had not reported free campaign flights. In November 2010, Easley entered an Alford plea to a Class I felony for violating campaign finance laws.

A 2010 investigation by the State Board of Elections into Perdue’s use of private aircraft revealed that Reichard was aware of the unreported flights that were arranged and paid for by Stubbs.

Through their attorneys, Stubbs and Sitton have asked Willoughby to share his evidence. Willoughby said he has turned over more than 10,000 pages to their legal advisers.

Stubbs also is expected appear in court in January.