Newsletter publisher says both candidates have their weaknesses 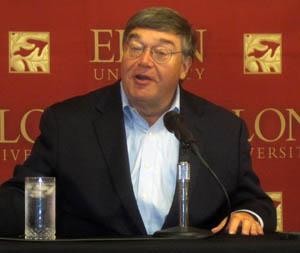 ELON – Nationally known political analyst Charlie Cook said at Elon University today that the North Carolina contest for U.S. Senate, in a year in which the political balance in the nation’s capital is at stake, could be the closest race in the country.

“I think this could easily be the closest in the country,” Cook said of the race between Democratic incumbent Sen. Kay Hagan and her GOP challenger, state House Speaker Thom Tillis. Libertarian Sean Haugh is also on the Nov. 4 general election ballot.

Cook, publisher of The Cook Political Report, spoke with reporters on the Elon campus before a public speaking engagement at the university later in the evening.

“I think Hagan is an extremely vulnerable incumbent, where she won under some kind of an interesting set of circumstances that [then-incumbent GOP] Sen. [Elizabeth] Dole had not been coming back to the state much and was extremely weak,” Cook said. He also noted that Hagan benefited in 2008 from Barack Obama’s “world-class organization.”

“Now she’s running without having President Obama at the top,” Cook said.

But Tillis also has his problems, he said.

“I don’t think the legislature did him any favors,” Cook said. “I think the tail end of the session clearly cost him a fair amount of support.” However, since the legislature has been out, Tillis has been able to regain some support, turning the contest into a “very, very close race,” he said.

“It’s going to be a close call on the U.S. Senate overall,” Cook said, noting that nationally there are seven seats currently held by Democrats that are “extremely close.”

Republicans need a net pickup of six Senate seats to win a majority.

As for the U.S. Senate debates, Cook said that both candidates will be trying to prevent self-inflicted wounds.

“There’s no need to swing for the fences,” Cook said. “If they make a mistake, it becomes extremely important.”

In response to a question, Cook said that future elections, such as 2016 and 2018, could see the U.S. Senate switching between the two major parties, with neither party holding a large majority.

Cook noted that the difference in turnout could be a factor in future elections, with the turnout being higher in presidential election years, such as 2016.

“You could very easily see Republicans pick up a majority in this election based on the Democratic exposure and turnout and then lose it in 2016 based on the exposure and the turnout that year,” Cook said. “Then, if you look at 2018, it actually flips back over.”