Tracing the ownership of the land hosting a Nash County solar farm built on a former cow pasture is complicated business.

[Editor’s note: The headline of this story was changed to reflect new information from Judge Pell Cooper. See correction below.]

On his Statement of Economic Interest covering 2014, then-Attorney General Roy Cooper, in November of that year, said he ended his ownership interest in Will Clark Properties LLC. The business entity, created in 2012, was leasing land to the solar farm.

But public records indicate Will Clark Properties continues to use a U.S. Postal Service mailbox at the Cameron Village station in Raleigh, which in some years also served as Cooper’s personal mailbox.

Cooper, elected governor in 2016, according to his economic interest filings left his brother Pell as the only known principal of Will Clark Properties. Pell, a District Court judge, lives in Rocky Mount. Carolina Journal has asked Governor Cooper to explain the continued listing of the Raleigh post office box as the official mailing address for Will Clark Properties. He has offered no answer.

The mystery surrounding the post office box is one of several oddities surrounding Nash County landholdings of the Cooper brothers. The same mailing address — P.O. Box 12181, Raleigh, NC 27605 — was listed in 2015 with the secretary of state’s office as the official address of York Investment Enterprises LLC, a company naming Pell Cooper as the only manager. Another is Will Clark, a Nash County resident who had grazed cattle on the property before the solar farm was built.

The solar farm is a 4.9-megawatt facility covering 40 acres. Public records don’t indicate that the person Will Clark was, or is, an owner of Will Clark Properties. CJ’s multiple attempts to talk with him were unsuccessful.

[Editor’s note: After this story was published, Pell Cooper told the Rocky Mount Telegram the company was named after Will Clark, the Cooper brothers’ great-grandfather. Though Pell Cooper failed to tell this to CJ at the time, we regret the error.]

While Roy Cooper says that after November 2014 he was no longer was an owner of Will Clark Properties, the corporate mailing address for the company remains the same one Roy Cooper has listed as his personal address. Pell Cooper has served as a District Court judge since 1999. 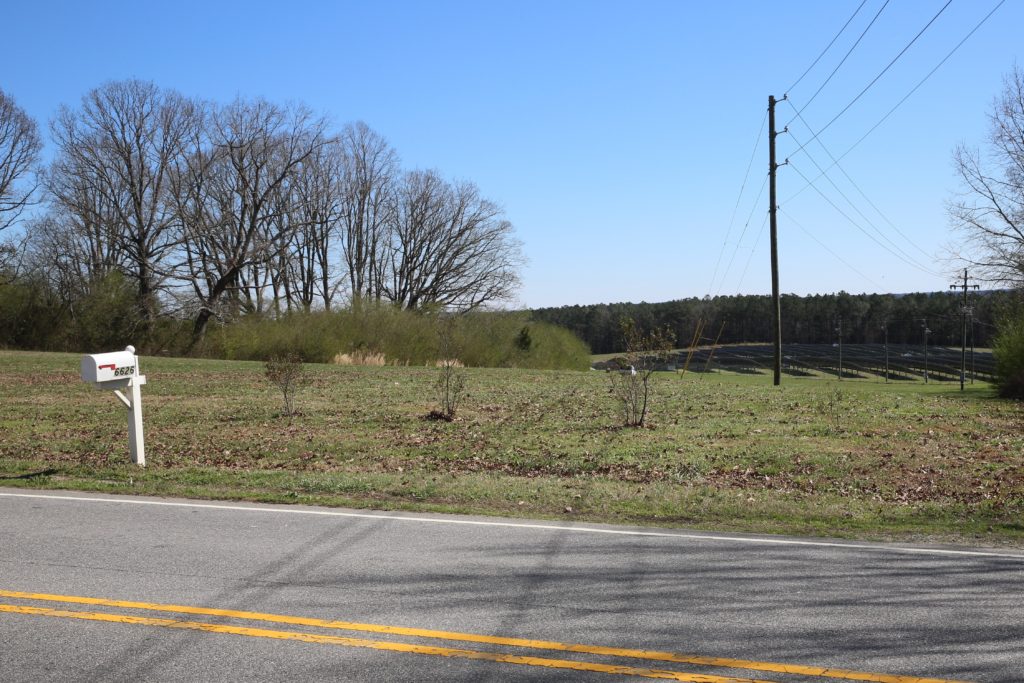 Patricia Coggin, who lives across the road from the Strata Solar farm on Cooper family property, says Strata hasn’t lived up to its promise to plant vegetation shielding the solar panels (in background) from her view. (CJ photo by Don Carrington)

Coggin also told CJ that Strata representatives told her the company would plant vegetation to screen the solar panels from the road. More than four years later, the company has installed a few bushes that provide no screening. “I am still hoping they are going to fix this situation,” she said.

P.O. Box 12181, at Cameron Village, is slightly less than a mile from Roy Cooper’s Raleigh home on Park Drive.

Every Will Clark Properties annual report filed with the N.C. Secretary of State lists the Cameron Village box as the principal mailing address for the company. On the same reports, Roy Cooper listed that post office box as his personal address as a manager of the company in 2014 and 2015.

Cooper’s office acknowledged he had been involved with Will Clark Properties, but it failed to answer several CJ questions involving the solar farm and how Cooper divested his interest in the property and income stream.

In December 2014, John Williford, an attorney who has set up other companies for the Cooper brothers, filed papers with the Secretary of State establishing York Investment Enterprises LLC. The annual report for the company filed in April 2015 lists Pell Cooper as the manager, but it also lists PO Box 12181, Raleigh, NC 27605 as the principal office mailing address. Reports filed in 2016 and 2017 list a Rocky Mount post office box as the mailing address.

The Statement of Economic Interest that senior government officials must file contains an affirmation page. On it, the official must affirm his statement is true and acknowledge he is subject to criminal penalties for concealing information or providing false information.

The document states: “I affirm that the information provided in this Statement of Economic Interest and any attachments hereto are true, complete, and accurate to the best of my knowledge. I also certify I have not transferred, and will not transfer, any asset, interest, or property for the purposes of concealing it from disclosure while retaining an equitable interest.”

Cooper checked “I agree,” and signed each annual statement covering the years 2012 through 2016. In January 2017, he took the oath of office as North Carolina’s 45th governor.