Debt service would rise, treasurer says, but tax hike may not be needed 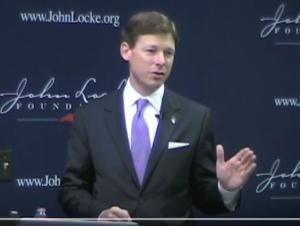 RALEIGH — While publicly lobbying for the $2 billion Connect NC bond referendum that will be on the March 15 ballot, Gov. Pat McCrory and members of his administration say the measure will be fiscally prudent, reducing state General Fund debt over the next five years.

But a small and growing chorus has criticized the bond proposal, which would support projects related to the UNC system, community colleges, state and local parks, water and sewer infrastructure, agriculture, and public safety.
“If you remember, we had a fit about $8 billion in debt under [former Gov.] Bev Perdue, and so we went on an austerity program, we paid down our debt,” said state Rep. Mark Brody, R-Union, who voted against the bonds.

“The issuance of the $2 billion Connect NC bonds will cause debt service to rise,” said Brad Young, press secretary for state Treasurer Janet Cowell. Debt service is the state’s payment to retire its debt.

“The exact amount of the increase annually will depend upon the issuance schedule and prevailing interest rates at the time the bonds are issued,” Young said.

“Interest rates are at historic lows,” outgoing state budget director Lee Roberts said during recent remarks at the John Locke Foundation. “We believe we would be committing fiscal management malpractice not to take advantage of these historically low interest rates to finance these long-term infrastructure needs.”

Roberts said the state is paying off its existing debt very rapidly. It was at $7 billion in 2010 before dropping to $5.2 billion at present.

“We’ll pay off 75 percent of our existing debt over the next 10 years, and even with the issuance of the additional $2 billion we’ll have less debt five years from now than we do this year, and that’s why we’re so confident in saying this bond in no way will require a tax increase,” Roberts said.

The state likely would issue the bond in four installments so all the debt would not come due at the same time, Roberts said.

If the state found itself in a rapidly rising rate environment “which we might have,” Roberts said, “you probably would front-load the issuance. That’s a decision for the treasurer and the debt writers at the time of issuance,” when interest rates would be locked in.

Even if the bond were issued at 5.75 percent interest, there would be “ample debt service capacity, ample affordability,” Roberts said.

The 2015 Debt Affordability Advisory Committee chaired by Cowell “found that the General Fund had in excess of $2 billion in additional debt capacity,” Young said. “Therefore, at the current time it does not appear that a tax increase would be necessary to service the new debt.”

The rating agencies currently consider North Carolina’s debt burden to be “low-to-moderate,” and “below average,” Young said, “and they recognize that state borrowing is subject to debt affordability guidelines,” so the state’s AAA rating should not be affected.

State bonds “historically enjoyed very favorable market acceptance, and a very positive reception from investors,” Young said. “At the current time it does not appear that extraordinary actions will be necessary to successfully issue the bonds.”

Brody said to call any of the potential bond uses pressing needs “is a real stretch of the imagination. If they were pressing needs then they would have been in the budget.”

Brody believes “we would get more economic value if we waited a few more election cycles, and took advantage of our surpluses to do certain things that we really need to do, and pay off our debt.”

The state would have more money available to spend on its needs without raising taxes if it didn’t add the new debt service and interest, he said.

“I’m a very strong, conservative Republican, and I would not embrace this,” Brody said. Asked if the bond package was out of sync with Republican values, he replied, “All I’m going to say is that this isn’t a strong Mark Brody philosophy to follow.”

“Although we are being told that this bond will not lead to tax increases, I never heard of a bond that didn’t,” said state Rep. Larry Pittman, R-Cabarrus, who voted against the bonds.

“Even if we don’t raise state taxes to pay for it, I believe the localities involved, in order to meet the matching funds aspect of some of this, will almost certainly have to increase their taxation to pay their share of it,” Pittman said.

“I personally would not go out and buy a house, car, or other item I don’t really need, just because interest rates are lower. The state needs to be similarly frugal with the people’s money,” he said.

The state should not put up new university and community college buildings “when they aren’t even using all the space they have now,” he said.