CSX to get $700k subsidy for every job created

The Carolina Connector, a $272 million Edgecombe County transit hub for CSX railroad, would receive taxpayer subsidies from the state of North Carolina of at least $700,000 for each of the 149 jobs the rail project is projected to create — for jobs that are expected to pay an average of $64,000 per year.

That’s one of several anomalies associated with the CSX project, which was announced July 19 by Gov. Pat McCrory and a host of other state leaders at North Carolina Wesleyan College, roughly one-quarter mile from the project. The Carolina Connector initially was slated for a location in Johnston County near Selma, but significant opposition from local landowners left state officials scrambling to find a new site.

Among the other unusual aspects of the Carolina Connector project are:

CSX will spend at least $150 million on the project, which will encompass approximately 500 acres east of and adjacent to the existing CSX tracks that run parallel to Highway 301 near the N.C. Wesleyan campus in Rocky Mount. CSX says construction will begin in 2018, with operations beginning in 2020. 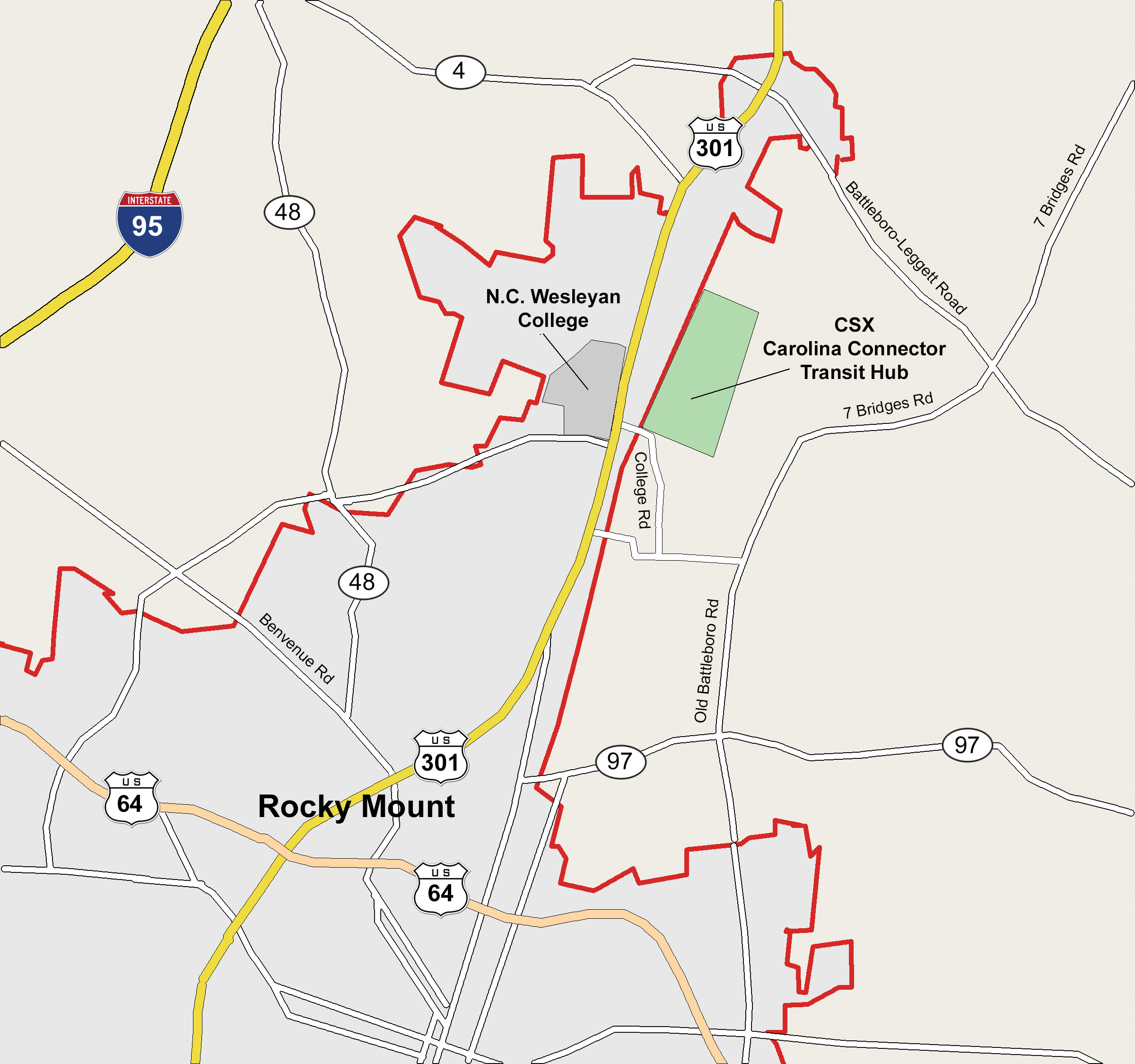 The primary purpose of the project is to have shipping containers spend more time on rail cars and less time on trucks. “Transporting goods by rail offers numerous benefits, including reduced truck traffic and wear and tear on highways, improved air quality and highway safety, and more environmentally friendly and cost-effective movement of freight. One intermodal train can carry the load of 280 trucks,” stated a press release from McCrory.

CSX says the benefits to the Rocky Mount area and the state of North Carolina will be substantial. The project “will create jobs, reduce transportation costs, and stimulate economic activity. With this new transportation hub, existing businesses and state ports will have greater access to global markets at lower logistical costs.”

Even so, the project involves significant taxpayer spending to benefit a company that operates in a competitive marketplace and is attempting to maximize profits. CSX competes with Norfolk Southern railway and trucking companies for cargo shipments. In 2015, CSX had net earnings of $2 billion from $11.8 billion in revenue.

CSX quietly approached NCDOT’s Rail Division in 2014 with a plan to build the rail hub on approximately 500 acres outside Selma, contingent on getting a taxpayer subsidy of at least $100 million. CSX presented the Rail Division with a study touting the benefits the project would bring to the state. Before moving forward with the project, the Rail Division commissioned its own study, “Project Scorpion: Evaluation of a Proposed Intermodal Terminal,” prepared by WSP/Parsons Brinckerhoff, an international engineering services firm with an office in Raleigh.

A draft study was completed in October 2015, and a revised report was completed in January 2016. NCDOT had kept the potential project quiet because there were no media reports until Jan. 16, when McCrory announced that CSX planned to build a major shipping hub in Johnston County and that it would likely receive $100 million in state funding through the state’s Strategic Transportation Investments law that helps fund new infrastructure. The project had the support of the Johnston County Commission.

Immediately after McCrory’s announcement, news reports revealed that CSX had not notified many of the affected landowners and some said they would refuse to sell their land to CSX. CSX said it was prepared to use its power of eminent domain that allows it to take land from property owners, with compensation set by the courts.

On Jan. 26, McCrory reversed his position, saying the Selma plan “does not appear to be a viable option.”

CSX continued to pursue the project and said it would consider other locations in North Carolina and other states. An alternative site near the Johnston County town of Four Oaks was pushed by Four Oaks Mayor Linwood Parker. That site also met significant local opposition.

Opponents told CJ that when they contacted the governor’s office to express their objections, they were told that the Department of Commerce was handling the project. Even so, NCDOT gave initial authorization to the subsidy in April, nearly three months after McCrory announced it.

After the Selma project fell apart, Norris Tolson, head of the Carolinas Gateway Partnership, decided to look for a site in his region. His organization, based in Rocky Mount, is lead economic development agency for Nash and Edgecombe Counties. Tolson was a former state secretary of the departments of Commerce, Transportation, and Revenue. He was also a state legislator and head of the North Carolina Biotechnology Center.

When Tolson found a site near N.C. Wesleyan, he cleared the idea with the college president. “If it was going to be a problem for the college, then we weren’t going to move forward,” he told the Rocky Mount Telegram in July. The newspaper reported that once Tolson’s organization acquired the necessary options, he approached CSX and made his sales pitch. Tolson told CJ those options soon will be transferred to CSX.

The existing CSX rail lines and future hub are located approximately 1,500 feet from the main entrance to the N.C. Wesleyan campus on U.S. 301. Attending the announcement to show their support for the project were Democratic Attorney General Roy Cooper, former Republican Lt. Gov. Jim Gardner and former Democratic Gov. Mike Easley, all Nash County natives. Former Democratic Gov. Jim Hunt of nearby Wilson also was there.