Currituck County fed up with solar

Large solar projects haven’t been a good deal for Currituck County residents, says Bobby Hanig, the county commission’s chairman. The developers “have consistently tried to go back on what has been agreed upon in open meetings, and brought on extra work for county staff to ensure they are doing what is asked of them,” he said. 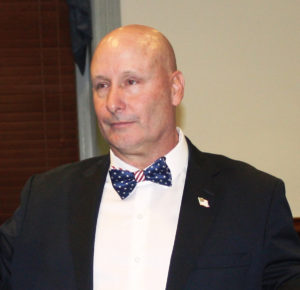 Currituck County Commission Chairman Bobby Hanig is one of the opponents of additional solar development in the county. (Photo provided by Currituck County)

Concerns about the recently completed 60-megawatt Summit Farms Solar energy facility, made possible by a contract with the Massachusetts Institute of Technology, was the final straw. In February, the county banned new solar projects. The 650-acre project, containing 255,000 individual solar panels, is five miles south of the Virginia border, two miles south of Moyock, North Carolina, and adjacent to three residential neighborhoods.

It is owned and managed by Richmond, Virginia-based Dominion Power. MIT and two other Massachusetts businesses signed a 25-year contract with Dominion to buy all the power, estimated to be 146,000 MWh per year, which will then be resold and added to the regional electrical grid. MIT’s investment in solar is part of the school’s effort to address climate change.

The resolution declaring a ban on new solar projects stated the commission wanted to prevent “incompatible solar array projects from being established that could adversely impact the quality of life for county residents,” and promote the “conservation of farmland.”

“We as a board felt the need to better protect the county in any future solar array projects by reviewing our current standards and getting input from our citizens as to where and how we approve future sites and what they will look like,” Hanig told Carolina Journal.

Like the nearby Amazon Wind Farm, Summit Farms Solar is not participating in the North Carolina Renewable Energy Certificate program, so the energy will not count toward the state’s goal to produce 12.5 percent of electricity by 2021 from renewable sources such as wind and solar.

Currituck County officials have dealt with three other large solar projects. Fresh Air Energy X, a Duke Energy subsidiary, owns a 20 MW solar facility in Shawboro Community. It started generating electricity in 2015. Across the road from an elementary school, there is no plant screening or earth berm blocking the view from the street.

Ecoplexus, a San Francisco-based solar developer, has been trying to build a 20 MW project named Sunshine Farms on a former golf course in the Grandy Community. Based on concerns from neighbors of the project, Currituck County denied Ecoplexus a permit. The company filed a lawsuit and, in March, a Superior Court judge sided with the county’s decision to turn down the project.

SunEnergy, based in Mooresville, wants to build an additional 60 MW facility on a site adjacent to Summit Farms. County Planning Director Ben Woody told CJ the project has already been approved by the county so it’s not subject to the recent ban.

County Commissioner Paul Beaumont told CJ that dealing with renewable energy facilities is a challenge for Currituck. “It is all new and there are a lot of lessons to be learned. They hit the region before we understood the ins and outs of solar and wind,” he said, referring to the Amazon Wind Farm west of Elizabeth City and 13 miles from Currituck County.

Beaumont said landfills might not be equipped to handle discarded solar panels. He believes converting the land back to agriculture is not practical because farm implements might run into buried conduit or wires that weren’t removed.

Beaumont and the other commissioners heard from residents living near Summit Farms Solar. Neighbors John Decker, Mary Harper, and Gail Romich live across the street. They are concerned about soil and groundwater contamination, as well as their property values. Since construction started, they have had to deal with dust clouds leaving dirt covering their homes and decks. Decker said they had little advance notice about the project. “We only had a few weeks to get ready for the first public meeting,” he said.

“It is a health hazard and it is ugly,” Romich told CJ. She questioned why it was built next to three residential neighborhoods. She is happy the commissioners put a moratorium on solar projects but wishes they had done so before Summit Farms was built. 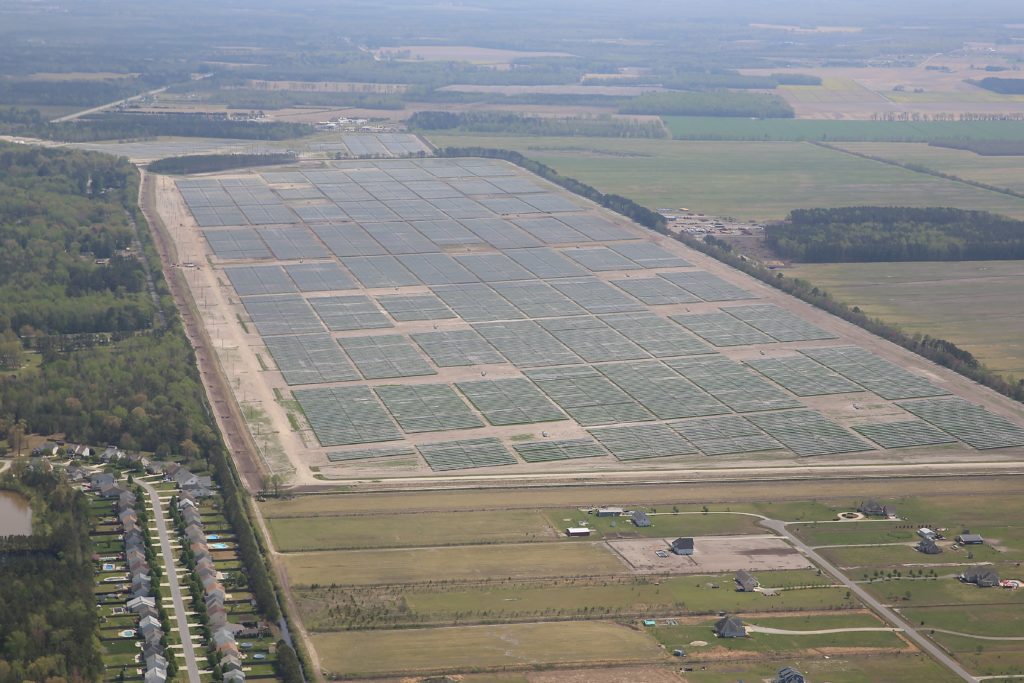 Even though the Summit Farms Solar project is in North Carolina, the electricity it generates doesn’t count toward the state’s renewable energy goals.

The North Carolina legislature in 2007 passed Senate Bill 3. It established a Renewable Energy Portfolio Standard requiring electric utilities to meet renewable energy purchase targets. Renewables, including wind and solar, must comprise 6 percent of the previous year’s retail sales in 2015, 10 percent in 2018, and 12.5 percent in 2021.

For the Summit Farms Solar to count toward a utility’s REPS requirement, the environmental attributes — or “greenness” — of the energy produced at the site would have to be bought by a North Carolina power company. The attributes are measured in Renewable Energy Certificates, or RECs. One MWh equals one REC. The actual power and the RECs can be sold to different parties.

Nor do counties collect the full amount of property taxes from commercial solar energy systems, as they do from other commercial or industrial users. In 2008, North Carolina enacted legislation exempting from local property taxes 80 percent of the appraised value of non-residential solar energy electric systems. Summit Farms Solar and similar projects are taxed at 20 percent of their actual value.

There’s no requirement that the facility participate in the North Carolina REC program to receive the tax reduction. Currituck County Tax Administrator Tracy Sample told CJ the preliminary assessed (taxable) value of Summit Farms is $30,079,090. That value is after depreciation, and the 80 percent exclusion in assessed value allowed under state law.

Remote-only learning has hurt students, particularly those with special needs