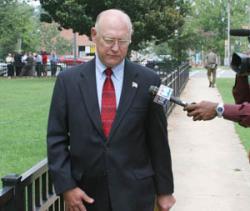 Former N.C. Rep. Michael Decker, Sr. of Forsyth County pleaded guilty Tuesday in federal court to crimes associated with efforts to elect Jim Black to another term as speaker of the House in 2003. Court documents tell of a deal made with an unnamed legislator that resulted in Decker receiving envelopes stuffed with checks and cash.

Hints as to the possible identity of the unnamed legislator came in comments by Decker’s lawyer outside the federal courthouse on Tuesday and in a recent news story in the Winston-Salem Journal. Attorney David B. Freedman acknowledged to reporters that the deal had been made in Salisbury, and the March 2006 news story described a 2002 meeting between Decker and Black at a Salisbury pancake house.

U.S. District Judge James C. Dever, III accepted Decker’s plea of guilty to one count of conspiracy to commit extortion, honest services mail fraud, and money laundering. Decker, 61, of Walkerton, could receive a maximum sentence of five years in prison and a fine of $250,000. His sentencing hearing is scheduled for Nov. 1. Decker avoided an indictment by a federal grand jury by entering into a plea agreement with the federal prosecutors.

According to court documents, after the results of the November 2002 general election left the House with 61 Republican members and 59 Democratic members, Decker, a Republican, solicited and agreed to accept $50,000 and other gifts in return for switching parties and supporting a particular candidate for speaker of the House.

In January 2003 Decker publicly announced he had changed his registration to Democrat. Later in 2003, Decker accepted an envelope containing about $38,000 in checks and $12,000 in cash in return for switching parties and supporting a particular candidate. While the candidate was not specifically mentioned in court documents, that candidate was Jim Black.

In court Assistant U. S. Attorney John Stuart Bruce said Decker made his deal with a Democrat legislator, but Bruce did not state the name of that legislator, nor did any of the court documents made available to reporters.

Decker declined to speak with reporters as he left the court building and proceeded to his car alone. Freedman did linger for a few moments to answer questions. He would not say with whom Decker met to set up the deal, but acknowledged Decker initiated the idea. He also acknowledged that the deal was put together at a meeting in Salisbury.

A March 26, 2006 Winston-Salem Journal story reported that in late 2002 Black drove from his hometown of Matthews to the IHOP restaurant in Salisbury and met with Decker to solicit Decker’s vote for speaker.

Through his lawyer, Black has maintained that he is not the target of a federal grand jury investigation. But while the Decker hearing was underway in federal court, a Wake County Superior court judge was hearing Black’s campaign appeal a State Board of Elections ruling against the campaign.

At that hearing a reporter asked Black’s lawyer, Kenneth Bell, whether the speaker was the target of a federal investigation. “You folks don’t seem satisfied with my answer. I have nothing new to say on that for months. I have no indication that his status with the grand jury has changed in all the many months you’ve been asking that question — right up to today,” Bell said.