Against freshman Republican Budd, Manning and Coker agree on much, but Coker bristles at Manning's strong ties to Democratic establishment 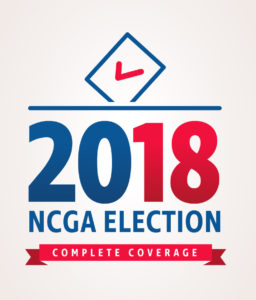 GREENSBORO —Two political newcomers are fighting it out in the 13th U.S. Congressional District Democratic primary in hopes of unseating freshman Republican Rep. Ted Budd in the November general election.

While Kathy Manning and Adam Coker are running on many of the same issues — expanded health care, a tax code that helps the middle class, immigration reform, and protecting Social Security and Medicare, the issue driving this campaign is money.

Manning’s Democratic critics claim she is the “ordained choice” of the national Democratic Party. A letter to the editor in the Greensboro News & Record stated as much. The writers said it was “unacceptable” and “undemocratic,” and the Democratic Congressional Campaign Committee had “gotten ahead of itself by anointing one candidate over another.”

Indeed, Manning is part of the DCCC’s “Red to Blue Program” that arms what it deems to be “top tier” candidates with organizational and fundraising support to help them run strong campaigns.

Manning’s campaign holds a significant fundraising advantage. Her campaign announced earlier this month that it was one of the “top-raising congressional challenger campaigns in the country,” with more than $1 million cash on hand.

While Manning’s campaign says it’s “already building the significant war-chest needed to defeat an incumbent who has used his time in Washington to protect deep-pocketed special interests,” she nonetheless has vowed not to accept any donations from Political Action Committees, asserting it would assure her independence from special interests.

That said, Manning’s campaign boasted in a press release that it had received the endorsement of Emily’s List, the PAC that has raised hundreds of millions of dollars for pro-choice, Democratic female candidates.

Manning, a Greensboro attorney and philanthropist, did not respond to requests for an interview. She went on the offensive against Budd early with an op-ed piece in the News & Record attacking his vote on the tax reform package passed late last year.

“We need tax reform that encourages job growth, but Budd’s bill gets the balance wrong, and adds $1.5 trillion to our deficit. Budd thinks that’s good for North Carolina,” Manning wrote.

According to Manning’s website, her views on health care evolved when her daughter was struck with a chronic illness. Manning “experienced firsthand the frustration of fighting with big insurance companies, outrageous drug prices, and the fear that a pre-existing condition could prevent her daughter from getting insurance in the future.”

Manning added that she “will work tirelessly to protect Social Security and Medicare for our seniors.” She said she “understands that we need to fix the broken parts of our health care system so that every American can get the care they need, including prescription medication at reasonable prices.”

Attempts to arrange an interview with Coker were not successful. He is a farmer and a truck driver who describes himself on his Twitter account as “a voice for the people, not for big money.”

In the wake of the high school mass shooting in Parkland, Florida, guns are a major issue on the campaign trail. Budd is a staunch Second Amendment advocate. He owns a gun store and a shooting range.

Coker describes himself as a strong advocate for the Second Amendment. But he released a statement criticizing Budd following the Parkland shootings, saying Budd “is not only bought by the gun lobby, he is the gun lobby.”

At a recent Town Hall for Our Lives event in Greensboro, Coker said he would never accept contributions from the National Rifle Association and that the gun rights organization puts “unbelievable” pressure on legislators to toe the line.

According to his website, Coker said the reason he is running is he’s “seen failed leaders who have ignored our most vital needs: Jobs, wages, education, and foreign policies that benefit Americans, and secure our future as a nation.”

Coker is a proponent of Medicaid expansion and immigration reform. On his Twitter account, he documents his meeting with Juana Ortega. She is a Guatemalan immigrant who has taken sanctuary in a local church after receiving a deportation order from the U.S Department of Immigration and Customs Enforcement.

Coker defended Ortega. “[T]his needs to stop,” he wrote. “We need real immigration reform in this country that gives people like Juana, dreamers and TPS [Temporary Protected Status] recipients, protection from deportation, and a path to citizenship.”

The district is rated “leans Republican” in the most recent “Sabato’s Crystal Ball” from the University of Virginia Center for Politics.