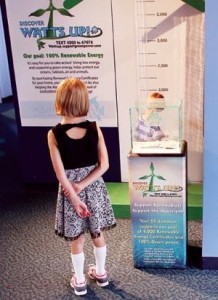 The North Carolina Department of Environment and Natural Resources has ended a misleading advocacy campaign at the state’s aquariums. The campaign asked visitors to help each aquarium facility “go green” by making a financial contribution that would allow each facility eventually to shift to electricity generated solely from wind power.

The campaign informed visitors that fossil fuels are responsible for global warming and encouraged them to help expand the use of power from “renewable” sources by purchasing “renewable energy certificates,” which have been pitched as a way to offset electricity generation from fossil fuels.

But the money collected through the project went to Greenlight Energy Group, a Troy, N.Y.-based broker that purchased the RECs from renewable energy suppliers nationwide.

Aquarium visitors who made financial contributions to the programs purchased nothing more than “certificates” representing wind power that had been generated in some other location and would not reduce the traditional energy the aquariums paid for in their utility bills. Though the program ended Labor Day, in mid-September the broker still was accepting payments from visitors who sent a text message to the program’s site.

DENR officials told Carolina Journal the campaign was scheduled to end after Labor Day, but they also acknowledged the program’s “messaging” was misleading and that it failed to generate significant financial support from the public. The campaign was funded by a $16,000 grant from The Ocean Project, a Rhode Island-based nonprofit organization.

“It wasn’t our money, so there was not a thorough review effort,” said DENR Deputy Secretary Don van der Vaart. “I think this project was at odds with the mission for the aquariums. I don’t think it was well thought through.”
DENR Secretary John Skvarla and van der Vaart said they were unaware of the advocacy program until they saw a column at Carolina Journal Online by John Locke Foundation Vice President Roy Cordato, who raised questions about the campaign after a visit to the North Carolina Aquarium at Fort Fisher.

The stated mission of the aquariums is “to inspire appreciation and conservation of N.C.’s aquatic environments.” But the message at the aquarium displays addressed much more than that. One display asserted that fossil fuels are bad and wind energy is good, and told visitors that “we” need your help. Another said, “Be the change together. Thankfully we can make a difference today. If we work together to lower our carbon footprint, we can help our planet and our oceans. By supporting renewable energy, such as wind we can decrease the use of fossil fuels.”

Different approaches were used at each site. Program administrators were allowed to determine the best ways to sell the “go green” message.

Aquarium Division Director David Griffin was the highest-level DENR employee to approve the $16,000 “Innovative Solutions Grant” from The Ocean Project, which, according to its website, “advances ocean conservation in partnership with zoos, aquariums, and museums around the world.”

The Ocean Project views these facilities as “the leading gatekeepers in providing the public with experiences that engage them, inspire them to take action at home and in their communities, and increase their understanding of science and conservation.”

Funding for The Ocean Project comes primarily from The Ocean Foundation, a Washington, D.C.-based nonprofit. The grant to North Carolina was funded partially by federal taxpayers through the National Oceanic and Atmospheric Administration, an agency of the U.S. Department of Commerce.

The North Carolina grant application stated that the four aquarium sites “will develop, deliver, and evaluate new and effective conservation messages that will encourage our visitors to take immediate conservation action by purchasing renewable energy credits for their homes.” REC broker Greenlight then would match those purchases with an REC donation in the name of the particular facility that enticed the visitor to make a donation.

The application stated that climate change and ocean acidification were the primary ocean problems that the project would help address.

“Our goal at all four sites is to be trusted resources in our communities for inquiries on climate change, to increase awareness and knowledge of current climate issues, and to engage visitors in direct actions,” stated the application. “This project will also advance on-site conservation efforts at each facility by allowing us to acquire ‘green power’ at our sites.”

“Our goal is to use 100% wind power at the Aquarium — that’s 3,037,000 kilowatt-hours a year,” stated a display at the Fort Fisher Aquarium. That display used the facility’s albino alligator Luna as a mascot for the campaign. “Help Luna go green — together we can reach our 100% wind power goal,” stated the display.

The program offered visitors the opportunity to buy renewable energy certificates for their homes through Greenlight, which says it “helps organizations navigate environmental markets and develop a deeper understanding of sustainability.”

Greenlight then would donate a matching amount of certificates in the name of the aquarium associated with the donation. Through the REC system, the aquarium and its supporters essentially can claim an emotional attachment to electricity that already has been produced from a wind farm in another state. Greenlight retires RECs when they are transferred to an end user such as the aquarium visitor and the individual aquariums.

The Fort Fisher Aquarium’s electric bill for the past fiscal year was $204,109, and the REC program would have no effect on that amount or its current electricity bill.

According to the U.S. Environmental Protection Agency, RECs “represent the property rights to the environmental, social, and other nonpower qualities of renewable electricity generation. A REC, and its associated attributes and benefits, can be sold separately from the underlying physical electricity associated with a renewable-based generation source.”

The campaign’s duration under the grant was from Memorial Day through Labor Day, but the displays and solicitations were still in place Sept. 6 at Fort Fisher, Pine Knoll Shores, and Jennette’s Pier. There was no display at the Roanoke Island Aquarium that day. The remaining displays were removed later in September.

At Fort Fisher and Pine Knoll Shores aquariums, interested visitors were asked to send a text message to a specific number. The visitor then would use a credit card to make a contribution after seeing this message:

The North Carolina Aquarium at Fort Fisher thinks you’re a spark plug for good. Thanks for igniting something amazing.

Choose any support level (minimum $5.00) that meets your budget. All come with our no-hassle cancel anytime policy. This purchase of Green-e Energy certified 100% U. S. wind RECs priced at 1.5 cents per KWh is in addition to and separate from your regular electric bills.

The program accepted two credit card purchases for RECs in mid-September by CJ, even though the program officially had ended on Labor Day. A receipt and thank you by email from Greenlight Energy followed each purchase. “Thank you for making a difference for ocean health and supporting the North Carolina Aquarium at Fort Fisher. Your actions matter,” read the note.

According to a report supplied to CJ by DENR, the program generated just $2,459.54 in donations from visitors at the facilities.