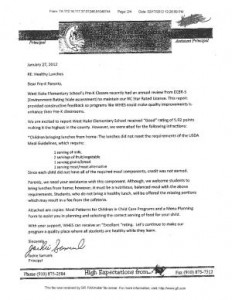 Even though government officials admit mistakes were made in the way a Hoke County preschool program handled lunches students brought from home, they continue to enforce the regulations that caused a nationwide uproar.

A story initially broken by Carolina Journal Feb. 14 lit up talk radio, the blogosphere and cable news shows. It led two members of North Carolina’s congressional delegation to demand explanation from federal regulators. A state legislator may convene a hearing in the General Assembly on the nutrition policies.

And, according to the mother of the 4-year-old who first objected to the school’s inspection of her homemade lunch, the school continues to give her daughter milk every day, against her wishes.

The NC Pre-Kindergarten program at West Hoke Elementary School was cited Jan. 26 for an “infraction” of the NC Star Rated License System, the grading program for preschools in the state.

Department of Health and Human Services regulations on Pre-K nutrition issued in August 2011 say: “Sites must provide breakfast and/or snacks and lunch meeting USDA requirements during the regular school day. The partial/full cost of meals may be charged when families do not qualify for free/reduced price meals. When children bring their own food for meals and snacks to the center, if the food does not meet the specified nutritional requirements, the center must provide additional food necessary to meet those requirements.”

Similar guidelines were spelled out one year earlier in the North Carolina Administrative Code, the state’s book of regulations. The regulations remain in effect.

The violation, according to a Jan. 27 letter sent by principal Jackie Samuels to parents of preschoolers, is that lunches children had brought from home “did not meet the requirements of the [U.S. Department of Agriculture] Meal Guidelines, which include: 1 serving of milk, 2 servings of fruit/vegetable, 1 serving grains/bread, 1 serving meat/meat alternative.”

The Division of Child Development and Early Education at the N.C. Division of Health and Human Services supervises the NC Pre-K program. If a parent sends a child to school with a lunch that lacks any of the listed items, “The rules require that the provider supplement a lunch with any missing components. How a provider chooses to do that is up to them,” DHHS spokeswoman Lori Walston wrote in an email.

The letter from Samuels warned of that possibility.

“Parents, we need your assistance with this component,” the letter continued. “Although, we welcome students to bring lunches from home; however, it must be a nutritious, balanced meal with the above requirements. Students, who do not bring a healthy lunch, will be offered the missing portions which may result in a fee from the cafeteria.”

The Jan. 26 infraction was noted by Cecelia Ellerbe, a child care consultant who works for the DHHS division. Walston told CJ Ellerbe “observed the lunch routine” at the preschool, which “would typically include walking through the cafeteria area. She could have seen any items that had been placed on tables, but might not have seen all lunches,” Walston said.

The following Monday, Jan. 30, the incident reported by CJ occurred. A teacher offered a 4-year-old girl a cafeteria tray with chicken nuggets, a sweet potato, bread, and milk to replace the turkey and cheese sandwich, potato chips, banana, and apple juice her mother had packed for her.

When the girl got off the school bus with her untouched lunch box that day, her mother wanted to know what happened. “She came home with her whole sandwich I had packed, because she chose to eat the nuggets on the lunch tray, because they put it in front of her,” her mother said. “You’re telling a 4-year-old, ‘Oh, your lunch isn’t right,’ and she’s thinking there’s something wrong with her food.”

The mother, who wishes to remain anonymous, contacted state Rep. G.L. Pridgen, R-Robeson. He has been in talks with DHHS and is considering holding a legislative hearing to determine whether the agency has the authority to enforce the nutrition standards.

CJ learned about the incident from Pridgen’s office. And since the initial story ran Feb. 14, a number of other media outlets have reported on various aspects of it.

A second mother – Diane Zambrano – with a child in the Pre-K classroom at West Hoke Elementary has come forward to Glenn Beck’s website The Blaze, saying her daughter’s salami and cheese sandwich and apple juice were replaced with chicken nuggets as well.

When Zambrano complained to the teacher, as the first mother had, she was told “an official had come through that day to inspect students’ lunches and that those who were lacking certain food groups were sent to the cafeteria,” according to The Blaze.

Zambrano’s daughter Jazlyn “was told to put her homemade lunch back in her lunchbox and set it on the floor,” the article says.

Pridgen told television station WTVD he had learned a number of lunches were rejected on Jan. 30, and that perhaps every student who brought a lunch from home was given cafeteria food.

In a segment aired Feb. 21, school officials told WTVD that three children were sent through the cafeteria line, and that doing so was a “staff error.”

Since then, according to Pridgen’s office, the school has given the anonymous 4-year-old girl vegetable soup on at least one occasion, although the mother has requested repeatedly that the school stop giving her daughter any food other than what’s in her lunch box.

CJ also has learned that the school gives the preschooler milk every day against her mother’s wishes. School officials say the cheese on her daughter’s sandwiches do not satisfy the USDA’s dairy requirement.

It is unclear if parents will be billed for the items the school says are missing from students’ homemade lunches. School officials told parents initially they could be charged $1.25 a day for the items.

WTVD also reported that school officials said the “staff has received additional training about nutrition regulations and procedures. They also say appropriate personnel action has been taken, but they did not elaborate.”

CJ has left voicemail messages seeking clarification with principal Samuels and the school district’s superintendent, Freddie Williamson. At press time, those messages had not been returned.

Jan. 26 DHHS consultant Cecelia Ellerbe “observed the lunch routine” at West Hoke and finds that at least one lunch brought from home lacked items required by USDA guidelines. A teacher “direct[ed] the child to get a tray from the lunch line.”

Jan. 27 West Hoke principal Jackie Samuels sends letter home with students, instructing parents to pack lunches with all items on the USDA list and warning them they may be billed.

Jan. 30 Teacher discovers at least two 4-year-olds brought lunches from home that did not have all the required items; DHHS officials say the only missing item was milk, but the teacher gave the children cafeteria trays with chicken nuggets, a sweet potato, bread, and milk. One of the 4-year-olds ate only the nuggets. Both brought the lunches they packed home uneaten.

Early February The mother of one 4-year-old contacts state Rep. G.L. Pridgen, who starts asking questions about the incident.

Feb. 14 CJ publishes initial story; other media outlets follow up. Pridgen says as many as 20 student homemade lunches were flagged.

Feb. 16 A USDA press release says the incident involved “a state-run nutrition program, and USDA had no involvement.”

Feb. 21 In a news report on Raleigh television station WTVD, an unidentified school official says three students were sent through the cafeteria line in error, and that the staff had undergone additional training.