The struggle over Vidant Health, the regional hospital network affiliated with the Brody School of Medicine at East Carolina University, escalated Thursday. In a radio interview, University of North Carolina Board of Governors Chairman Harry Smith said there are no plans “in any shape or form for UNC to take over Vidant Health.”

But an official, confidential report, which Carolina Journal received from sources last week, contradicts that statement. Stamped “draft and confidential,” the 12-page proposal — produced for UNC by the Cain Brothers, a health care investment bank — is dated Nov. 1, 2018.

Roper, a health care giant with a long history in the industry, stepped into the lead role at the UNC System offices after former President Margaret Spellings resigned in October 2018. Spellings left the board after three years of political turmoil, and Roper promised to calm things down.

It took just one week for the BOG to settle on Roper as the pick to lead the university system. There is no official process for selecting interim UNC presidents. At the time, Smith said he couldn’t think of anyone more qualified for the job than Roper, who formerly served as the director of the Centers for Disease Control and Prevention, and as a senior White House staffer.

The Cain Brothers’ study took several months to produce. It clearly shows plans for mergers and acquisitions to absorb small-to-mid-sized systems like Vidant Health and ECU Physicians, and lists one “UNC Health Care Executive” among the 17 people it interviewed during production of the report.

Vidant responded with a public statement the following morning.

“Vidant Health is not surprised by recent reports confirming the University of North Carolina System has been actively working behind the scenes to take over Vidant and ECU Physicians,” Vidant said in a press release. “It is part of a coordinated effort by outside interests and Raleigh politicians to “take dominant position in governance, deal terms, etc.” in eastern North Carolina. Despite this and many false narratives, the affiliation agreement with the Brody School of Medicine has always been and continues to be in effect. In fact, Vidant continues to support the education of medical students, residents and other health care providers, including Pirate nurses. The significant financial support from Vidant to Brody continues.”

CJ received the document several days ago. CJ reached out to UNC, asking if Roper was the executive Cain Brothers interviewed, but received no immediate comment. 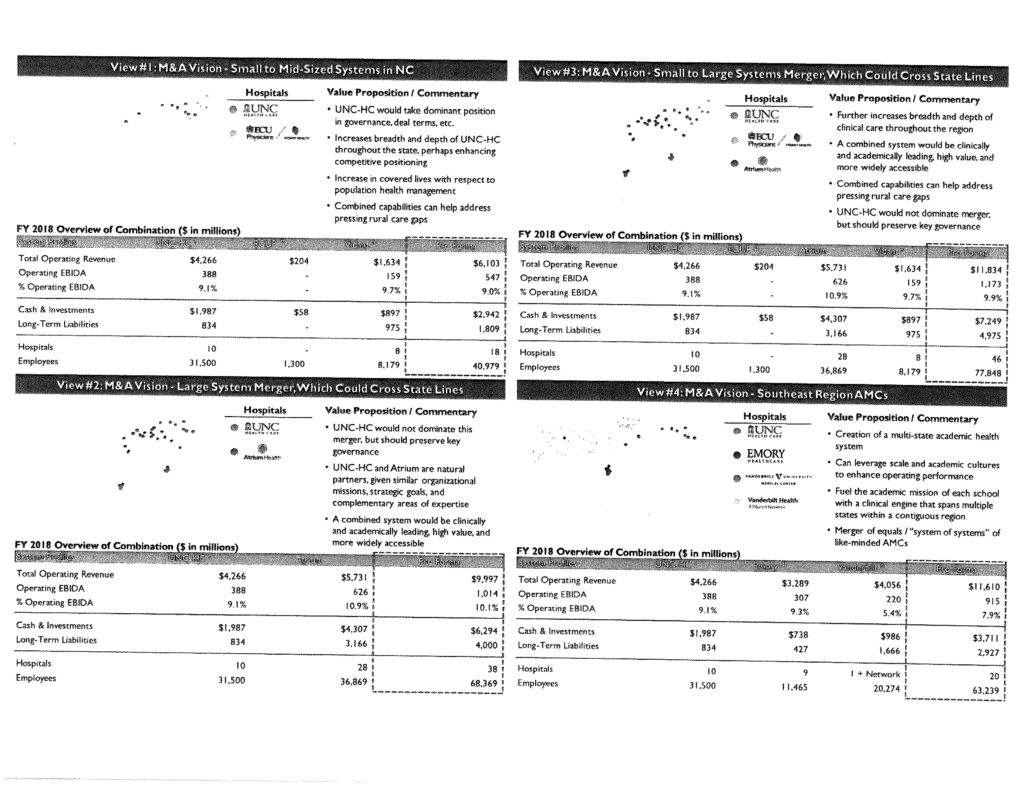 “An individual should be responsible for coordinating expanded health science training between campuses and the health system, so that issues can be dealt with at a lower level than the system presidency,” the report states.

State Treasurer Dale Folwell is imposing a new reimbursement model for the State Health Plan. It makes provider payments uniform, based on the Medicaid schedule. The plan would cut payments to hospitals, saving taxpayers and state workers money.

Certificate-of-need laws give state officials the power to deny new medical facilities and purchases of expensive equipment. Hospitals long have fought CON reforms, saying they can’t continue providing charity care if they face competition. Reformers say the laws protect hospitals’ profit margins and force residents in low-income and rural areas to travel to cities and suburbs to get advance imaging and other capital-intensive care.

Blocking Medicaid expansion and reforming or repealing CON laws are two top priorities of Republican leaders in the N.C. Senate.

The document packet includes an agenda for a Jan. 29, 2019, BOG health-care committee meeting. Item two is is titled “ECU/Brody School of Medicine Strategy.”

Drama surrounds the Brody School and Vidant Medical Center, which operates as the institution’s teaching hospital. Vidant Health owns and operates VMC, and in April overhauled its affiliation agreement with UNC, stripping the UNC BOG of all appointment power to VMC’s board.

Smith, an ECU alumnus, recently has had a rocky relationship with campus leaders and Vidant Health.

Emails show the Greenville businessman was at odds with former ECU Chancellor Cecil Staton, who came under scrutiny from Smith. Staton resigned in March, stating “there are some storms you cannot weather.” Staton noted that the decision to leave ECU wasn’t voluntary. Notably, Vidant CEO Michael Waldrum was one of 128 Greenville leaders who signed a public letter of support for Staton in January, months after reliable sources told CJ that Staton was being forced from his position.

System lawyers later took Vidant to court. The case now is in mediation.

On Thursday, Vidant Health CEO Mike Waldrum stated in a radio interview that UNC had plans to completely take over Vidant Health and Vidant Medical Center.

“There are no plans in any shape or form for UNC Health to take over Vidant,” Smith told WITN. “It’s my opinion that UNC Health Care taking over Vidant is 100% fear mongering.”

“What we’re trying to do is protect the Brody School of Medicine and investment of state tax dollars.”

Hours later, WITN dropped a report of the confidential documents showing UNC has indeed considered a takeover of Vidant.

Read a photocopy of the report here.