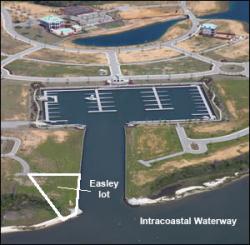 Federal authorities and state media have turned their attention to a Carteret County real estate development in which former Gov. Mike Easley bought a lot in 2005.

Carolina Journal first reported in 2006 on Easley’s purchase of a lot in the Cannonsgate development. An analysis of other transactions showed Easley got what The Charlotte Observer called a “sweetheart deal.”

The federal interest in the Cannonsgate development came after The News & Observer of Raleigh reported that investigators are looking into the free cars that auto dealers have provided to Easley’s family.

Federal investigators appear to be looking into the December 2005 Carteret County real estate transaction in which Easley obtained a choice waterfront lot at a lesser price than what similar lots sold for in the Cannonsgate development.

A spokesperson for Cannonsgate developer William G. Allen acknowledged an inquiry from federal authorities involving a specific lot purchase at the development. Easley appointed Allen and three others involved in the project to major state boards. All have been major political contributors to Easley.

CJ first reported in 2006 that Easley purchased a .36-acre waterfront lot in the Cannonsgate development for $549,880, a price that appeared low when compared to the other lots in the 525-lot development. Records indicate that he paid 10 percent down and financed the remainder through a $494,000 mortgage loan from Branch Banking & Trust.

Following that story, The Charlotte Observer published a similar story that concluded Easley got a favorable deal. Easley spokeswoman Cari Boyce told the paper that Easley did not receive special treatment. ”The governor paid the listed asking price for the lot. The price was set and non-negotiable,” she said at the time. She also said he bought the land as an investment.

One year after Easley’s purchase, the Carteret County Tax office assigned a value of $1,198,245 to the lot that borders the Intracoastal Waterway and the entrance to a new marina. Easley’s lot is the second-most valuable lot in the development. The development’s roads and other infrastructure are complete, but only one house is currently under construction in the development.

CJ was unable to talk with Easley about Cannonsgate. He recently joined the McGuire Woods law firm and works out of the firm’s Raleigh office. Messages left on his office voicemail were not returned.

Carteret County Assistant Tax Administrator Ralph Foster told CJ that he stands behind the $1,198,245 value placed on Easley’s lot. “Our job is to come up with a fair market value.”

He said for mass appraisals such as the periodic county revaluations tax administrators use standard practices developed by The International Association of Assessing Officers. North Carolina counties are required to do revaluations at least every eight years, but may choose to do them more frequently.

The purpose of the revaluations is to update the property values that may have changed at varying rates since the previous revaluation. The individual county commissions set the tax rates. Carteret County property taxes make up 44 percent of the county’s total revenue.

Cannonsgate has 525 lots and 75 individually owned boat slips. Thirty-four individual lot owners appealed their Jan. 1, 2007, value as set by Carteret County. Four of those values were adjusted downward. Easley did not appeal the value assigned to his lot.

Daniel L. Nicholson, the current president of the Carteret County Association of Realtors, told CJ that county real estate values probably peaked at the end of 2005.

“Excluding condominiums and townhomes, single-family residential properties are now selling for approximately 15 percent less than they did at the end of 2005,” he said. Nicholson said he knew little about Cannonsgate. Several Carteret County realtors who were familiar with the project did not want to speak on record.

Easley bought the lot from Cannonsgate developer R. A. North Development Inc. of Matthews. Randoph M. Allen is listed as the company president, according to the North Carolina Secretary of State office’s corporation records.

In June 2005 Easley appointed Randolph Allen to a six-year term on the N.C. Wildlife Resources Commission. Easley had previously appointed William Allen to the same commission.
During a break at a December 2006 meeting of the WRC in Raleigh, Randoph Allen briefly discussed the project with CJ.

Even though Allen’s signature appears on Easley’s deed, Allen said he had nothing to do with setting the price for Easley’s lot. He said the marketing company set the price, but Allen later acknowledged that his brother, William G. Allen, controlled the marketing company, Southeastern Waterfront Properties. Last year, the lead broker for Southeastern, Mace Watts, refused to discuss the details of Easley’s purchase.

Real estate investor Lanny Wilson of Wilmington, through his company Cannonsgate Investments LLC, provided $12.5 million in private financing for the Cannonsgate project. Easley appointed Wilson to the Real Estate Commission and to the N.C. Board of Transportation.

Real estate broker D. McQueen Campbell of Raleigh has taken responsibility for introducing Easley to the investment opportunity. He told CJ that he was a buyer’s agent for Easley. However, about the time of Easley’s purchase, Campbell developed a contractual employment relationship with the Allens.

Based on a recent filing with the State Ethics Commission, he holds the title of director of acquisitions for Waterfront Communities Inc., owned by the Allens.

Easley appointed Campbell to the N.C. State University Board of Trustees in 2001 and reappointed him in 2005. Campbell was elected chairman of the NCSU board in 2007.

Easley also appointed Campbell’s father, D. M. Campbell Jr., to the N.C. Board of Transportation in 2001. He appointed McQueen Campbell’s brother, Brian Campbell, to the Aeronautics Council, an aviation advisory board.
Campbell and his relatives have ownership interests in at least 10 lots and six boat slips in Cannonsgate.

In addition to his Cannonsgate lot Mike Easley and his wife Mary own homes in Southport and Raleigh. The Raleigh home just underwent a major renovation. They also co-own another home on Bald Head Island with Ealsey’s brother Henry.

The confessions of a judiciary junkie