Ex-gov will get back law license; State Bar says he 'accepted responsibility' 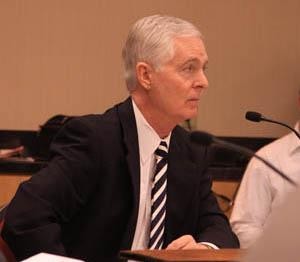 Public records show that while former Gov. Mike Easley’s campaign organization has paid only $5,335 toward a $100,000 election law fine issued in October 2009, he has paid off a $494,000 mortgage loan for a Carteret County waterfront lot and borrowed several hundred thousand dollars against his Raleigh home since the fine was levied.

State law did not require Easley to pay the State Board of Elections fine from personal funds, but he publicly has accepted responsibility for filing false campaign reports. He eventually took a felony plea for failure to report aircraft travel donated by his friend, Raleigh businessman McQueen Campbell, and was forced to surrender his law license temporarily.

The State Bar has said it will restore the license at the end of 2012, and will not require Easley to pay any fines associated with his felony plea. It cited Easley’s claim to have accepted responsibility as a reason for letting him resume the practice of law.

Elections Board member Chuck Winfree believes Easley should not be able to regain his law license without repaying his fine. “It goes back to him accepting responsibility,” Winfree said. “He had a large quantity of money in his hands, but he didn’t see fit to pay off his campaign obligation.”

The State Bar considers the matter closed and has said it will not discuss the situation further.

After five days of public hearings in October 2009, the Board of Elections fined the Easley campaign committee $100,000 for failure to report aircraft travel donated by Campbell. The board also asked the Wake County District Attorney’s Office to investigate the possibility that the former governor and others might have violated other laws.

A campaign finance report showed that Easley’s campaign committee had $427,706 in cash when he left office in January 2009. Subsequent reports show the committee paid most of that to attorneys.

In March 2010, Easley Committee attorney John Wallace sent a check for $5,335 to the Board of Elections toward the committee’s $100,000 fine. Wallace told the board that the committee had no more funds and it had closed its bank accounts. State law doesn’t make candidates personally responsible for campaign committee fines.

After lengthy state and federal investigations, in November 2010 Easley pleaded guilty in Wake County to a felony campaign finance violation involving the filing of a false report. He was ordered to pay a $1,000 fine but received no active prison time.

Easley is an attorney and a former state attorney general. Because of the felony conviction, Easley surrendered his law license in December 2010 to the State Bar, the state agency responsible for regulating the practice of law in North Carolina.

The News & Observer of Raleigh reported Jan. 6 that a disciplinary hearing panel of the State Bar had reached an agreement with Easley’s attorney Alan Schneider, and that Easley’s law license would be restored..

In a published consent order, the three-member panel concluded that Easley’s actions were serious enough to warrant a suspension, but that “Easley has accepted responsibility for the content of the campaign finance report underlying the conviction.”

The panel, and Easley through his attorney, already had negotiated a two-year suspension, and that stipulation was written into the order. Easley received credit for the past year’s suspension and his license will be restored in December.

A subsequent N&O story pointed out factual errors in the consent order, and the panel said it would revisit the order.

After learning about the deal between the panel and Easley, election board member Winfree told the N&O that Easley should not get his license back until he pays the full $100,000 owed to the elections board.

The panel eventually made minor modifications to the order, but the suspension remained the same. The modified order did not address the unpaid election board fine.

In December 2005 Easley and his wife Mary purchased a lot in the newly developed Cannonsgate community on Bogue Sound across from Emerald Isle.

Four Easley political donors were involved in the project. Easley had appointed all four to state boards or commissions. Brothers Randy and Gary Allen, who both served on the Wildlife Resources Commission, developed the project. Department of Transportation board member Lanny Wilson provided financing for the project. N. C. State University Board of Trustees Chairman McQueen Campbell served as Easley’s real estate broker and worked for the Allen brothers on Cannonsgate and other coastal projects.

An April 2006 CJ report on the purchase showed that, based on comparable sales in the development, the Easleys got a deal when they paid $549,880 for a 0.36-acre lot at the Intracoastal Waterway and the entrance to the Cannonsgate marina. Less desirable lots had sold for as much as $699,000, according to public records. A subsequent story in the Charlotte Observer also reached the conclusion that the Easleys got a sweetheart deal.

Public records indicate the Easleys paid 10 percent down and borrowed the remaining $494,000.

But an N&O report from September 2009 revealed that the public records were not accurate. The newspaper obtained a closing statement showing that the seller had given the Easleys a 25 percent discount and the Easleys received $137,000 in cash at closing.

A lawsuit involving more than 200 plaintiffs alleged the Cannonsgate developers participated in a mortgage fraud scheme by inflating prices through phony sales records.

CJ was unable to determine the source of funds Easley used to settle his $494,000 loan, but it may have come from money borrowed against his Raleigh home. On Aug. 6, 2010, Easley and his wife signed a deed of trust securing a $417,000 loan from North State Bank Mortgage. Their home in Raleigh, with a current tax value of $860,000, was used as security.

According to Carteret County public records, on Sept. 1, 2010, BB&T recorded a satisfaction of security instrument indicating the $494,000 loan for the Cannonsgate
Purchase had been paid. The current tax value for the lot is $225,412, but in 2007 the tax value was $1.2 million. The tax value of most coastal property has plummeted in the past few years.

When told of Easley’s Cannonsgate mortgage pay off, Winfree said, “We don’t know if it was paid in full. It may have been negotiated and it was just cancelled,” he said.

In addition to their lot in Cannonsgate and home in Raleigh, the Easleys also have a riverfront home in Southport with a tax value of $994,838, and a home on Bald Head Island.

Public records indicate that the Easleys co-own the Bald Head Island home with Mike’s brother Henry Easley. There is no recorded deed of trust, so records indicate they paid $250,000 in cash for it in 1996. It has a current tax value of $417,693.