Elections Board Looking At Wray Spending 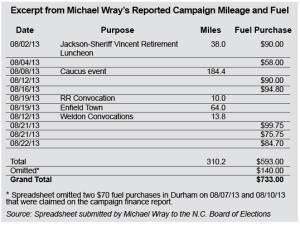 Responding to a State Board of Elections investigation looking into the possible use of campaign funds for personal benefit, state Rep. Michael Wray, D-Northampton, has submitted a document to the board that is at odds with public statements he has made about his campaign fund spending.

The document — a spreadsheet intended to provide additional information about his campaign spending — attempts to match fuel and meal purchases he made from July 2011 to June 2013 with campaign or legislative activities. Over that period, his campaign reports listed 427 fuel purchases amounting to more than $28,000, along with $17,700 for meals and other spending.

Wray paid for these expenses from his campaign account, even though he filed for and collected the per diem reimbursement every state lawmaker is entitled to receive covering many of the same expenses.

The elections board “required that Wray provide details regarding documented meals, mileage, and lodging expenditures which were not properly provided in the campaign’s disclosures,” said the board’s spokesman, Josh Lawson, to Carolina Journal. “Publicly filed disclosures indicate expenses in excess of $65,000 for mileage, $40,000 for meals, and $5,700 for lodging paid by the campaign since 2006. We are seeking clarification regarding numerous line-items within each category. Our investigation remains ongoing.”

Carolina Journal Online in June reported a separate financial issue regarding unpaid taxes. That report revealed that Wray, who is the deputy minority leader in the state House of Representatives, owed more than $100,000 in past-due federal, state, and local taxes, according to public records. Wray paid his past-due taxes after he learned that CJ was planning a story on his situation.

Wray serves as his own campaign treasurer. Wray has refused to speak with CJ about his tax issues or spending from his campaign account.

The N&O story led the elections board staff to ask Wray for more documentation of his travels. On Dec. 27, the board received a spreadsheet from Wray listing the campaign and official activities associated with his purchases using campaign funds. The spreadsheet is labeled “miscellaneous correspondence” and is posted on the board’s campaign finance website, along with Wray’s other reports.

The spreadsheet covers the period from January 2011 through mid-September 2013.

A CJ review of the spreadsheet and other information from Wray’s campaign finance report has found that many of Wray’s fuel purchases far exceeded the number of miles he claimed to have driven.

On July 28, CJ sent the following question to Wray via email: “Did you ever use your campaign fund to purchase fuel for vehicles normally driven by any of your family members?”

Wray was asked to call or email his answer but never responded.

• On July 15, a Monday, the spreadsheet shows a fuel purchase of $55 and a round trip from his home in Gaston to Raleigh of 184.4 miles for the Democratic Rural Caucus. On his campaign report for the same day he reported purchasing $55 in fuel in Norlina — a Warren County town 20 miles from Henderson. His campaign report shows an additional $95 fuel purchase in Nags Head the same day.

• From Nov. 14-25, the spreadsheet shows nine fuel purchases of $649, but only 216 miles of driving for allowable activities.

• From Sept. 19-23, the spreadsheet shows four fuel purchases totaling $263, but reported only 148 miles of driving for allowable activities.

• From Aug. 10- 15, the spreadsheet shows five fuel purchases totaling $331, yet reported only 166 miles of driving for allowable activities.

• From Jan. 22-25, the spreadsheet shows five fuel purchases totaling $320 while reporting only 95 miles of driving for allowable activities.

The General Assembly sets the salary for each legislator and expense reimbursement guidelines. Current rates were set Jan. 1, 1995.

Legislators also receive a subsistence payment of $104 each day the General Assembly is in session — $728 weekly, even though the General Assembly rarely meets Fridays, Saturdays, or Sundays. The per diem is intended to cover food and lodging. The $728 is tax-free if the legislator lives more than 50 miles away from the state Capitol building. Those living 50 miles or less from the Capitol must treat the per diem as taxable income, because those legislators are not expected to incur lodging expenses.

In addition, each member is reimbursed for one round trip per week from his or her home to Raleigh at a rate of 29 cents per mile. The federal mileage reimbursement rate for 2014 is 56 cents.

Candidates also may donate their campaign funds to charities or other political campaigns.

A random review of campaign reports by CJ revealed that other legislators bought fuel with campaign funds during legislative sessions when they also were receiving mileage reimbursements as well as during times the legislature was not in session.

The Right AOC on Point: Senate plan would create billions in savings for N.C. taxpayers

N.C. unemployed must now prove they are seeking work to continue benefits