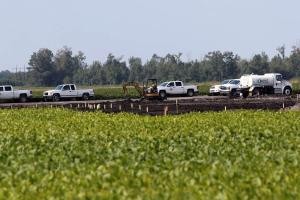 Amazon’s statement that its wind farm in northeastern North Carolina will provide electricity for data centers located near Washington Dulles International Airport, nearly 200 miles away, could be a problem for the federal regulators that police corporate advertising and promotion.

“Sometimes what companies think their green claims mean and what consumers really understand are two different things,” states a press release from the Federal Trade Commission, which has the authority to sue businesses that make fraudulent or deceptive advertising claims. Since 1992, the FTC has issued “Guides for the Use of Environmental Marketing Claims,” or Green Guides, as an attempt to monitor the truthfulness of advertising to U.S. consumers interested in environmentally friendly or “green” products.

The Green Guides “are not agency rules or regulations,” but instead “describe the types of environmental claims the FTC may or may not find deceptive under Section 5 of the FTC Act,” and “are designed to help marketers ensure that the claims they make about the environmental attributes of their products are truthful and non-deceptive.”

As Carolina Journal reported in a related story, even after the Amazon Wind Farm becomes fully operational, the Amazon data centers in Virginia will continue receiving their electricity from Dominion Power and the mix of fuels Dominion uses now — in 2013, that was 41 percent nuclear, 37 percent coal, 20 percent natural gas, and 2 percent renewable — making Amazon’s inferences that the data centers will be “green” questionable if not misleading.

FTC spokesman Mitchell Katz said his agency could not comment on the Amazon Wind Farm at this time.

Claiming that Green Mountain Power Company was using deceptive trade practices in the marketing of renewable energy to Vermont consumers, the Environmental and Natural Resources Law Clinic at the Vermont Law School filed a petition in September 2014 with the FTC, asking the agency to investigate the company.

“GMP is representing to its customers and to the public, through its promotional materials, public statements, and other communications that it s providing its customers with electricity from renewable sources such as commercial wind and solar projects, thereby reducing the customer’s carbon footprint and protecting the environment,” stated the complaint. It further explained that GMP was selling the Renewable Energy Certificates generated by those sources to out of state utilities and essentially double counting the renewable energy.

The petition stated that GMP was in violation of the FTC’s Green Guide for Renewable Energy Claims.

GMP responded that the company was in compliance with Vermont’s energy and environmental laws, its statements were not deceptive and the Green Guides do not apply to GMP and other public utilities.

In February 2015 the FTC wrote GMP and stated that the agency was still concerned about how GMP communicates to the public about its renewable energy generation facilities. “Although no findings have been made that these claims violate the law, we urge GMP in the future to prevent any confusion by clearly communicating the implications of its REC sales for Vermont customers and REC purchasers,” wrote Enforcement Division Associate Director James Kohm.

Based on a press release from the household products company Procter & Gamble, an Oct. 15 New York Times report stated that P&G planned to operate a group of its factories using wind power. “The global consumer products giant is teaming up with EDF Renewable Energy to build a wind farm in Texas that it says will power all of its North American plants that manufacture home care and fabric care products. Those facilities make some of the company’s best-known household items, including Tide, Febreze and Mr. Clean,” wrote the Times.

The wind farm is estimated to produce 370,0000 MWh of electricity annually. P&G’s North American facilities use about 300,000 megawatt-hours annually.

Myths and facts about the corporate income tax

Takeaways from the Senate budget