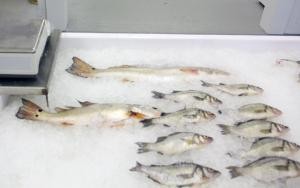 Red drum, spotted sea trout, and striped bass could be taken off the menu and off the market if a bill designating the three fish “game fish” becomes law. The law would make the species off-limits to commercial fishermen and consumers in order to preserve them for sport fishermen.

Bill sponsors claim the species are more valuable to recreational fishermen than to commercial fishermen and that making them game fish would attract tourism, create jobs, and generate revenue for the state. Commercial fishermen disagree, saying taking the fish away from them would cost the state money, destroy jobs, and limit choices to consumers.

The bill highlights an ongoing debate between recreational and commercial fishermen over who controls the fish in the sea.

Recreational fishing is a $3.7 billion dollar industry in North Carolina. According to the National Oceanic and Atmospheric Administration, the state has the potential to make it a $10 billion industry.

The bill takes red drum, spotted sea trout, and striped bass off the list of fish commercial fisherman are allowed to catch. The fish could be caught only by hook-and-line and could not be sold.

The three fish make up only 1.6 percent of commercial fishermen’s aggregate catch, he said. The number of fishermen making more than $2,000 a year on the species is fewer than 100.

“The value of binoculars sold to fishermen each year is more than the aggregate value of all three of those fish to the commercial fisherman,” McCormick said. “There’s absolutely no impact on them, but these are the three most popular recreational fish.”

McCormick estimates the state can squeeze more revenue out of each fish if it is caught recreationally rather than commercially.

He came up with the figure by dividing the total amount an average vacationer spends on a fishing trip by the number of fish he is allowed to catch on that trip. He says North Carolina’s fish attract tourists from all over the country, especially the Northeast.

“Those guys come down and bring $2,000, $3,000, $6,000, and they stay for a week and go fishing,” McCormick said. “They go to the restaurants. They stay at the hotel. They buy a boat. They spend a few hundred bucks in the tackle shop. They buy bait. Then they go out one day with a guide or on a charter boat.”

By increasing the fish available to sportsmen by 20 percent, McCormick concludes the state can more than double the size of the recreational fishing industry, and create 100,000 jobs.

McCormick said there are only about 77 “hardcore” commercial fishermen left in the state and that their jobs are not essential. He said the state would compensate them for lost wages for the first few years and help them transition into other lines of work.

“Think about tobacco farmers,” he said. “That is one of the models we’ll have to look at.”

McCormick added he’s “not trying to eliminate” the commercial fishing industry in the state. “We’re just trying to nurture the potential of recreational fishing in North Carolina.”

The fish are a public resource, he said, and they need to be reallocated to their most valuable use.

As for the potential inconvenience to consumers, McCormick suggested they could do without these fish. “They’re only three species of how many species do they sell? Maybe 1,000? They are only 1.6 percent of all the menu fish.”

Blue crabs make up more than 50 percent of the seafood harvested in state waters. Shrimp, shellfish, and numerous species of fish make up the remainder, McCaffity explained. “That is going to make the percentage of any finfish species harvested look small in comparison.”

The three species listed in H.B. 353 are not the primary targets of most commercial fishermen, he said, but are caught while fishing for other species. The fish make up varying percentages of the fishermen’s incomes, and for some it is much more than 1.6 percent.

Designating the fish “game fish” would force fishermen to throw back those caught accidentally, even though most would die anyway. McCaffity believes the waste eventually will lead to a ban on all commercial fisheries that interact with the species.

“This would destroy most of the remaining fisheries in state waters and greatly restrict our access to many other kinds of delicious North Carolina seafood like shrimp, spots, and flounder,” he said.

While the number of commercial fishermen in North Carolina has dropped significantly over the past two decades — which McCaffity attributes primarily to high taxes and complex regulations — far more than 77 make the majority of their livings on the water, he said. Many have second jobs to supplement their incomes.

“Regardless of the number, we should encourage the few remaining to continue supplying consumers with access to fresh local seafood and to preserve our proud heritage,” McCaffity said.

“Our state’s seafood is a public resource that should be available to everyone regardless of whether they harvest it themselves or access it through commercial fishermen, seafood markets, and restaurants,” McCaffity said.

Foster entertains recreational fishermen for a living. He takes up to six vacationers at a time on fishing tours. His father is credited with starting charter fishing off the isolated shores of the island of Hatteras in the 1930s.

“Recreational boats are sitting at the docks for lack of business right now, and it’s not because commercial fishermen have caught all the fish,” Foster said. “The reasons are economic, not resource-related. People can’t afford to take a charter trip.”

“The idea that somehow millions of tourists will suddenly materialize if you let them catch 12 [20 percent more] is ludicrous,” he said. “It’s a bogus argument.”

[Editor’s note: After this story was published, the Division of Marine Fisheries notified Carolina Journal that the limit on spotted trout was dropped in June from 10 per person per day to six.]

Foster laughed at McCormick’s job predictions. “The boat-making industry has collapsed because of the economy and people’s inability to buy boats,” he said. “The only ones who can make a living now are commercial fishermen, because they’re not dependant on someone to show up with discretionary funds saying ‘please take me out to have fun.’”

Foster also pointed out that McCormick used “a bunch of fancy multipliers” to determine the recreational value of a fish, while using no multipliers to determine the commercial value of the fish. A commercial fisherman may be paid only $1.50 per pound for fish he sells at the dock, but those fish are then sold in restaurants, hotels and grocery stores, he said. Also, commercial fishermen buy fishing gear and need boat repairs just like charter boat operators.

Who’s behind the bill?

While it’s disputed whether the state would make any money if H.B. 353 becomes law, the bill would cost the state financially.

The bill authorizes up to $1 million to compensate commercial fishermen for lost wages for three years. The state would take the $1 million from fishing license revenue, even though an agreement with the federal government stipulates the funding must be used to administer of the state Fish and Wildlife Agency. Diverting that money could cost the state between $15 million and $20 million annually over the three-year period in federal Wildlife and Sport Fish Restoration funds.

But Foster doesn’t think increased tourism, tax revenue, or job creation is the real goal behind the bill. These types of bills are typically pushed by the Coastal Conservation Association, a sport fishing group responsible for net bans in Texas, Louisiana, Mississippi, Alabama, Florida, and Georgia, he said.

While the organization says its goal is to “conserve, promote and enhance the present and future availability of these coastal resources for the benefit and enjoyment of the general public,” Foster said CCA has “wiped out all the small-time coastal fishermen in these states, and they’d like to do the same in North Carolina.”

The North Carolina chapter of CCA listed the passage of H.B. 353 as its top legislative priority this session. The bill is unlikely to pass before the 2011 legislative session is over, but it could resurface in 2012.

Editor’s note: This story was modified after it was posted initially.