Affadavit seen as insufficient safeguard to keep non-citizens from polls 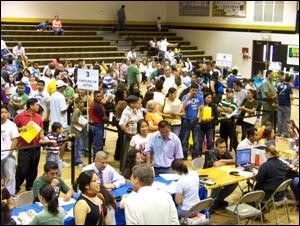 Anyone possessing a North Carolina driver’s license, a Social Security card, a utility bill — and a willingness to lie on a voter registration form — can establish enough “proof” of citizenship allowing him to register to vote in North Carolina.

Moreover, the state’s system of allowing voter registration by mail and same-day registration at early voting sites operates essentially on the honor system. The registration form requires each applicant to sign an affidavit confirming that the applicant is a U.S. citizen.

The penalty for “knowingly” providing a false statement on the form is a felony. But critics say the process for checking citizenship status is lax, so anyone with phony documents and no qualms about choosing untruthfully the “yes” box under “Are you a U.S. citizen?” has a good chance of beating the system.

The state’s efforts at verifying the accuracy of voter rolls have concentrated largely on making sure the lists have been purged of people who die, move, are convicted of felonies, do not vote over several election cycles, or change their legal names.

As for citizenship status?

“It’s tough to get anybody to admit that they have committed voter fraud,” former state Auditor Les Merritt told Carolina Journal. “It’s tough to ever prove, but there are certainly opportunities for people who are not here legally to vote.”

In 2007, Merritt’s office uncovered 24,821 invalid driver’s license numbers and 700 invalid Social Security numbers in the voter registration database; 380 people who appeared to have voted after their deaths; and a handful of votes cast by 17-year-olds in previous election cycles.

At the time, Gary Bartlett, executive director of the State Board of Elections, shot back: “Your office appears to have a fundamental misunderstanding about the data that was reviewed, or about the federal and state laws governing the voter registration process.” Bartlett said regular maintenance of the voter registration database resulted in 725,499 names of inactive or dead voters being removed during a 19-month stretch.

“We kept monitoring the elections rolls, if you will, and I think by monitoring them, it led to getting some monies from the legislature and cleaning up the rolls somewhat,” said Merritt, who is now executive director of the Foundation for Ethics in Public Service. The State Board of Elections received a $1 million-plus appropriation for that project. “But the controls are no better,” he said.

SBOE says safeguards in place
Veronica DeGraffenreid, elections liaison for the State Board of Elections, says the state has adequate safeguards in place to make sure that non-citizens do not get on the voter rolls. In 2006, “North Carolina began requiring DMV customers to present a valid Social Security card when they applied for an original North Carolina driver license or learner’s permit,” she wrote in an e-mail. “If the customer is not eligible for a Social Security card, he or she must provide documentation issued by the United States Government indicating legal presence in this country. This requirement is designed to prevent undocumented aliens from obtaining a North Carolina driver license. As of 2009, only New Mexico, Illinois, and Washington allowed undocumented immigrants to obtain driver licenses.”

Even so, applicants with fraudulent Social Security cards can slip through the cracks.

“The problem arises during the One-Stop voting process,” said James Johnson, a retired electrician and precinct judge in Cumberland County who started the group North Carolinians for Immigration Reform and Enforcement in 2007.

“A resident who is qualified may register in person and vote at a One-Stop site in the person’s county of residence during the One-Stop absentee voting period,” Johnson said. “There is not enough time to check the info that is presented for validity, hence the vote goes right through and is counted. If there is a precinct that has a large illegal alien population, [illegals] could, theoretically, wait until very close to Election Day and flood the One-Stop offices with registrations, and there would not be time to check them.”

Consulate helps Mexican nationals obtain state ID
The Mexican Consulate in Raleigh has worked vigorously to ease the process of obtaining U.S. government identification, traveling throughout the state monthly to provide Consular IDs to Mexican nationals. The Mobile Mexican Consulate held drives at a Catholic parish down east in Shallotte in August and at Concord High School near Charlotte in September.

The CID, or Matricula Consular ID, is a government identification card issued to Mexican nationals living outside Mexico, regardless of their immigration status. Also known as the Mexican CID card, it has been issued since 1871.

The consulate has said it sponsors mobile drives so that Mexican nationals can obtain passports or CIDs without having to go to the consulate’s permanent office in Raleigh. The consulate charges about $35 for a passport and $27 for a CID, the latter of which is accepted by every state agency in North Carolina.

Possessing the ID allows Mexican nationals to open bank accounts, though some activist groups have claimed they also can be used to obtain driver’s licenses, apply for food stamps and other public benefits, or even register to vote — a claim Consul General Carlos Flores Vizcarra told WWAY-TV is “totally false.”

“Those things are so rife with fraud, it’s ridiculous,” said Hans von Spakovsky, a former civil-rights attorney at the U.S. Department of Justice who is now a senior legal fellow at The Heritage Foundation. “No major bank in Mexico accepts the cards. Twenty-two out of 32 Mexican states reject it.”

The Mexican Consulate has not responded to requests by CJ for comment.

The DMV in 2004 launched Operation Stop Fraud and began requiring applicants to provide documents issued by federal or state governments, such as valid out-of-state driver’s licenses, or passports validated by the federal government. According to the DMV — confirmed both by examiners at the Graham and Hillsborough bureaus, as well as the agency’s website — Matricula Consular IDs constitute acceptable forms of identification for proof of residency to obtain a driver’s license, and the DMV does not check immigration status before issuing one.

“The driver’s licenses and Social Security numbers are checked through their respective organizations,” Johnson said. “However, if the documentation is forged to start with, it is forged in such a way as to match up paperwork-wise, just not to that particular person. This is actually the way most illegals are subverting the voting process.”

In a 2008 legal memorandum for Heritage, Spakovsky suggested that elections officials could check citizenship status with E-Verify, an Internet-based system allowing employers to verify whether someone legally is eligible to work in the U.S. Likewise, he wrote, courts could notify elections officials when people summoned for jury duty from voter registration rolls are excused because they are not citizens.

The 2006 session of the General Assembly required state agencies and contractors to use E-Verify to check the citizenship status of employees; it has not extended the use of that database to verify the citizenship of voters.

In Arizona, thousands of registration forms were turned in at the final day of the registration period, possibly too late to give officials time to verify that the applicants were U.S. citizens and eligible to vote. In Colorado, 6,000 registration forms filed by a Hispanic group aligned with the Service Employees International Union were rejected because the secretary of state’s office was unable to contact the applicants by mail to verify their addresses.

The Arizona case was worrisome even though, as Spakovsky noted, Arizona and Georgia have passed laws intended to curb voter fraud. In 2004, Arizona voters approved a referendum requiring that anyone registering to vote provide proof of citizenship — say, by presenting a birth certificate, passport, or (from naturalized Americans) citizenship papers. Georgia lawmakers passed a similar measure last year.

“It would be helpful if you required ID at the polls,” Merritt said. “It’s awfully easy for somebody else to vote for them. It’s very hard to track. We need to have our controls tough enough to make sure we’ve got fair elections.”

Kristy Bailey is a contributor to Carolina Journal.