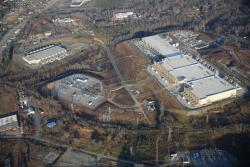 Solar energy has been touted by its advocates as a dependable energy source for the future, but in a document submitted to the state by a solar company affiliated with Google, the reliability of solar energy is listed as zero.

“Solar is an intermittent energy source, and therefore, the maximum dependable capacity is 0 MW,” Rutherford Farm LLC, a subsidiary of Chapel Hill-based Strata Solar, wrote in a May 2013 “ application to the North Carolina Utilities Commission.

Google announced in late November 2015 that it would participate in a new Duke Energy program allowing the Internet giant to buy power from the Rutherford Farms solar facility, to be located in Rutherford County, to run its new data center building located in Caldwell County, 50 miles away, near Lenoir.

But Google did not mention in its press releases that the entire Caldwell County complex will continue to receive all of its power from Duke Energy, generated with the same general mix of fuels used by other Duke customers — dominated by nuclear, coal, natural gas, and hydro.

Neither Google nor Duke will divulge just how much per month, in addition to its regular power bill, Google will pay Duke to claim ownership of any megawatt-hours generated by the solar farm.

Construction has not begun on the designated solar facility near Forest City, even though the Utilities Commission approved it two years ago.

Google is not alone in sharing incomplete or misleading information about its efforts to use renewable energy. Carolina Journal has reported on claims by Amazon that it will power a data center in northern Virginia with power from a wind farm being built near Elizabeth City, N.C., scheduled to be operational in late 2016.

The claims by Google, Apple, and Amazon are based on the concept that each is offsetting some of the megawatt-hours their data centers use with power generated by wind, solar, or other renewable sources.

But they fail to mention that since electricity generated by wind and solar is intermittent and not dependable, they could not operate their power-hungry data centers 24 hours a day on electricity from those sources and must continue to rely almost entirely on electricity produced by traditional sources such as fossil fuels and nuclear power.

Solar farms operate on average at about 25 percent of capacity. For example, a 40-megawatt solar array would produce an annual average output of 10 megawatts. On some sunny days, for several hours it may produce 40 megawatts. At night it will produce 0 megawatts.

CJ also has reported that the environmental group Greenpeace, which says in its mission statement it “is openly opposed to nuclear, coal, and natural gas as sources for electricity generation,” has stated that negative publicity the group has generated about the high energy use of data centers has embarrassed these companies into starting or expanding their use of renewable offset programs and other “clean” energy plans.

In April 2013 Google released a policy paper outlining a way to allow “a broad range of companies like Google to buy large amounts of renewable power directly from electric utilities.”

Google convinced Duke to develop a program, and in November 2013 Duke formally asked the Utilities Commission to approve a “green source” pilot program. The commission approved the program the following month. Google will be the first customer of the program, called Green Source Rider.

The program is available for a customer’s new electricity demands from the Duke system after June 30, 2012. The matching renewable energy source must have been placed in service on or after Jan. 1, 2007.

“This is the first time that we’re purchasing solar power in enough volume to power one of our data centers, and it takes us another step towards our goal to eventually power 100 percent of our operations with renewable energy,” the company posted on Google Green Blog in late November when the agreement with Duke was announced.

Through this program Google will continue to pay Duke under its existing monthly rate schedule, but extra charges will be added to cover the higher marginal cost of the solar energy.

While some of the extra fees are specified in the approved Green Source Rider details, the exact amount Duke will add to Google’s electric bill for the more expensive solar energy from the Lenoir campus is not public information.

Wheeless also told CJ that a lot of interest has been expressed in the Green Source Rider program, and he expects more agreements in the future with companies that want to support renewable energy projects.

Rutherford Farm LLC submitted an “Application for a Certificate of Public Convenience and Necessity and Registration as a new Renewable Facility” to the North Carolina Utilities Commission in May 2013. The facility will be located on Ferry Road, five miles south of Forest City.

The application stated the electricity generated will be sold to Duke Energy, but the projected annual sales are “filed under seal” because “it constitutes confidential and proprietary information.” The commission approved the project in March 2014.

In April 2015, an attorney for Rutherford Farm filed papers with the commission placing the project under the ownership of a new entity named Cypress Creek Renewables, a California-based company.

In August 2015, Duke filed with the Utilities Commission a copy of its power purchase agreement with Rutherford Farm, but the details are not available to the public.

“The agreement represents months of negotiation with the QF [qualifying facility]. Public disclosure would impair DEC’s [Duke Energy Carolinas’] ability to negotiate future purchased power agreements on favorable terms because future sellers would know what rates, terms, and conditions DEC is willing to accept and would begin their negotiations from that point,” the transmittal letter stated.

The size of the project has been reduced from 74 MW to 61 MW, according to Google.

CJ contacted Cypress Creek Renewables representative Michael Cohen, seeking more information about the status of the solar facility. Cohen confirmed that construction has not started and asked that CJ submit questions by email.

CJ asked Cohen to confirm the megawatt capacity of the facility along with the expected start and finish dates. CJ also asked if the Dec. 31, 2015, expiration of the state’s 35 percent income tax credit for renewable energy projects would affect the future of this project. At press time, Cohen had not responded.

Google’s data center in Lenoir became operational in 2007. A third building is nearing completion. In early December when CJ visited the site, it appeared that Google was operating or testing two backup diesel generators at the new building.

Google officials will not reveal the estimated electrical demand in megawatts, the annual megawatt hours the new building will consume, or the capacity of the diesel generators connected to each building.

While Duke’s new program meets the approval of Google, the program may not be enough for Facebook, a company that has a major data center in Forest City.

Covering the December Paris climate change summit for the Raleigh News & Observer and other publications, Justin Catanoso, director of journalism at Wake Forest University, reported that Facebook’s sustainability chief, Bill Weihl, stated during a panel presentation that his company would be unlikely to expand in North Carolina “because of new legislative policies that back away from support for renewables,” Catanoso wrote.

Catanoso cited the expiring tax credit for renewable energy as one of the state’s “legislative policies.”

“We are only considering states with strong policies and a determination to produce renewable energy,” Weihl said.

An aerial photo taken by CJ on Dec. 8, the date Catanoso’s article was published, indicates construction at the location started recently. An employee of the Forest City building inspections office told CJ that Facebook applied for a building permit in October but site preparation work had started.

CJ sought clarification from Facebook’s media office. A spokesman said the company has broken ground for the expansion in Forest City, and the project should be complete in 18 months. When asked about Weihl’s comments in Paris, he said the company had no comment on those reported remarks.