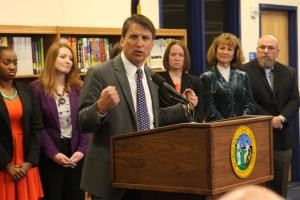 Early career teachers will get pay raises starting in the fiscal year beginning July 1, and teachers with up to seven years of service will collect double-digit percentage increases, Gov. Pat McCrory announced Monday. The package is expected to cost less than $200 million and will not require a tax increase.

In a show of unity with election-year overtones, the governor, Lt. Gov. Dan Forest, House Speaker Thom Tillis, and Senate leader Phil Berger, all Republicans, said GOP economic policies that helped to spur increased revenue, and prudent fiscal management, made possible the raise in base pay from $30,800 to $35,000 for more than 42,000 teachers.

“At $35,000, North Carolina will at least be competitive nationally, and a leader in the Southeast for pay, and ahead of Tennessee, Georgia, and South Carolina in base pay,” McCrory said.

Though the pay hike would be the most significant in more than a decade, teacher union officials and Democratic U.S. Sen. Kay Hagan said the raises were insufficient.

Democrats failed to raise teacher salaries in the last half decade of their control over the General Assembly, McCrory noted.

“Teachers have only received a 1.2 percent raise in the past five years, and frankly that was a raise made possible by [Berger and Tillis],” McCrory said at Ragsdale High School, his alma mater, surrounded by lawmakers, teachers, students, and former classmates.

The new pay hike will come in two phases — $2,200 the first year and $2,000 the second — a 14 percent hike, for teachers with up to five years’ experience. Teacher with between six and nine years, who qualify for higher pay than less-experienced teachers under the current salary structure, will reach the $35,000 base with raises ranging from $550 to $3,780, or 2 percent to 12 percent.

McCrory also announced “substantial raises” effective Jan. 1 targeting more than 3,000 nurses, highway patrol officers and others “whose base pay was too low for too long,” and uncompetitive with private sector pay.

Berger said bills will be introduced in the short session on the pay raise and master’s supplements.

“We’ve had discussions with members of both the House and Senate, and both these pieces of legislation will pass without any difficulty whatsoever,” Berger said.

“This pay announcement today is just the first step of our long-term plan” to improve academic performance of students by ensuring effective and well paid teachers in every classroom, McCrory said.

“As the revenue picture becomes clearer in the coming months, [our goal] is to roll out additional proposals this year that will cover even more of our teachers, and also other state employees,” McCrory said. Easing testing requirements to give teachers more flexibility in classroom instruction also will be discussed during this year’s short session.

While calling pay raises for new teachers “a step in the right direction,” Mark Jewell, North Carolina Association of Educators vice president, said, “We were hoping to see something more widespread, that was comprehensive, that would be a long-term plan to get teachers across the state a pay raise.”

The teacher lobbying organization’s position was to either give about a 10 percent pay raise across the board to make up for past salary freezes, or have a multi-year plan to raise teacher salaries to the national average within three or four years, Jewell said.

“You’re going to have a teacher with two years making the same as a teacher with 10 years,” Jewell said. “When you don’t give across-the-board pay raises, you have winners and losers, and this has definitely more losers than winners.”

The move also sparked swift reaction from Hagan’s office. Tillis is challenging Hagan, a Democrat, in her first re-election bid.

“Increasing salaries for North Carolina’s hardworking teachers is undoubtedly a worthy goal, and the General Assembly should right the wrong they committed when they let North Carolina teacher pay stagnate,” a Hagan campaign news release said.

“However, that doesn’t change the fact that Tillis’ current effort is a bandage over a gaping wound he created in our public school system,” the attack message said.

Tillis said the Republican-led legislature has taken measured steps to reach a point at which pay raises can again begin to flow.

“When we came into leadership of the House and Senate we had over $1 billion in commitments to recurring obligations that the money wasn’t there,” Tillis said. He blamed that “fiscal crisis,” in part, “on making a promise that the prior leadership couldn’t keep.”

Now, after three years of “hard work, and repairing this economy, and putting it on financial footing, we can make promises that we keep,” Tillis said. “We can end practices that were a betrayal of promises, like using lottery funds for purposes other than education.”

He said legislative leaders and McCrory wanted to be certain there would be sufficient money to pay for the raises should the economy stall again. Democrats miscalculated badly in 2009 and had to make the steepest budget cuts to education in the past decade, Tillis said.

Berger said collection of taxes and other assessments are running ahead of projections “in ways that the economists tell us result in the ability to project revenue in the future on a recurring basis at a higher level.”

He attributed that to GOP policies that have helped to lower unemployment by 2.5 percentage points over the past year and raised more state revenue.

More important, he said, “We’ve trimmed the growth in spending at the state level” that created additional resources to address priorities. Those included enhancing pay for teachers and state employees “in an appropriate and measured fashion.”

Berger said plans are to look for ways to raise pay for the rest of the state’s teachers and employees.

But that will be dependent on other revenue and spending numbers as they develop later in the year.

Berger noted in particular that unpredictability in Medicaid spending “has been a continuing problem for us over the past several years,” a fact McCrory noted for his call for “modest” teacher pay raises last year being scrubbed due to unanticipated Medicaid overspending.

Berger said there are no plans to revisit issuing pay supplements for teachers who earn master’s degrees “because there appears not to be the kind of data available that shows an improvement in student achievement based simply on a master’s degree.”

What lawmakers plan to do is adjust the cutoff with a grandfather clause “because people who started classes thinking that the supplement was available, we really need to keep the promises to those folks.”

“I really appreciate them admitting a mistake, and I won’t get into how that happened, but they quickly realized they hadn’t done the right thing,” said State Board of Education Chairman Bill Cobey.

“It may be that certain master’s degrees for certain areas of teaching or administration will in the future be eligible for supplements. But you know the legislative process. That’s going to be a lot of negotiation,” Cobey said.

Berger allowed that there could be conversations about pay supplements for those who earned a master’s in math or science because those positions are hard to fill.