Hot Dog Vendor Jailed for Operating Without a License

Owner of Outlaw Dogs says licensing procedure was too burdensome 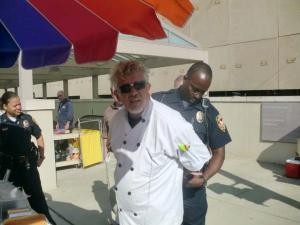 Pruner, a former executive recruiter for a company conducting clinical research trials, had to find another line of work when the economy went bad. Self-employed, with a mentally handicapped 26-year-old daughter and a 48-year-old brother on kidney dialysis depending on him for support, running a hot dog cart seemed to be the ticket. It wouldn’t require much capital, he could be his own boss, and he could even build a cart himself, he thought.

But Pruner never anticipated how much red tape would stand between him and the “American dream.”

Unable to build a box-on-wheels that satisfied city planners, Pruner ended up purchasing a “professional” pushcart for $2,500. Next, he set out to get a vending permit from the city, but found out he also would need to get a health permit from the county. Total cost: $150.

Before he could get a health permit, however, he’d need an inspection. To get an inspection, he would have to enter into a “commissary agreement,” requiring him to prepare his food, wash his cart, and store his supplies in a permitted restaurant or commissary.

Pruner claims it’s nearly impossible to convince a restaurant owner to enter into such an agreement, unless you are a friend or family member. Those who do make the agreements hardly ever honor them, he said.

“They’re supposed to go there every morning before they open and in every evening after they close, but no one does,” Pruner said. “It’s just a piece of paper. Once they get it signed, they’re cleaning their carts at home just like I did.”

Finding the rule an “undue restriction” on what he deems his “constitutional right to work,” Pruner chose to ignore it and to open his business — Outlaw Dogs — without permits about nine months ago.

Since then, the health department has tried to shut him down three times — first politely asking him to leave his vending spot, then issuing a cease and desist order and suing to have him declared a “public health hazard,” and finally having him jailed for 24 hours on Oct. 27.

The Durham County Superior Court issued a permanent injunction against him Nov. 2, and his business has been closed ever since.

Mark Myer, food and lodging supervisor of Durham County Health Department said the commissary rule is state law, enforced by the North Carolina Department of Environment and Natural Resources (PDF download). The law and subsequent regulations were enacted in the early 1990s and haven’t been updated since.

The idea, he said, “is that the operator has permanent facilities that are inspected [and] that they use as their kitchen rather than their garage or the side of the road or a storm drain to dump their waste.”

Myer admits there is no way to ensure that vendors are using the facilities on a daily basis.

“They are sort of on the honor system,” he said.

Often the commissaries collect rent payments from the vendor, he said. “So they’re not going to call and say ‘he’s not showing up.’”

Myer disagrees that it is “nearly impossible” to get a commissary agreement and points to the county’s 18 permitted hot dog vendors as proof. However, he said it is unclear how many of those permits are active.

“Our rulemaking process is onerous,” Myer admitted. “It’s difficult. And it is that way because of necessity. But, at the same time, business and industry haven’t figured out a way to help us get rules in place that not only work for public safety but also work for them.”

Even so, Myer is not satisfied with the static nature of the current regulations. “We’ve been talking about it for a decade and every county has been screaming at the state — ‘fix this’ — but it hasn’t happened yet,” Myer said. “Now with all the pressure in the economy — and the food business is always ahead of the curve when it comes to regulations and innovation — the state just hasn’t been able to keep up.”

The Institute for Justice, a libertarian civil liberties law firm, has taken interest in Pruner’s case. Robert Frommer, a staff attorney specializing in economic liberty cases, suspects restaurants are behind the regulation.

“We’ve seen this in a number of cities around the country, where brick and mortar restaurants want to use the power of government to prevent honest competition,” Frommer said.

If the government were interested in protecting public health, he said, there are less burdensome ways to do it, such as inspecting the vendor’s home and/or his pushcart in the location of operation.

Myer said the county conducts about two inspections per year at the location of operation. “We look at the basic sanitation,” he said. “We ask them a few questions. We check temperatures.”

Even so, Myer said “it would be grossly impossible for us to do field-testing” of the carts for bacteria, “and it would be a dicey legal situation, where any lawyer could rip us to shreds if we’re not a certified lab. Having a mobile certified lab just wouldn’t be practical. There’s no way anybody could afford that.”

“We say we want people to be self-starters and that we want people to have entrepreneurial drive,” Frommer said, “but there are so many rules and restrictions in place it’s forcing a lot of people who’ve hit a rough patch to not be able to take care of themselves and forcing them to become a ward of the state, which is sort of contrary to what we generally think of as the American dream.”

“I’m not asking for welfare or food stamps,” Pruner said. “I’m just asking to be able to work on the same corner you can legally beg on.”

Pruner plans to take his case to the North Carolina Court of Appeals.