Eudy was monitoring the progress of ACP environmental permits that would be issued by the N.C. Department of Environmental Quality, negotiating a related $57.8 million discretionary mitigation fund to be paid by the ACP partners to Cooper, and monitoring a dispute between solar energy providers and Duke Energy. Hawkins was his contact for all these issues.

After assuring Hawkins he would help, Eudy made some calls. He learned the official was N.C. Department of Natural and Cultural Resources Deputy Secretary Kevin Cherry. 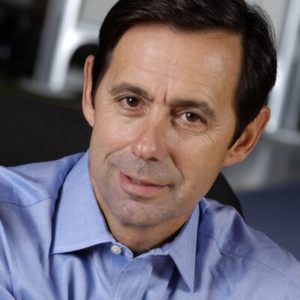 But Cherry already had signed the Programmatic Agreement and transmitted his signature page to FERC. Eudy wanted the document “recalled” so he could review it.

Cherry’s explanation to Bowman doesn’t match the official record. Documents show Cherry had reviewed the agreement before signing it. Eudy had initiated the recall.

The ACP project is a 600-mile natural gas pipeline project that will be built in West Virginia, Virginia, and North Carolina. Dominion Energy and Duke Energy are the major partners. FERC granted final approval to the project in October 2017.

On Jan. 26, 2018, DEQ issued the water quality permit. That day, Cooper’s office announced the ACP partners would provide Cooper a $57.8 million discretionary fund to be used for mitigation, economic development, and renewable energy projects. Three days later, solar developers announced they reached an agreement with Duke Energy on how to handle new projects.

Reporting by Carolina Journal and others suggests the ACP water quality permit was contingent on two concessions — Cooper getting $57.8 million and Duke Energy caving to the demands of solar-energy developers on an issue unrelated to the pipeline.

Eudy’s recall of the PA looks to be connected to the Cooper administration’s plans to sell the ACP to the public — including environmentalists who oppose the pipeline.

On Thursday Jan. 18, four days after Cherry recalled the PA and the day after Cooper and Duke CEO Lynn Good had the ACP phone conversation, Eudy released an internal plan to sell the public on the approval of the ACP, the $57.8 million discretionary fund, and a separate agreement Cooper had brokered between Duke Energy and solar energy companies. The first item: Resend Cherry’s signature page to FERC officials. Cherry did so that day, completing the PA.

The next day, FERC authorized ACP to begin limited tree cutting in the pipeline corridor in West Virginia, Virginia, and North Carolina.

The $57.8-million fund caused immediate controversy. Cooper would have controlled the fund without legislative oversight, unlike other money that flows into state accounts. The General Assembly redirected Cooper’s fund to the school systems in the eight N.C. counties affected by the pipeline. The General Assembly has also convened a special committee to investigate the pipeline permitting process and the fund. Some lawmakers have called the approval process extortion. The committee has hired outside investigators to review the process.

A host of media outlets, including CJ, requested ACP-related public records from Cooper’s office. The governor released nearly 20,000 pages of them in December 2018. WRAL News organized the documents in a searchable database.

The first document in the file wasn’t requested. It’s a transcript of a long interview in February 2018 between Eudy and WRAL reporter Travis Fain. The transcript provides Eudy’s version of the events. In it, Eudy said he brought up the recall issue and said he initiated it because “I just want to see what we commit to or what it requires us to do, does it require us to do anything?”

Duke’s Hawkins did not respond to questions about the recall incident.

DNCR Environmental Review Coordinator Renee Gledhill-Early was the North Carolina contact for the development of the PA. She had been working on ACP issues since 2015. She reports to DNCR Historical Resources Director Ramona Bartos. Bartos reports to Cherry, and he reports to Department Secretary Susi Hamilton.

On Dec. 4, 2017, Gledhill-Earley submitted her comments to FERC on the draft PA.

On Wednesday, Jan. 10, 2018, FERC’s Bowman emailed about 40 people, including Gledhill-Earley and her counterparts in the other ACP states involved in the PA process: “Final Programmatic Agreement for the ACP/Supply Header Projects for Signature,” indicating the agreement was attached. Gledhill-Earley then emailed the document to Bartos and Cherry. “The final PA, which they would like us to sign. It’s all there, in case you want to review it,” she said.

The next day, Gledhill-Earley emailed Cherry. “Kevin, when will you be in to sign the PA?” Cherry responds: “I will be in late afternoon [Friday].” Gledhill-Early: “Thank you. I’ll catch up with you.”

That exchange wasn’t included in the documents released by Cooper’s office to media outlets in December. CJ got them through a separate document request to DNCR.

Gledhill-Early declined comment to CJ on her interactions with Cherry.

Apparently unaware the PA was signed Friday, Duke’s Hawkins texted Eudy at 9:55 a.m. Saturday. “I need to chat with you re another significant issue. Any chance you can spare a few mins today. I am sorry to be a constant pest,” she said.

“Every state has signed the historic preservation agreement except N.C. Once N.C. signs we get the go ahead from FERC to proceed with cutting trees in Va and W Va. It has to be signed by the State Historic Preservation Officer. I understand it is on Kevin Cherry’s desk,” Hawkins said.

“First I’ve heard of this. What the heck?” Eudy responded.

In a 12:52 p.m. text, Hawkins told Eudy the N.C. contact was Gledhill-Earley, not Bartos. She was embarrassed she hadn’t known before Friday that an N.C. signature was required.

Hawkins said when FERC issued the final PA for signature on Jan. 10, ACP contacted Gledhill-Earley, who told ACP Cherry had no concerns and it would be signed. “N.C. is the final signature required for FERC to issue the Limited Notice to Proceed in tree felling. Can you please help me, Ken?” she said. 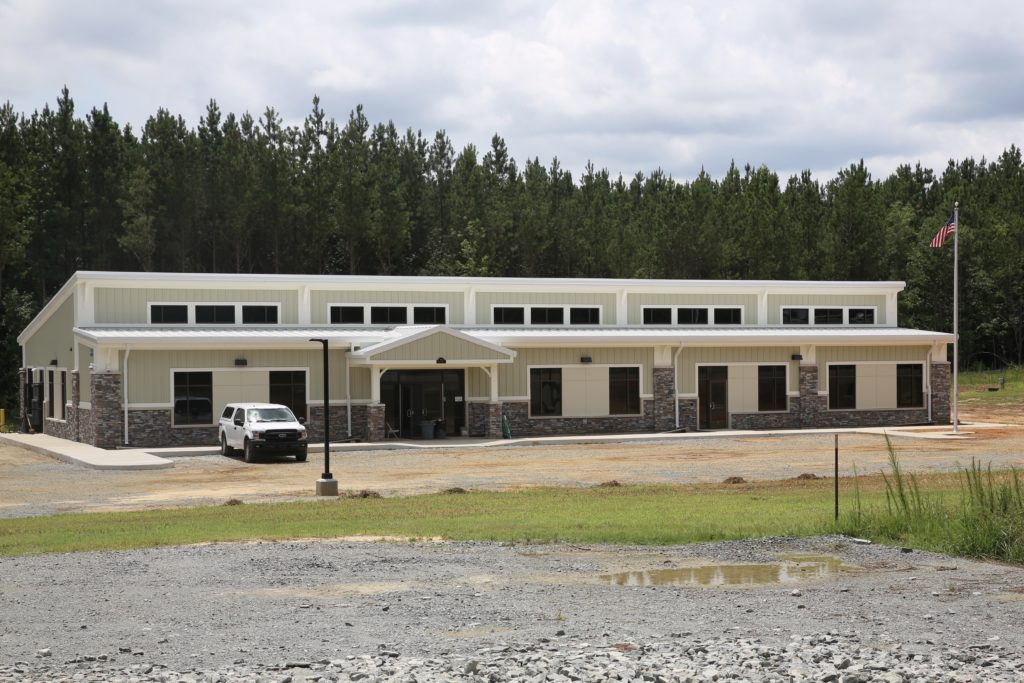 The Atlantic Coast Pipeline operations center in Northampton County is one of two set for North Carolina. (CJ photo by Don Carrington)

But emails suggest Eudy went on a hunt Saturday to find out more about the PA. He learned it had been signed and sent to FERC the previous day. On Saturday at 4:04 p.m., Gledhill-Early emailed Bartos, Cherry, and Hamilton: “As requested, I am forwarding a series of emails related to the ACP.”

By Sunday morning Cherry and Eudy were communicating directly. “Sorry for just getting this to you. I sent to Secretary Hamilton immediately upon request and thought that she was forwarding then,” Cherry wrote to Eudy.

At 1:42 p.m., nearly three hours after Eudy knew a FERC official acknowledged Cherry’s recall request, Eudy first raised the legal review issue with McKinney. “I need to understand how this could get negotiated and signed at DNCR without their legal counsel’s review,” Eudy said in an email.

At 2:11 McKinney emailed the PA to DNCR attorney Phillip Feagan: “Did you ever review or look at the below? Can you call me?”

At 2:40 McKinney wrote Eudy: “I spoke with Phil. He says that he received the documents yesterday (Saturday) via NCDOJ counsel to the Department. He told me that typically he clears documents like this that are going to the federal government. However, outside monument removal issues, he said he does not deal with the State Historic Preservation Office in many matters. He is looking into how these negotiations developed, and who was involved, and then to provide me with an update. Will relay.”

Documents suggest Eudy was annoyed that no one had told him about Cherry’s role in the pipeline construction phase. “Please let me know why this issue didn’t get elevated to the governor’s office as we were discussing ACP issues,” Eudy asked Cooper’s policy director Jenni Owen in an email.

At 10:38 a.m. Sunday, Jan. 14, Cherry emailed FERC’s Bowman and two other FERC employees: “I would like to recall our signature page on the Atlantic Coat Pipeline Programmatic Agreement. I signed this form by mistake. I was in the field all day on Friday and arrived back at my desk late to find a number of forms waiting for my signature. One stack held items upon which I had been briefed and had reviewed. Other items were near it. The ACP Programmatic Agreement was then inadvertently signed as I headed out the door to make another appointment. I am sorry for this misunderstanding.”

Bowman responded at 10:59: “Received. Thank you for letting us know. Please call me if there is anything you’d like to discuss further regarding this PA.”

Cherry responded: “Thank you for your understanding. I am most appreciative.” Cherry then emailed Eudy a copy of his conversation with Bowman.

But in April 2019, Cherry gave CJ a different story. When asked who directed him to recall his signature, Cherry said Feagan and Hamilton did because they hadn’t reviewed the document. When CJ requested any emails or text messages directing him to do so, the only communication the department provided was a text from Hamilton to Cherry sent Saturday, Jan. 13, at 12:44 PM. “Please give me a call ASAP regarding: acp,” it said.

Some pipe had been installed in North Carolina. But in December 2018, ACP put the project on hold when the U.S. Court of Appeals ruled against the pipeline partners in a lawsuit filed by the Southern Environmental Law Center.