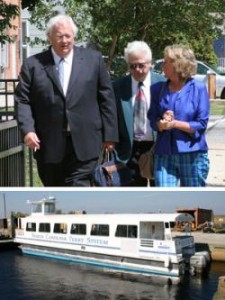 Twelve jurors and two alternates were selected yesterday for the trial of former N. C. Department of Transportation Ferry Division Director Jerry Gaskill. A federal grand jury indicted Gaskill, 63, of Cedar Island on Jan. 18 for illegal activities associated with the state’s efforts to establish a passenger ferry service across the Currituck Sound.

U. S. District Court Judge Terrence Boyle presided over the selection process after Gaskill pleaded not guilty to all charges against him. Boyle has another case to try prior to the Gaskill case and told jurors that they should expect to come back as early as Monday, May 8.

Gaskill is charged with conspiracy to violate the Clean Water Act and the Rivers and Harbor Act, actual violations of both acts, and with making material false statements about those activities.

The indictment alleges that Gaskill and another unnamed person agreed in January 2004 to force Ferry Division workboats into the Corolla basin in order to create a deeper channel, knowing that no permits had been obtained for such an activity. The indictment then alleges that on May 6 and 7, 2004 Gaskill and others actually carried out that operation to “prop wash” the channel. The indictment further alleges that on June 25, 2004 Gaskill signed a written false statement claiming the creation of the channel was unintentional and submitted that statement to the United States Army Corps of Engineers.

So that potential jurors could declare any potential conflicts, Boyle read them a list of approximately 25 other witnesses that are expected to be called.

Previous stories by Carolina Journal revealed the new ferry service faced several obstacles. Plans for the project were initiated soon after the Currituck County Board of Commissioners asked state Sen. Marc Basnight in July 2002 to help establish a ferry service to transport about 40 school children from the Outer Banks to the mainland. Although proponents of the ferry said it was needed for school children, documents suggest that the service was intended to transport resort workers and tourists. Students had been attending Dare County schools on the Outer Banks.

The 2002 budget bill ordered DOT to do a feasibility study. Gaskill conducted a study and submitted it to the General Assembly in May 2003. The proposed route would be about 12 miles across the shallow Currituck Sound from the Currituck community to the Corolla community.

“The proposed ferry service is feasible, assuming the appropriate permits can be obtained,” Gaskill concluded in the study. But he failed to address two previous unsuccessful attempts by Currituck County to obtain a dredging permit for the very shallow Corolla location. State and federal environmental agencies had ruled that the area was a sensitive marine habitat that needed to be protected. At the time of the illegal dredging, neither DOT nor Currituck County had applied for a permit.

After the illegal dredging became public the project stalled. Then in May 2005, frustrated with the lack of progress, Basnight called a meeting of all the state agencies involved in the project. The group arrived at a plan to build an 1800-foot pier that would reach into deeper water. That plan was scrapped after news organizations raised concerns about the safety of the school children. The latest plan to build a 500-foot pier in a different location is on hold.

The student situation has also changed dramatically. After the students were barred from Dare schools and forced to take a long bus ride to reach the Currituck mainland, parents made other schooling arrangements. At times only one child was making the bus trip this year. The school systems have indicated that they will be returning to the previous arrangement.

The 49-person, 50-foot pontoon boat ordered for service was delivered in August 2004 to the State Shipyard in Manns Harbor. The Virginian-Pilot of Norfolk has reported that DOT is considering selling the boat because the Coast Guard ruled that the boat is not fit to run across the sound.

Takeaways from the Senate budget