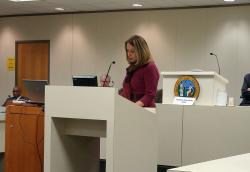 Members of a legislative subcommittee on Thursday heard recommendations to eliminate the requirement for occupational licenses in many jobs, and instead move to a certification process.

A subcommittee of the Legislative Administrative Procedure Oversight Committee is considering changes and modifications to the state’s occupational licensing boards. Backers of the changes say they would enhance opportunities for potential entrepreneurs while protecting consumer health and safety. Opponents lodged safety concerns if occupations went unregulated and suggested potential damage to existing business owners.

Jon Sanders, director of regulatory studies at the John Locke Foundation, referred lawmakers to a provision in the state constitution saying residents have a right to the fruits of their labor.

Sanders said voluntary certification should be used instead of more restrictive licensing in occupations where practitioners who offer poor or ineffective services pose minimal risk of harm to the public.

If the state moved toward voluntary certification of occupations, then it also should impose penalties high enough to discourage fraudulent claims of certification, Sanders said.

Sanders said that moving toward a certification process for occupational regulation would open up “greater avenues” for lower income residents.

“Licensure costs are very large hurdles for the poor,” Sanders said. Getting licensed usually requires a fee, costly education, and training, which are more burdensome for poorer workers, he said.

Sanders said that restrictive licensure tends to boost the overall earnings of those already in a particular field, restricts the supply of labor to the occupation, and drives up the price of labor.

“Restricting the supply of labor also restricts the supply of jobs,” Sanders said. He said that leads to higher costs for consumers.

Rather than use a licensed professional, consumers “might decide to forgo necessary work,” Sanders said. “People might choose to do it themselves. They may seek out a family member or a friend who can do it. They can find someone who might do it under the table.”

Sanders said that moving to a voluntary certification model was preferable to a licensure model.

“These restrictions ripple through our economy, preventing people from pursuing their dreams, driving up the cost of services, impacting individuals, families, communities, the state’s economy, and whether businesses want to expand or grow here,” Gray said.

Bill Rowe, general counsel and director of advocacy at the N.C. Justice Center, said the review of the boards is a good idea.

The N.C. State Board of Opticians is one of 12 boards that the Performance Evaluation Division has recommended reviewing.

Jack Nichols, counsel for the opticians board, said the board was necessary to protect public safety. Instead of eliminating the board, he suggested that the General Assembly increase the maximum licensing fee from $200 to $300 so that the board can have more financial leeway.

Nichols said 10 percent to 15 percent of drivers licensed in North Carolina are designated with a requirement to wear corrective lenses. “That alone I believe establishes the need to protect the public,” Nichols said.

“[Opticians] require licensure,” Nichols said. “The elimination of licensure will force the closure of many small businesses, many of which are small, family-run enterprises.”