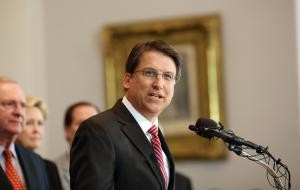 Gov. Pat McCrory unveiled his first budget Wednesday that would spend $20.6 billion in the next fiscal year, an increase of about 2.2 percent over the current fiscal year’s General Fund budget. The total state budget, including federal funds, fee collections, and other revenues, is $49.6 billion.

McCrory’s budget calls for giving state employees and teachers a 1 percent raise, provides $10 million for victims of the state’s decades-long eugenics program, adds $400 million to the rainy day fund, and adds $52.4 million over the next two years to pay for the state’s pre-kindergarten program.

It doesn’t call for tax increases, but would eliminate the estate tax, often referred to as the “death tax.”

McCrory said the state’s budget has a strong foundation, but has some cracks in it.

“Our immediate goal is to fill in those cracks, and fix the cracks so that we can have a stronger foundation for future generations,” McCrory said.

House Speaker Thom Tillis, R-Mecklenburg, reacted positively to McCrory’s budget, noting that it is a positive first step in a long budgeting process.

“Many aspects of Gov. McCrory’s budget are much-needed and long overdue, and I am especially glad to see the inclusion of the Eugenics Compensation Program,” Tillis said in a statement. “The House stands ready to work closely with the administration as the budget moves through the legislative process, and I am confident that together we can continue to put North Carolina back on the path to economic prosperity.

Berger went on: “His emphasis on paying off our debts and repairing our critical infrastructure reflects a vision and commitment to the long-term fiscal health of our state.”

Democratic leaders in the General Assembly weren’t so kind.

House Minority Leader Larry Hall of Durham County said in a statement that the McCrory budget “fails the ultimate test,” adding, “It does nothing to create jobs or grow our economy while continuing the Republican cuts to education.”

Hall called the budget a “smokescreen for their assault on middle class families.” He also criticized GOP tax-cutting efforts, saying that they’d provide millionaires with tax breaks and shift the tax burden to middle-class families.

“And it gives unnecessary tax breaks to the wealthiest of the wealthy,” Nesbitt said. “But the most alarming is what this budget hopes to gloss over: Gov. MCCrory’s impending tax plan that will place North Carolina’s tax burden squarely on the shoulders of the middle class and small businesses.”

State schools Superintendent June Atkinson, a Democrat, while acknowledging that McCrory had “challenges in developing a budget,” lamented some of the budget provisions.

Atkinson called the 1-percent raise was a “start on addressing teacher pay,” but that good news did not address fully problems in paying teachers adequately.

Since taking office in January, McCrory regularly has lamented the state of disrepair of many state government buildings and has said the state is lagging in its information technology infrastructure.

“As one specific example, the state needs an upgrade from Windows NT to Windows 7 because Windows NT will no longer be supported,” state budget director Art Pope said.

McCrory’s proposed budget would provide $28 million in 2014-15 to help implement the Excellent Public Schools Act. It would provide money to hire 1,800 more teachers, but cut out teacher assistants in the second and third grades. It would hold the line in in-state tuition in the UNC system, but increase out-of-state tuition.

It would repeal the N.C. Public Campaign Fund, which provides tax dollars for appellate court candidates’ campaigns, saving $4.1 million, and do away with the tax check-off providing funds to political parties, saving another $1 million.

The budget would provide $7.2 million to reinstate drug-treatment courts. It would appropriate $72 million to the state pension system over two years and pay $181 to the State Health Plan over the next two years.

The budget plan also would divert $65 million from the Golden LEAF foundation — funded by tobacco settlement payments — to the General Fund.

In addition, the budget would transfer attorneys providing routine legal services to state agencies who currently are housed under the attorney general’s office to the departments or agencies that they serve.

Curry takes special note of McCrory’s decision to end raids of the state’s Highway Trust Fund. “The John Locke Foundation has been calling for years for an end of the annual transfer of funds from the Highway Trust Fund to the General Fund,” she said. “Even though the amount of the transfer has been shrinking in recent years, the transfers still divert much-needed funds from highway construction and maintenance.”