North Carolina surpassed the $1 billion mark in renewable energy investment tax credits issued in 2018 — three years after the lucrative subsidy program to stimulate solar development expired. Taxpayers have picked up the bill, and could be on the hook for hundreds of millions of more tax credits in coming years.

The program allowed investors to claim a 35% tax credit on investments in renewable energy projects. N.C. Department of Revenue records show the state has doled out $1.025 billion in credits since 2010. The vast majority are for commercial solar installations.

The state wrote off $664 million in taxes — or 65% of the total — in the three years after the program was sunset. That’s because lawmakers structured favorable terms for investors. They have up to five years to claim the credits against the taxes they owe. Taxpayers with at least three renewable facilities worth $400 million or more have 10 years to claim the credits. 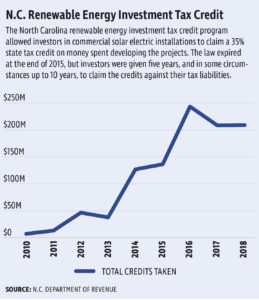 Those numbers are in stark contrast to General Assembly estimates in 2007 when lawmakers passed Senate Bill 3. The legislation created the tax credit program, and set a percentage of renewable energy use utilities had to meet over time.

“To the contrary, what I say — and I believe it’s able to be documented — is that what we’ve got is energy at a higher cost,” Dixon said. “Our electricity energy bill would be lower if we had no renewable energy.”

He said the $1.025 billion in tax giveaways could have been put to better use than helping large corporations pay lower taxes. He noted the amount nearly matches the $1.1 billion Republicans want to add to the state’s rainy day savings fund which shrunk after paying for hurricane-related disaster relief.

“The whole green energy thing has been a very lucrative, money-making proposition for a lot of people,” Dixon said. He acknowledges many lawmakers including his Republican colleagues have been swayed by renewable industry messaging.

“I call it the modern mania to legitimize false premises about the value of renewables,” Dixon said. “Renewable has a very strong lobby in the General Assembly.”

Dixon said commercial solar installations have gobbled up productive farmland, and disputes the job-creation numbers solar enthusiasts claim. He warns an environmental tragedy is looming because there is no definitive closure plan for the utility-scale solar plants once they exceed their useful life. CJ first wrote about that situation in 2015.

Blue Cross NC defended its participation in the program.

“We have a diverse investment portfolio that includes stocks, bonds, health care technologies and products, and, among other things, renewable energy projects,” Vevurka said.

As a North Carolina-based company, Blue Cross NC regularly invests in projects that spur economic growth and create jobs, he said. That includes direct investments in renewable projects in 40 counties. No credits were obtained from others.

“Based on the five-year timeline for credits, we expect to have similar levels of renewable energy credits for the 2018-20 tax years,” Vevurka said.

Duke spokesman Randy Wheeless said the utility has an obligation to make its solar projects as cost-effective as possible for customers.

“Tax credits are part of that equation,” Wheeless said. Duke owns and operates 40 solar electric generating plants in North Carolina. “We buy from more than 900 other solar farms in North Carolina, and I’m sure they take advantage of it, too.”

The General Assembly created a range of incentive policies to spur solar development. North Carolina is now second in the nation in installed solar capacity.

“Most people wouldn’t be surprised that the dominant utility in that state would be high on the list of taking advantage of tax credits for renewable energy,” Wheeless said.

Asked about the taxpayer optics of reaping such huge tax credits, he said people can agree or disagree with the incentive policy. But customers likely understand they benefit if Duke builds a $10 million solar installation, collects $1 million in tax credits, and puts the project on the rate base books at a reduced $9 million cost.

The N.C. Sustainable Energy Association responded to a request for comment by sending a passage from its recent  Economic Impact Analysis of Clean Energy Development of North Carolina. It stated:

“State incentives for clean energy between 2007 and 2018, including the now expired North Carolina renewable energy investment tax credit and state appropriations for the Utility Savings Initiative, totaled $1.2 billion. This has led to an additional $1.4 billion in tax revenue for state and local governments, an overall positive fiscal impact.”