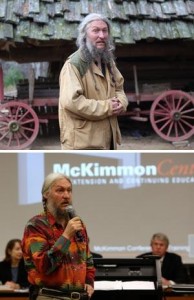 After receiving a tip that Conway had built structures without a permit, Watauga County Planning and Inspections Director Joe Furman obtained an administrative search warrant to inspect the roughly two dozen buildings and structures at Turtle Island Preserve, Conway’s 500-plus acre retreat in the mountains east of Boone. In September, Furman assembled a team of building inspectors, health department officials, a tax assessor, and sheriff’s deputies who made a surprise visit to the site. Conway refers to the inspection as a “raid.”

Conway appears to have the sympathy of state building code regulators and Watauga County health officials, but he faces a series of legal and regulatory barriers if he wants to keep Turtle Island Preserve open to the public.

Conway is not your average regulatory scofflaw. He was the subject of a 2002 book titled The Last American Man and co-starred in the History Channel’s 2012 series “Mountain Men.”

But he also has become entangled in a maze of modern-day rules and codes that both make no sense and cannot be applied consistently within the primitive environment he is working to preserve. He believes that if he followed the building and health codes to the letter, they would undermine the reason for Turtle Island’s existence.

Conway has been teaching primitive living skills to Boy Scouts, families, and other groups for more than 20 years. He underwrites the operation of the preserve with paid lectures and fees for courses he teaches at the facility.

At a Dec. 5 meeting with reporters at Turtle Island, Conway, 52, said the government officials’ actions amounted to an “attack on Appalachian culture and American heritage. … They said they would press criminal charges if I don’t comply.”

But Conway is fighting back. He asked the North Carolina Building Code Council to help find a way to exclude his buildings from state building codes. “Codes don’t apply to what we are doing,” he told the council Dec. 10 at a regularly scheduled meeting in Raleigh. “Our traditional buildings have not had any health issues,” he said.

In addition to the building code concerns, the Appalachian District Health Department found several sanitation issues that need to be addressed.

The department ordered him to cease and desist activities until he has addressed the problems and obtained valid permits.

Furman shared that report Oct. 7 with Conway. On Oct, 17 Watauga County Attorney Stacy Eggers IV sent Conway a letter stating that Turtle Island’s buildings “fail to comply with the North Carolina Building Code and present a safety hazard to anyone near or around the structures.”

“Watauga County would like to work with you in bringing these structures into compliance with the applicable minimum requirements on the Building Code,” Eggers continued. “Please make arrangements to apply for the necessary permits and submit the required applications within 30 days of the date of this letter. Until the required safety improvements are made and the proper permits are obtained, you should bar the general public from being in or around those buildings, because the buildings are not structurally sound, provide no sanitary facilities, and potentially endanger the safety and welfare of those around them. This would include barring your interns from entering into these structures of being in the vicinity of them.”

Conway normally has about 10 interns living on the property. They assist with chores in exchange for learning primitive methods directly from Conway.

But Conway said his building designs are not “cookie-cutter engineering.” He started learning to build when he was a child. The structures rest on rocks — a centuries old practice. He claims that modern-day engineers, who have been college-trained, are unfamiliar with traditional methods and therefore cannot understand that his buildings are of better quality and safer than many modern structures.

Building Code Council members appeared sympathetic to Conway’s situation. After his testimony, the council directed staff to research the process for exempting the Turtle Island structures from the current regulations. But while that is going on, Conway was told that he must appeal the Watauga County ruling so that the council can conduct a formal hearing.

The report noted three significant problems with Conway’s operation: he did not have valid health permits to offer food, lodging, or primitive camping; he had illegal septic systems on the property; and the Turtle island Primitive Experience Camp has “drastically changed from the plan that was originally submitted,” and that the changes needed to be approved.

The North Carolina Department of Environment and Natural Resources has published rules for operating a primitive camp and local health departments are required to enforce the rules.

Conway told Carolina Journal that local officials have inspected the outhouses that are used by visitors, but acknowledged the outhouse adjacent to his personal residence, located far from the visitor area, has not been inspected.

But according to the health department, “Urinals are not an approved system.”

“We want to work with Mr. Conway. He was just in to see us [Dec. 12] and we gave him more information,” health department spokeswoman Jennifer Greene told CJ.

Conway first achieved national attention in 1998 as the subject of an article by Elizabeth Gilbert for GQ. The story, titled “The Last American Man,” chronicled Conway’s transition from a young boy who loved the outdoors, to a 17-year-old living in a teepee of his own design, to his college years at Appalachian State in Boone, and then to his first land acquisition in 1987 and subsequent development of his primitive skills camp so he can continue teaching others.

She also described other significant adventures, including at age 18 his travel down the Mississippi River in a handmade canoe. At 19 he hiked the 2,000-mile Appalachian Trail. In 1995, Eustace and his brother Judson completed a horseback ride from the Atlantic coast to San Diego, Calif.

Gilbert expanded that story into a 2002 book with the same title.

More recently, Conway was featured in Season One of the History Channel’s “Mountain Men” series. Presented as reality TV, the eight-part series chronicled the adventures of Conway in North Carolina, a family in Montana, and another family in Alaska.

According to the Turtle Island website, the name is derived from the Native American legend that “a great turtle rose up out of the waters after the world was flooded and made the decision to support life’s creatures on its back.” American Indians call the earth turtle island. Conway named his tract of land Turtle Island Preserve because “we are an Earth preserve. In the figurative sense, we are an island of wilderness in a sea of development and destruction.”