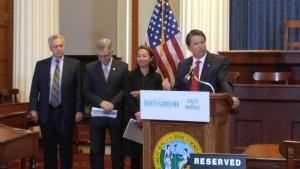 RALEIGH – Gov. Pat McCrory on Tuesday credited reforms in North Carolina’s tax code and regulatory environment as the U.S. Chamber of Commerce Foundation recognized the state for moving into the top 10 nationally in a Chamber ranking of high-tech performance and innovation and entrepreneurship.

The study ranks the top 10 states in the categories of economic performance; transportation and trade; innovation and entrepreneurship; business climate; talent pipeline; and high-tech performance.

“This didn’t happen by accident,” McCrory, a Republican, said during a press conference at the Old House Chambers in the state Capitol. “This happened through a lot of hard work, primarily in the private sector and an environment we have created in the public sector to allow the private sector to unleash the resources right here in North Carolina.”

McCrory also credited his administration’s job innovations program for the state’s high marks. He said he hopes that North Carolina will match California and the New York-to-Boston area for being known as a technology innovation region.

“It’s not an accident,” said Carolyn Cawley, managing director of the U.S. Chamber of Commerce Foundation. She said that almost every state in the nation ranks well in one of the six categories measured by the organization.

“North Carolina has ranked in the top 10 in two categories,” Cawley said. “That is really an achievement, that is really a head above.”

Cawley said the Chamber plans to spread the word about efforts North Carolina is making to provide a business-friendly environment.

Lew Ebert, president and CEO of the North Carolina Chamber, joined McCrory in crediting policy changes at the state level for the improved business climate.

“My opinion is today happens when folks like our governor and our legislative leaders make courageous decisions,” Ebert said. Previously, regulations made it a challenge for North Carolina to keep pace with other states in job creation, he said.

“We had to change to become competitive,” McCrory said, noting that two years ago, critics of the reforms were saying that they would take North Carolina backward. “The numbers speak for themselves.”

Geoff Lang, vice president for MetLife, said that since the company announced it was moving to North Carolina a little more than two years ago, the company has employed about 2,600 people in the state.

Lang said that about 15 percent of new employees at MetLife’s Cary office have moved to North Carolina from out of state.

“We didn’t recruit out of state,” Lang said. “They found us.”

McCrory said that the state can’t rest on its laurels.

“This is no time to spike the ball because the competition is still tough,” McCrory said.

McCrory also put in a plug for a $2 billion bond referendum that will be on the March 15, 2016, ballot, with about half of the money going to the state’s university and community college systems. The money would be spent to aid engineering, sciences, and medicine programs for workers who may be lagging in job skills, McCrory said

“We want to lead the nation in filling in that skills gap,” McCrory said.