RALEIGH — Blum Inc. had a problem.

In the 1990s, the international company’s North Carolina operation was running short of workers. Machinists. Technicians. Most of all, the company needed young employees who could expand the business and its bottom line.

So Blum opened an apprenticeship program.

“The idea was very simple,” Andreas Thurner, Blum’s apprenticeship manager, told Carolina Journal. “We wanted to do the same thing that we did in our Austrian [operation].”

Thurner went on to help found Apprenticeship 2000, a Charlotte-based organization that recruits apprentices for a number of businesses in the area.

In a country with a growing “skills gap,” Blum’s story is all too familiar. Universities are struggling to keep up with changing technologies, Thurner said. The lag means college graduates are unprepared for manufacturing and engineering jobs.

That means investing in apprenticeships.

Such hands-on training could be one way to close the skills gap. More than 6 million U.S. jobs are unfilled — 350,000 of them in manufacturing, the White House announced earlier this year. The U.S. Department of Labor’s National Apprenticeship Week, Nov. 13-19, is focused on helping businesses fill that void. 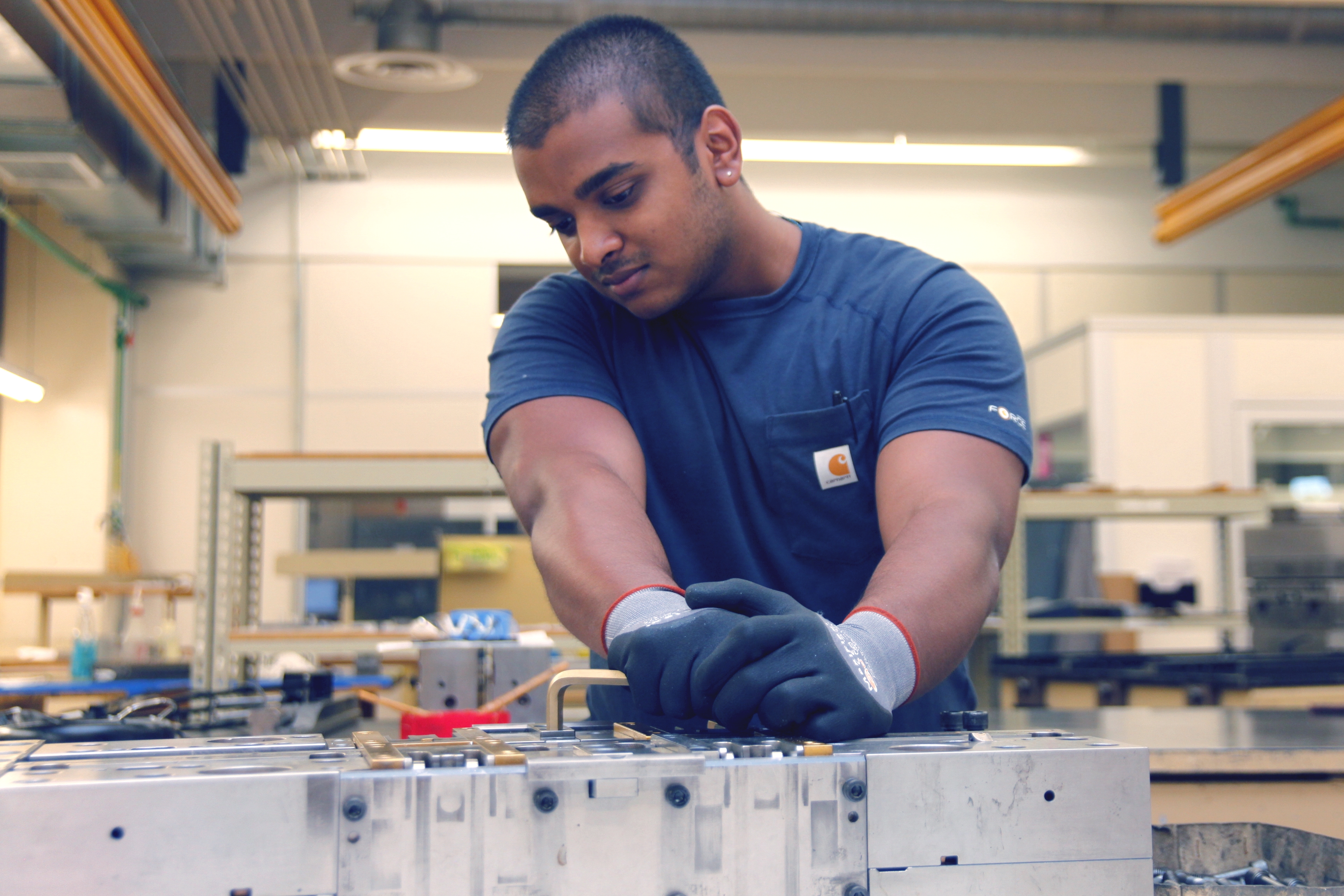 In June, President Trump signed an executive order to expand apprenticeships. His plan streamlines some regulations and rips out red tape. It also doubles federal spending for apprenticeships.

Apprenticeships should be the responsibility of employers, not the government, said Kent Misegades, vice president at Reitz Fan & Blower Inc., and a founder of the North Carolina Triangle Apprenticeship Program.

The approach is popular in Switzerland, Germany, and Austria, but many U.S. companies haven’t warmed to it. Apprenticeships are costly, a deterrent for most, Thurner said.

But companies should consider apprenticeships for their potential return on investment, he said. Thurner mentors 17 students, overseeing their work and schooling.

“When we hire people who have five or 10 years’ experience, we end up training them for up to two years to get all of these bad habits out of their systems.”

Most apprenticeships in North Carolina are pathways to careers in science, technology, engineering, and math, Thurner said.

Technical education and apprenticeships are valuable, but they shouldn’t replace a college degree, UNC President Margaret Spellings has said repeatedly. A university education is the best way for low-income students to rise from poverty, she said Oct. 30 during a speech on higher education.

The UNC system must collaborate with businesses to fill the skills gap.

That gap is far from closing.

In 2016, 2,312 students across the UNC system graduated with a bachelor’s degree in engineering. The system enrolls nearly 255,000 students.

The N.C. Department of Commerce houses an Apprenticeship and Training Bureau. That office will soon move under the umbrella of the N.C. Community College System.

“Traditional college education” is a thing of the past, said U.S. Rep. Virginia Foxx, R-5th District. Foxx, who holds several degrees — including a doctorate in teaching and higher education — served as president of Mayland Community College from 1987 to 1994.

In Congress, she chairs the House Committee on Education and the Workforce.

Apprenticeships were the original “higher education,” she said. But over the past several decades, college degrees have come to define success.

We’ve got to change that perspective, she said.

A baccalaureate degree is not the only valid form of education, and society often stigmatizes people who don’t go to college, Foxx said.

“I believe that we’ve said to people, ‘If you’re in the 70 percent or more of people in this country who don’t have a college degree, then you’re not as worthy.’”

That’s just not true, she said. Foxx in 1969 helped form a carpentry apprenticeship for her younger brother, Butch.

“I was home talking to him and he said, ‘I don’t want to go to college, but I don’t want you, and mom, and daddy to be ashamed of me.’”

“That got my attention.”

When her brother completed his apprenticeship, he had both a certificate and a career.

“Most apprentices who graduate here end up as top students in college because they’ve been exposed to the technologies all the time.”

“The most important thing is they will never be late. They will do exactly as they say. They will be reliable — because this is how business works.”

People usually need some education beyond high school. It could be a college degree, apprenticeship, or other certificate program. But lawmakers, business owners, and families should care less about the path, and more about the goal, concluded Foxx.

“Every college is a vocational college, because the end result, people hope, is a job. If we start thinking about it that way, then we are not dividing people, or stigmatizing. We need our plumbers, electricians, and nurses. All of those people need to be honored, because we can’t work without them.”