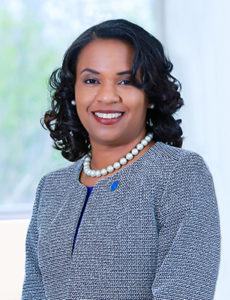 Dixon took the interim seat in April. She will assume her permanent role immediately.

“Dr. Karrie Dixon’s experience, passion, and proven track record of success is exactly what ECSU needs, and I’m thrilled that she will be the next chancellor,” said outgoing UNC System President Margaret Spellings. “As interim, she has led an institution on the rebound, and I have the highest confidence that she and her team will continue to build a bright future for a proud pillar of northeastern North Carolina.”

Dixon succeeds Chancellor Thomas Conway, who led the university from 2016 to 2018. Like Dixon, Conway served as interim chancellor of ECSU before officially taking the job. He followed Chancellor Stacey Franklin Jones, who resigned abruptly amid questions in 2015 after one year on the job.

ECSU, a historically black college catering to low-income and marginalized students, for years has struggled to gain its financial and academic footing.

Dixon has been a “rock star,” turning the institution around, said BOG Chairman Harry Smith at a news conference.

She didn’t apply for the job, but was recruited, he added.

Dixon formerly served as the UNC System’s chief of student affairs. She also worked as assistant vice provost at N.C. State University from 2004 to 2008, and was an assistant professor with graduate faculty status at the university since 2011.

“I am deeply honored and excited to have the opportunity to serve as the next chancellor of Elizabeth City State University,” Dixon said, thanking Spellings and the board. “I look forward to working with the ECSU Board of Trustees, alumni, faculty, staff, students, and the community as we continue to move ECSU in the right direction.”

The board also named Dr. Wesley Burks CEO of UNC Health Care. Burks will add that title Jan. 15 to his current responsibilities as executive dean of the UNC School of Medicine.

Burks will succeed current CEO Dr. Bill Roper, who is vacating the position to become interim president of the UNC System. Burks was nominated by Spellings.

A 30-year veteran of the medical field, Burks joined UNC in 2011 as physician-in-chief of the N.C. Children’s Hospital. He became UNC medical school dean in 2015.

“It is the highest honor to serve these amazing institutions as CEO and dean,” Burks said. “I look forward to working with many people, especially our talented team, to develop and communicate a strategic vision and long-term goals for the institution, while strengthening our national and international standing.”