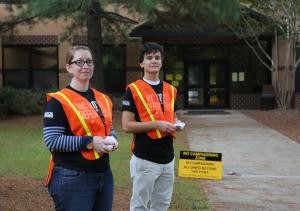 A group of college students and other young adults — some with connections to Moral Monday protests — has formed to monitor polls, provide information to voters about election procedures and laws, and counter what they see as potential voter suppression.

The group — NC Vote Defenders — organized in the summer, said Scott Davis, a spokesman for the group. Davis and Emily McGuire were at the Leesville Road Elementary School precinct in Raleigh handing out pamphlets to voters participating in the city’s municipal elections and area bond referendums.

They were at two other precincts in Wake County Tuesday. The group’s director, Bryan Perlmutter, was in Elizabeth City, along with other volunteers, handing out similar pamphlets. (See Editor’s Note at the end of this story.)

Both Davis and Perlmutter said they were unaware of any voter suppression efforts in Wake or Pasquotank counties Tuesday. The group plans to provide volunteers to monitor voting precincts in Mecklenburg and Watauga counties during November’s municipal elections.

Neither NC Voter Defenders nor Ignite NC turned up on searches of the N.C. Secretary of State’s corporation website or Guidestar.com, which provides information on nonprofit corporations.

The advisory board is comprised of Sotak, organizing director of the left-leaning watchdog group Democracy NC; Anita Earls, director of the Southern Coalition for Social Justice and a former member of the State Board of Elections; John Gilbert, former chairman of the Wake County Board of Elections; and Sonia Gill of the Voting Rights Project of the Lawyers Committee for Civil Rights Under Law.

Davis said the group hopes to serve as an advocate for anyone facing voter suppression, but otherwise plans to offer straightforward information to voters.

Davis described the pamphlets the group was distributing Tuesday as “nonpartisan information about what voting laws are going into effect in the next couple years” that also make “clear that almost all of those laws haven’t gone into effect this year.”

Davis, a recent UNC-Chapel Hill graduate who now lives in Raleigh, said the group’s role was to prevent confusion about the new voting laws and when they take effect.

“They see in the news that [lawmakers] passed this big voting bill and some people are confused that they may need an ID this year, or maybe their sons or daughters are students and can’t vote because their student ID won’t work,” Davis said. “We’re just trying to make sure that everyone knows that those laws haven’t gone into effect yet so they can still go out and vote like they used to.”

The pamphlet includes information ranging from the new requirement for voters to provide a state-authorized voter identifier at the polls — which will be in effect during the 2016 elections — to changes in voter registration, residency requirements, early voting, absentee voting, and provisional balloting. It also informs voters that they are allowed to take a list of the candidates they prefer into a polling place but they can’t leave the list for others to view. It also notes that voters who are disabled, have a language barrier, or need other assistance at polling places can get it.

The document lists times polling places are open, and suggests the best times to find shorter lines during early voting and on Election Day — from 9-11 a.m. and 1-3 p.m. weekdays. And it notes that cell phones and cameras are not allowed in voting rooms.

It also reminds voters of election law changes coming in 2014: There’ll be one less week of early voting, mail-in absentee voting will require an ID number, same-day registration won’t be allowed, you also won’t be allowed to vote a straight-party ticket any more.

Davis said NC Vote Defenders received training for their work at polling places and were instructed about voting laws and the ones that would be changed.

“We’re also here to watch for any voter suppression or any kind of poll workers who are telling people misguided or wrong information,” he said.

He said there were some problems with same-day registration during early voting in Elizabeth City, where seven students mistakenly were told they couldn’t register because of their on-campus residency. However, those students were allowed to return, register, and cast their ballots, he said.

Davis said the group worked with the state chapter of the NAACP to provide training in Elizabeth City.

Editor’s Note: After this story was posted, Carolina Journal learned that NC Vote Defenders founder Bryan Perlmutter is affiliated with the North Carolina Student Power Union, a group of university students that, according to its website, has “adopted a long-term strategy of building unions. These unions would do what student governments don’t and could never do — organize students on the campuses to act collectively in our own interest and take the power back from the administrators and the corporate interests that they represent.”

Perlmutter also was arrested at the May Day protest and produced a video prior to his anticipated arrest (see second post on page).

Cooper doesn’t seem to get it, even as he vows to loosen most restrictions June 1