Perdue to Inherit Bed of Thorns 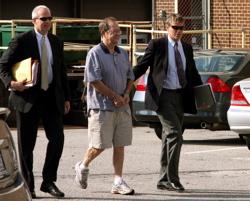 When Beverly Perdue replaces Gov. Mike Easley on Jan. 10 she will inherit serious problems with North Carolina’s probation, mental health, and transportation systems, as well as a major budget shortfall.

She also will face some embarrassing public corruption scandals and other problems that took place under Easley’s reign that will likely require her attention. Here are five:

In 2003, with the strong backing of Senate President Pro Tem Marc Basnight, the General Assembly authorized NCDOT to establish a new passenger ferry service across the Currituck Sound in northeastern North Carolina. The project came to a halt in 2004 after federal officials determined that Ferry Division officials dredged a channel without permits. Four employees pleaded guilty to the illegal dredging. A federal jury convicted Ferry Division Director Jerry Gaskill of making material false statements in the course of the investigation.

In addition to the criminal charges, in February 2008 the federal government filed a $3 million civil suit against Gaskill, former Ferry Division supervisor Billy Moore, and the NCDOT for damage caused by the illegal dredging. Attorney General Roy Cooper and Perdue will have to decide whether to fight the suit or to settle the claim.

Boyce A. Hudson, 67, a former state environmental official, pleaded guilty in federal court in May to extortion and money laundering in connection with his efforts to help the failed ethanol production company, Agri-Ethanol Products obtain environmental permits through the Department of Environment and Natural Resources. Hudson was sentenced to 40 months in prison.

Federal prosecutors have linked AEP investor Thomas “Ricky” Wright, a Wake Forest businessman, and Democrat fund-raiser to the case. Sources told CJ that Brady and Perry are planning to fight the charges. The case might lead to other state officials.

The failed Randy Parton Theatre in Roanoke Rapids was one of North Carolina’s most unusual economic development projects.

Regional state economic developer Rick Watson recruited Dolly Parton’s brother Randy to North Carolina in 2005. Watson acquired an ownership interest in Parton’s new company, Moonlight Bandit Productions. Parton invested none of his own money, the city borrowed $21 million, and about $6 million in state funds were used to launch the project. The theater opened in July 2007, but by December 2007 the city’s relationship with Parton was over.

Parton has received a federal subpoena, but CJ was unable to determine whether he ever testified. Raleigh criminal defense lawyer Wade Smith told CJ that he is representing Watson in a federal investigation.

Easley served as chairman of the Global TransPark Authority for eight years, but there is little evidence that he was actively involved in the struggling state-owned industrial park situated at the former Kinston airport. Perdue will appoint the next chairman, or she might take that role herself.

The GTP annual operations budget is about $2 million, with most of the money coming from the General Assembly. To help fund the project, years ago the legislature authorized the GTP to borrow money from the State Escheat Fund, an unclaimed financial asset account managed by the state treasurer. The interest and principal have grown to more than $32 million.

State Commerce Secretary Jim Fain, who was heavily involved in recruiting Spirit AeroSystems to the GTP last year, told CJ that he was not sure how the GTP would repay the $32 million.

In April 2007 Carolina Journal, The News & Observer of Raleigh, the Charlotte Observer, the Fayetteville Observer, and the North Carolina Press Association sued Easley over his administration’s policy allowing the systematic deletion of official government e-mails. The groups said the Easley’s administration’s policy is a violation of the state’s Public Records Law and deprives the people of North Carolina of access to information and records. Attorneys for the both sides continue negotiations, but they have not reached a settlement. Perdue has promised that she will allow complete access to public records.