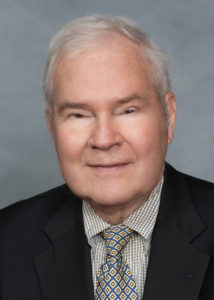 Sen. Louis Pate, R-Wayne, is part of a vanishing breed of politician, friends and colleagues noted. He put his life on the line as a Vietnam combat veteran, but was a quintessential Southern gentleman who fought firmly but politely in the General Assembly for principles and policies he believed in.

Pate, an energetic worker on military and health care issues, is stepping down. He recently started his fifth term in the North Carolina Senate after serving four terms in the House. He was deputy president pro tempore, and served as chairman of the Senate Health and Human Services Committee.

Attempts to reach Pate for comment weren’t successful. But accolades about his gentility and political prowess surfaced quickly.

“Senator Pate’s leadership and personal touch made this body more effective, and for that every Senator should be grateful,” Berger said in a news release. “I know his legacy will continue to impact this body in the years ahead. It has been a privilege to serve the people of this state with a man of such character as Louis Pate.”

“He’s always traveled across the state to visit with members and their families, and that personal attention to others helps make the Senate more collaborative,” Hise said. “He’s also a brilliant mind on healthcare and worked to reshape North Carolina’s Medicaid policy for the better.” Those Medicaid reforms ended billions of dollars of cost overruns.

“Senator Pate was an expert on Chinese food. He’d always take some folks over to Red Dragon, and then he loved to go to Baskin-Robbins afterwards for some ice cream,” Tucker said. “Maybe that’s why I weighed so much when I was up there.”

“During my years in Congress, Louis contacted me frequently on issues that were important to constituents in his Senate district. He worked tirelessly for the betterment of all citizens that he represented,” Hayes said.

Pate’s replacement will be selected by the Republican Party executive committees in Wayne and Lenoir counties. They will forward their recommendation to Cooper, according to Berger’s office. The governor has 10 days to approve the nominee — which is essentially a formality. If Cooper fails to act, the recommendation takes effect.

News of Pate’s health complications came to light in his 2018 re-election campaign when he sent a letter to his constituents announcing that would be his final run, and conjuring Mark Twain’s retort about rumors of his death being exaggerated.

“We want to address some terribly mean-spirited rumors my political opponents are spreading about my health and my campaign,” Pate wrote. “First, I am not dead — not even close. As many of us know, getting old isn’t always easy or fun. I have recently been diagnosed with a condition that has kept me from getting out on the campaign trail as much as I usually do.”

A former Mount Olive mayor and city councilman, Pate served four House terms between 1995 and 2008. He joined the Senate in 2011.

According to Berger’s news release, Pate “quickly developed a reputation for humility and dignity with every person with whom he interacted, from junior staff to legislative leaders. He always remembered personal details about the lives of others, often recalling that information when checking in about one’s family and activities.”

The release said “in a period marked by increasing partisan rancor, Senator Pate stood out for his tact and the esteem in which he held his colleagues.”