The shows at the old Randy Parton Theatre will go on, in some form or another.

The city of Roanoke Rapids on Monday, July 23, officially transferred the Roanoke Rapids Theatre to new owners Thomas McLean and his wife Evon of Chocowinity. The McLeans are buying the 35,000-square foot, 1,500-seat facility for $3 million.

City Manager Joseph Scherer told Carolina Journal the city owed about $15 million on the project before the McLean payment. Several previous attempts to sell the theater have fallen through.

The re-opened facility will be a “multi-purpose dining, entertainment, and performance venue [that] transforms into a premier travel destination anchoring the I-95 corridor in Halifax County,” a news releases says.

The new owners plan to hire 25 full-time and 25 part-time employees. The first show is set for late September, though details weren’t immediately available. Acts will range from music to movies to car shows, the promoters say.

The transfer took place as part of an informal ceremony in the theater lobby. City officials and several interested residents attended. 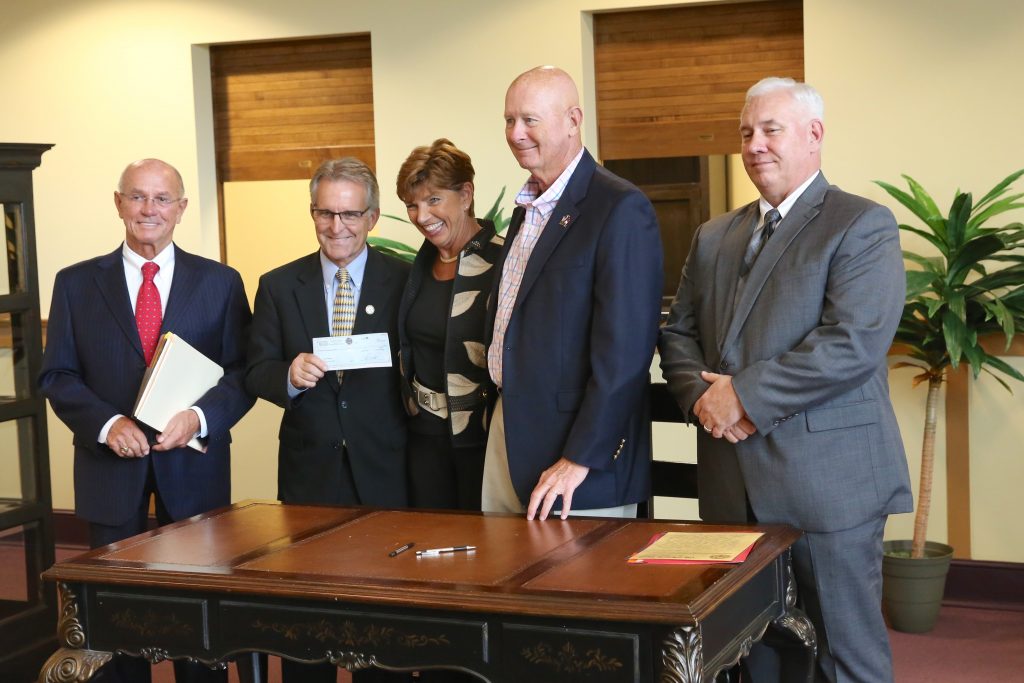 “In the nine years I have been mayor I have not had a more positive outlook [for this theater]. The McLeans have been good to deal with,” Mayor Emery Doughtie said.

In November, the McLeans started negotiating the purchase with the city. Evon McLean’s son Beau Petty, also of Chocowinity, will play a key role in managing the theater.

“We need to get maximum use out of this facility,” he told CJ.

“The theater is like a 10-year-old car that has been garaged. We are going to drive it right down the interstate,” French West Sports & Entertainment Practice President Jack Glasure told the crowd.

He said they an event calendar, soon to be released, will cover a two-year period.

The Raleigh-based office of East Coast Entertainment, which says it’s “the largest, full-service entertainment agency in the country,” will book acts for the facility. ECE agent Andrew Walsh attended the ceremony.

The project became public in July 2005, when the N.C. Northeast Partnership, a 16-county, state-funded regional economic development organization, announced “Randy Parton, brother of mega-star Dolly Parton, inked a deal with private developers and the city of Roanoke Rapids for development of a music theater and entertainment district” along Interstate 95.

The theater was to anchor an entertainment district, including shops, restaurants, motels, and family recreational activities. The first phase, covering 116 acres, would attract $129 million in private investment and create 2,595 jobs, based on an economic impact analysis by researchers at the Carolina Center for Competitive Economics at UNC-Chapel Hill. The researchers also predicted the project would produce 12,250 jobs for the region.

Northeast Partnership CEO Rick Watson developed the concept for the theater and recruited Randy Parton to participate. Watson persuaded Roanoke Rapids officials they were competing with other North Carolina communities in his 16-county region to land the project. Watson’s conflict of interest became public after CJ revealed he had a one-third ownership interest in Parton’s company, Moonlight Bandit Productions. The partnership’s board of directors terminated Watson in 2006 for working for Parton while still being paid for his state-funded economic development job.

Parton invested none of his own money, the city borrowed $21 million, and state agencies added about $6 million to launch the project. State Senate leader Marc Basnight, House Speaker Jim Black, and the Department of Transportation under Gov. Mike Easley championed the project.

City officials had bet on Parton’s ability to manage the theater competently and attract enough customers to cover expenses. Before coming to Roanoke Rapids, Parton played at the Dollywood Amusement Park in Pigeon Forge, Tennessee.

The theater opened in July 2007 as the Randy Parton Theatre. Parton performed with his newly formed band Moonlight Bandits. The first shows were well-attended, but the number of empty seats grew steadily over the next few months. Some nights fewer than 100 people showed up.

On Dec. 6, 2007, just as Parton was getting ready to take the stage, city officials determined he was under the influence of alcohol and sent him home. He never performed at the theater again, and the city renamed the facility the Roanoke Rapids Theatre.