Hall has so far blown off three scheduled confirmation hearings.

The separation of powers showdown is already embroiled in litigation as Cooper tries to block what the Senate contends is clear constitutional authority to confirm his Cabinet appointees on an advise-and-consent basis. An even more pitched partisan battle ensued Thursday as tempers flared and accusations flew.

Ultimately, on a 14-4 hand vote, the committee voted to issue the subpoena requiring Hall to testify before that body at an 11 a.m. meeting March 2 about his qualifications for the job, potential conflicts of interest, and willingness to follow the law.

“It will be served by General Assembly police,” said Sen. Dan Bishop, R-Mecklenburg.

General Assembly Police Chief Martin Brock did not respond to a phone call about serving the subpoena.

Bishop said he hopes Hall willfully complies, but he would not speculate what action could be taken if he doesn’t.

“We will see. So all the twists and turns may not be done,” Bishop said. “We’ll see what other convoluted reasons are brought up now. But the straightforward thing to do is to abide by the subpoena, and appear, to avoid causing the controversy to deepen.”

The extraordinary measure to issue a legislative subpoena shows just how high the stakes have become.

“I believe there have been some, but it is pretty rare,” said Gerry Cohen, former special counsel to the General Assembly.

“In 2010, the Senate Judiciary II Committee issued subpoenas to UNC-TV and one of its reporters,” Martin said. “I have no information on whether there were others before 2010.”

“I would not tolerate that in any committee I chair. I would not tolerate a person remaining in the position. It’s not an option to say as a secretary, ‘I don’t like what the committee is about to discuss, I’m going to choose not to come today.’ Unacceptable,” Hise said. He called for stronger action to address Hall’s “willful disrespect” of the Senate.

“We have reached a point that the executive branch is challenging the constitutional authority of the General Assembly, and specifically the Senate. We must take absolute action to make sure that we do not lose that authority given to us by the people and the [state] constitution,” Hise said.

He then raised the irony that Hall voted against creation of the position he now holds. 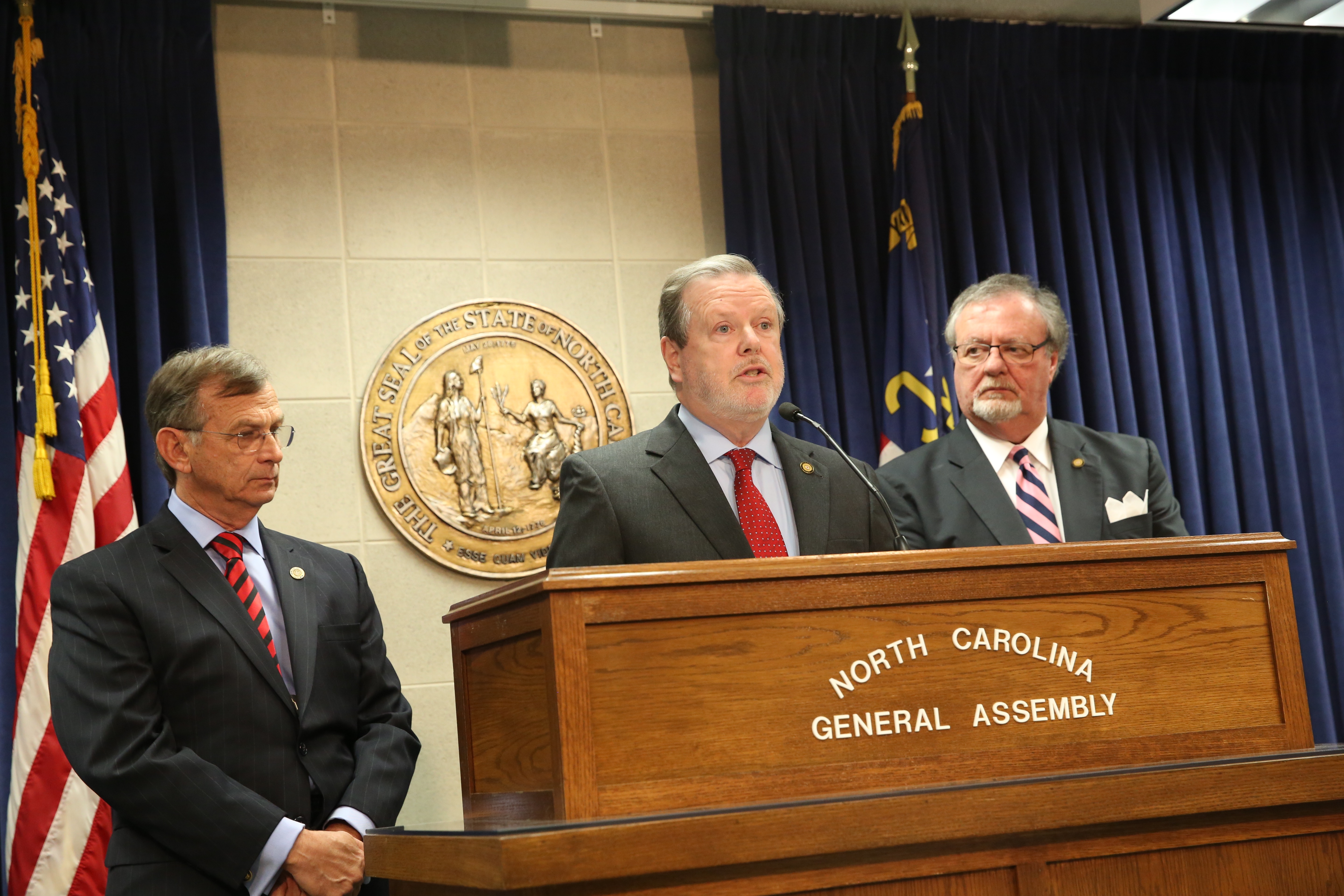 “Giving the people of this state an opportunity to learn about unelected department heads who will control billions of their tax dollars is not something anyone should be fighting,” Berger said.

Berger said Hall’s repeated failures to appear for a hearing is creating “a real concern about whether the governor’s secretaries are willing, or will be allowed by the governor to follow the law. For whatever reason the governor has turned this into one of the biggest political fights of the year. It makes us wonder what on earth are they hiding.”

He read the oath of office Hall took when he was sworn in to his position, and said: “He will be bound to uphold that oath, and comply with the subpoena, even if the governor acts like Richard Nixon and orders him to break the law.”

Debate in the Commerce and Insurance Committee became heated shortly after Chairman Wesley Meredith, R-Cumberland, began discussion on how to address Hall’s refusal to appear.

“At this point Secretary Hall and his boss are openly defying not just the legislative legal authority to call witnesses to committee, but the very, very plain language found in the North Carolina constitution,” Meredith said.

“If this committee is going to follow the law, which we fully intend to do, and perform its duties to confirm Secretary Hall, it must use the tools it has available,” Meredith said, asking for a motion on how to proceed. Bishop then introduced a motion to consider issuing a subpoena.

Sens. Floyd McKissick, D-Durham, Angela Bryant, D-Nash, and Erica Smith-Ingram, D-Northampton, contended in multiple ways that a confirmation hearing would be illegal due to a court order from a Superior Court three-judge panel hearing Cooper’s lawsuit.

They cited language in the judges’ findings of fact that Cooper has until May 15 to formally provide the names of his nominees to Berger, as Senate president pro tempore. That clearly shows no confirmation hearings can be held until that trigger action occurs, they claimed.

Bishop, Hise, and other Republicans countered that the Democrats’ were misreading the court ruling. They said Cooper’s nominations came as vacancy appointments while the General Assembly was out of session, so different statutes apply. Cooper doesn’t have to formally nominate an out-of-session appointee, allowing the Senate to take up confirmation upon return to session.

Later in the day Berger’s office released a list from the Cooper administration to be included in a Senate legislative directory that included his Cabinet secretaries. All eight secretaries he has named were designated with the title secretary. The two he has not named were listed as “acting secretaries.”

“This quashes arguments made in the Senate Commerce Committee today that the governor considers all of these folks interim/acting secretaries,” said Berger spokeswoman Shelly Carver.

Bishop said the court order Democrats used to defend Cooper and Hall was in a case in which the governor was seeking a preliminary injunction after a temporary restraining order was issued to prevent the committee from carrying out its duties.

“When the preliminary injunction ruling came down the judges were befuddled” how it was perceived a temporary restraining order could be issued to bar the Senate from exercising its constitutional functions, Bishop said.

At one point, Senate Minority Leader Harry Brown, R-Onslow, was incredulous that McKissick contended Hall was not officially serving as the nominated secretary. In rapid-fire succession he quizzed McKissick about all the functions Hall is fulfilling.